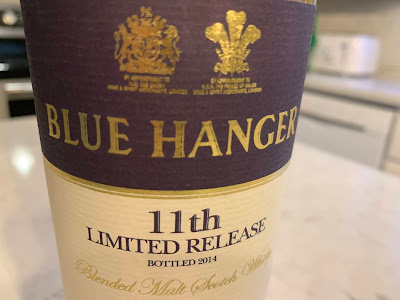 Berry Bros. & Rudd are the oldest wine and spirits merchant in the United Kingdom.  Established in 1698, initially selling coffee, the firm gradually expanded into and wine and spirits.  It's the latter that draws our attention.

This independent bottler can be visited today at their retail shop at 63 Pall Mall, which they moved into in 2017.  The previous retail premises, located at 3 St. James', that has been occupied by the firm dating back to 1698, now serves as their corporate offices in London.

This independent bottler puts out some interesting single malt and blended malt releases.  They have enormous stocks of single malts acquired from largely uncommon distilleries over the years, and after some expert cask aging, malt selection and blending, you get to try whiskies that are interesting, often obscure and of high quality.  One such series, Blue Hanger (launched in 2014), is a blend of single malts.  Blended malt production involves a vatting process (re-casking into a single container) that hopefully allows the flavors of the individual malts to compliment each other when married by the master blender. 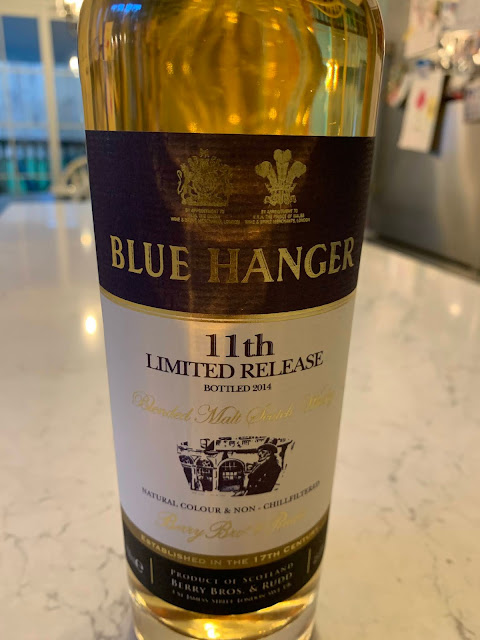 While this 11th Limited Release doesn't have an age statement, it does have some other impressive qualities.
Bottled
2014
ABV
45.6%
Natural Colour?
Yes.
Chill-filtration?
No.
Category
Blended Malt.
Format
700ml.
Nose (undiluted)
White Bordeaux, gentle peated tendrils of aroma drift upwards, oranges and other citrus scents.
Palate (undiluted)
Spiced oak and malt, lemon drop sweetness, wild honey, dried orange peels, tart crab apples, golden barley, creamy Swiss chocolate.
Finish (undiluted)
Medium length of feather light licorice, peat, flint, grapefruit and lemon zest.  There is also a graphite, mineral, lead note with smoke that remains.
General Impressions
While there is no age statement, I am unconcerned in the sense that I am not tasting any youthful whiskies that bite or kick jarringly upon the palate.  This whisky is balanced, pleasing, good, but not great.  Why?  It lacks some complexity.  Consumed neat at 45.6% ABV is a bit too much for me.  So, I add water which improves this blended malt, but still given the price I paid (not cheap!), it should have some pizzazz.  With just a couple drops of water it improves.  Becomes creamier and draws out a custard note.  The finish becomes more lemony like a lemon meringue pie.
The ingredient malts are purportedly peated and unpeated Bunnahabhain, Aultmore and I taste some Teaninich.  The combination of these malts from a vatting of 8 casks (4 hogsheads, 3 sherry butts and 1 puncheons) somehow fails to live up to the promise and reputation of Blue Hanger.  This release was named after a loyal customer, William Hanger, the 3rd Lord Coleraine, a dandy who dressed always in blue.  I wonder if he might find this blended malt a bit too foppish even for him, and his midnight blue velvet frock coat.
Best,
Jason Debly
Jason Debly at 2:05 PM
Share