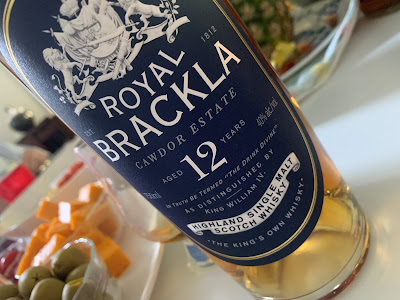 In the Scottish village of Cawdor you will find the Royal Brackla distillery that was established in 1812.
Royal Brackla is an obscure distillery that has generally made rare and largely unnoticed appearances in releases by independent bottlers. In 2015, the distillery started to release its single malt.  While you are probably not familiar with this distillery, you have tasted it a bit if you ever tried any Dewar's whiskies, as it is an ingredient malt in their blended Scotch releases.
Category
Single malt Scotch whisky.
Region
Speyside.
Closure
Cork stopper.
Age Statement
12 years.
ABV
40%
Chill-filtration?
Yes, I think so.
Artificial Colour?
Unknown.  I think in 2020 they announced to have natural colour but no such declaration on the bottle.
Wood Management
I visited the website and it states that the 12 year old is finished in oloroso sherry casks.  So, that means it was not aged for a full twelve years in those casks.  Finishing is much shorter period of time.  Maybe six months to two years.  This impacts flavor and potential for complexity.
Nose (undiluted)
Piercing, concentrated citrus notes.  Sea air.
Palate (undiluted)
Oranges, vanilla, and then old English cheddar.  White pepper and charred oak.
Finish (undiluted)
Medium length. Tangerines, some milk chocolate, lemon and ginger root and then the cayenne pepper turns bitter.
General Impressions
A straight forward sherry cask dominated single malt.  Adding water only made it bitter.  This single malt is a bland presentation of sherry cask influenced malt whisky.  There was no complexity of flavor exhibited by the spirit.  A very mediocre sherried malt that is understandably used for blending of Dewar's, which happens to be a very mediocre blended Scotch brand.
Not recommended, unless you picked it up really cheap.
Best,
Jason Debly
Jason Debly at 3:24 PM
Share