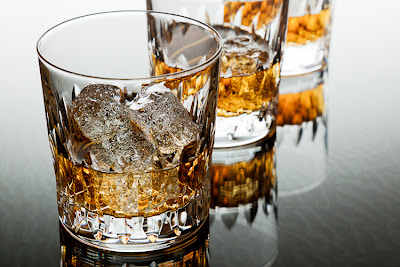 The love that dare not speak its name in many whisky circles is the amour for ice with one's whisky.

Presently, I am living in the midst of a serious heat wave with temperatures approaching 100 degrees fahrenheit and 70% humidity contributing to sauna like air quality.  I love it though.  I dig the heat.  Probably because I am not working as a roofer hammering shingles or raking asphalt across driveways.  Moreover, I am on vacation.  Beside being poolside, what contributes to my good humour is drinking my whisky with ice.

Shocking!  The horror! Say it ain't so!

That would be the thoughts and attitudes of the whisky purists out there and the critics who get paid for what they write.  I don't care.  Those people are disconnected from you and I.  They make too much money, and are a little too arrogant for my liking.  They can have their 30 year old, limited release malts, and choke on them in this balmy weather.  I cannot think of anything less appealing than single malt Scotch whisky served neat at temperatures approaching a sweltering  noon hour in Doha.

When it is a really hot summer's day, I like to enjoy a good blended Scotch whisky and even certain single malts with an ice chip or even a whole cube!  Why?  Because it is so damn refreshing.

I just love reaching for a sturdy tumbler, tossing in an ice cube, pouring some Teacher's Highland Cream, Johnnie Walker Black Label, Black Bottle or other blend and waiting about one minute.  During that agonizingly long minute that little ice cube is knocking down the temperature of my whisky, and smoothing out the rough edges, and maybe allowing for a little nip, where there used to be some bite.

Finally, I take a sip, having exercised the patience of Job.  For my forbearance, I am rewarded by a delightfully refreshing taste of chilled whisky with snips of smoke, seaweed, brine, salt and whatever flavors make up my selected spirit.  Yes, I suppose it is not very complex, and nosing the whisky is pointless with an ice cube floating in my tumbler glass, but I do not care.  I am seeking Margaritaville, not a bookish, desperate for whisky nirvana, all-senses focused malt experience.  Save that for the winter time when I am hiding inside from the snow blown wind-chill factor outside.

In the first few minutes, your ice cube works wonders on your whisky.  But, there comes a point where your whisky has become overly diluted.  Worry not, it is now whisky slush.  Drink up!  Or dump it out and start anew.

I also like that there is something very casual about ice and whisky.  The combination seems to provoke casual, light hearted conversation.  Something we can all benefit from.

Ice and Single Malt?
Yes it does happen.  Don't be embarrassed.  You can admit to it.  It's not like I am referring to your experimental phase in college with your roommate.

I will add whisky to cheap single malts and expensive ones that I did not like neat.  For example, last night I had this bottle of Longmorn 16 that had been sitting on my shelf for about eight months.  Why?  Not a fan.  Just didn't really enjoy it.  So, I thought, Mr. Longmorn, you are a candidate for an arranged marriage with my ice tray.  The result?  Really nice!  The bite and rather barnyard action was taken away by the ice, leaving some nice nips on the tongue of pepper, chocolate are caramel.  It went down easy and was very interesting.

So, I challenge you to survey your single malt collection.  Is there one you have not been enthralled with?  If so, drop a cube in, set out on the deck, take in the sun, and your iced malt.

Whisky Festivals - Where's the Ice?
I have been to a few whisky festivals and I have not seen any buckets of ice, alongside neatly lined up legions of bottled water.  Matter of fact, even if there was some ice to be had, it wouldn't get past the mouths of those pouty Glencairn Glasses.  What gives?  Let's add some jolly, slack-jawed tumblers too.

Whisky festivals are supposed to be a celebration of all things whisky.  Spirits companies showcase their finest fire water with knowledgeable, smartly dressed and attractive brand ambassadors, who typically squeeze in an interesting tidbit of info as they pour you a dram.

"Aged in French oak, not American" declares an ambassador who could pass for an Armani runway model. She is just way too pretty to be a serious whisky fan, I think, and then I ponder if I am being sexist.  Anyway, my point is whisky lovers have an affinity for Harris Tweed jackets, tartan wool ties, pilled poly-cotton, navy pants with the built-in crease that all contributes to a certain disheveled, professorial look, without the academic accomplishment.

"Really?"  I say like I care, even though I just wanna taste the damn stuff as quickly as possible, while noting her androgynous sartorial flair, and wondering if this conversation may evolve into an awkward scene out of The Crying Game.

"The French oak has a certain je ne sais quoi.

"No" is Ms. Holly Golightly's arctic reply that sufficiently cools my drink, dampens my enthusiasm, and causes me to move onto the next booth.  Probably not what the drinks company wanted as an outcome of a potential customer interaction with their product.

Where is the ice for the whisky fan who drinks it with that frosty accompaniment?  Surely, they know that there is a large segment of the public that adds ice.  The marketing arms of these drinks companies research every aspect of their consumer with a view to attaining increased market share.   They know that many consumers like a little ice.  What's going on here?

I will never be a brand ambassador.  You know why?  I'd have tumblers and ice at the ready, at my employer's kiosk.  I'd ask you:  "Would you like ice with your whisky?"  I am sure some whisky snobs would regard such a question as akin to: "Would you like fries with that?"  A letter would be written to my employer and I would find myself unceremoniously kicked to the curb in my sartorially challenged powder blue polyester tux with black trimmed lapels and handy flap hip pockets. 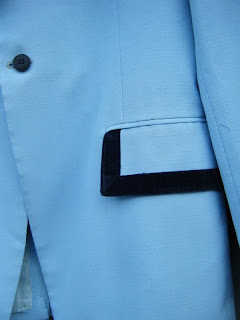 Why can't the drinks companies get it through their thick skulls that some people like ice with their whisky?  They wanna increase sales, market share and all that right?  Well, get with the program and have it on hand at festivals.

I mean if I was representing Diageo, Chivas Bros, Edrington Group, etc., at a festival and proffered ice for those who wanted it, its not like I am doing something outrageous.  Well, to some my conduct would be tantamount to smearing peanut butter on my chest, rolling in shards of broken glass and then diving off a stage into a crowd  à la  Iggy Pop. 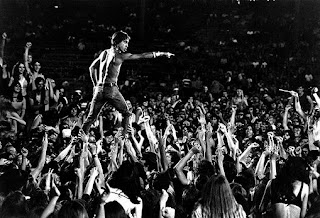 And, that's the problem.  The fear of taking a chance.  The fear of criticism.  Whisky companies for some reason are very conservative and are fearful of jumping into the mosh pit of whisky fans by offering the possibility of ice at festivals.  Funny how any bartender or waiter will ask almost immediately if you want that on the rocks.  They are more in touch with the ordinary customer.

Let's start a revolution.  At the next whisky festival, invariably held in a hot and sweaty hotel ballroom, ask for ice with your dram!

Jason Debly
Copyright © Jason Debly, 2009-2013. All rights reserved. Any and all use is prohibited without permission except for photographs, as they are the intellectual property of the photographers, and may not be reproduced without their permission.  Photo credits:  (1) photograph of whisky and ice taken by Martin Price.  Please visit his site to explore more of his great work.  Martin Price holds all worldwide copyright and no reproduction is permitted without his express written consent.  His photograph appears here with his gracious consent; (2) Photograph of powder blue tuxedo up for sale on Etsy and taken by member Sugarshackvintage;  (3) Photograph of Iggy Pop at the 1970 Cincinnati Pop Festival.  This photograph is widely available on the internet, but unfortunately I have not been able to identify the photographer.  I would like to give credit.  If you know who it is, please drop me a line.  In any case the image appearing in this article is for the purposes of nostalgia, education and entertainment. Moreover, all images on this blog are considered by the author to be significant in illustrating the subject matter, facilitating artistic/critical commentary, as it provides an immediate relevance to the reader more capably than the textual description.
Posted by Jason Debly at 10:39 AM 31 comments: