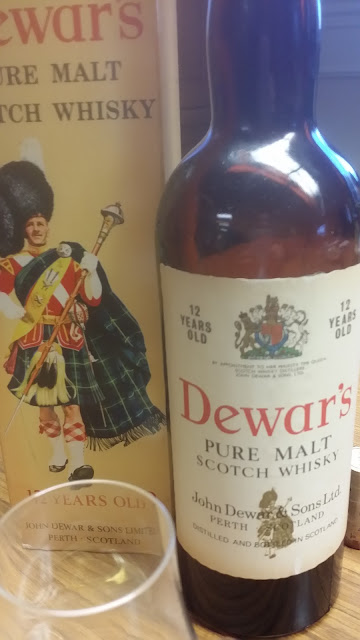 A member (Whisky Dawg Bob) of the whisky club I belong to was given a bottle of 12 year old Dewar's Pure Malt Scotch Whisky (long since discontinued) that was bottled sometime in the 1980's.  Matter of fact, the fellow who gave him this old blended malt soldier has a case of it in his musty basement.  In any event, we were having one of those meetings where everyone just brought an interesting bottle, as the club funds had been exhausted due to costly purchases made by yours truly for the last meeting.

I was intrigued.  A bottle that sat in someone's basement for over thirty years was now on my coffee table.  The bottle had a simple twist off metal cap.  No cork.  Could air have gotten in and spoiled the whisky?  I was mesmerized.

I made sure it was the first drink of the night, as I wanted to really appreciate this whisky.  What made this pure malt interesting was that it was an old release, and an unexceptional one.  No cult following for Dewar's Pure Malt.  It is not a single malt, so not terribly collectible.  I suppose there is a market for old bottles of blends, but not like a Macallan from the 80's.  Again, I must say I was intrigued.

I twisted the metal cap off, which gave some resistance, a good sign I thought, and then proceeded to pour a dram.  On the nose, I was not picking up much.  Some apples and dandelion.  That was about it.  Nothing impressive.  I took a sip and was immediately rewarded with plenty of fresh orchard apples, honey, a wee lemon and pancakes drizzled in maple syrup.  Wow!  Right in my wheelhouse.  I was happy.  Weeks later, I sampled this bottle some more and was not disappointed.  Very balanced and the flavor profile was identical to the first tasting.  A solid drink. 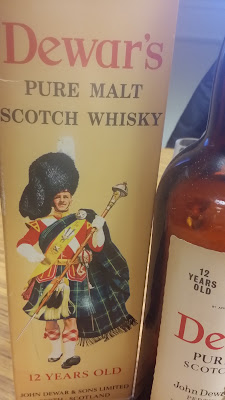 This bottle came complete with the original cardboard packaging.  Wow!  I mean this was printed up at the same time Bob Newhart was on television and Reagan was in office.  A real time machine.  I was blissed out by this pure malt.  I must say that I am a fan of pure malts anyway and wish there were more on the market.  Oxidation was not an issue.  The seal was intact for 30 some years.

Bottom line:  If you get the chance to sample an old bottle of any whisky, you may be delighted, and don't fear the metal twist off cap.  It can keep the air out just as well as the cork stopper and maybe better in the sense there is nothing to dry up, crumble, fall in the spirit and ruin it.

P.S.  This blog has recorded over 4 million hits and I just wanted to say thanks to you for continuing to visit and read my posts.  Much appreciated.
Posted by Jason Debly at 12:04 AM 8 comments:

Te Bheag
Pronounced 'chey-vek' (Gaelic word meaning wee-dram).  This brand is produced by the small, independent company, Pràban na Linne Ltd., located on the Isle of Skye. The same company that puts out a delightful blended malt, Poit Dhubh, which I recently reviewed. Due to the small size of Pràban na Linne Ltd. distribution of Te Bheag is not on the scale of other competing blends (owned by much larger multinationals). It is available in Canada, the UK, parts of Europe and some limited availability in the US.

Non-Chill Filtered
For those of you who are convinced that chill filtration strips away fatty-acid esters that contributes to subtle flavors and oily texture, have no fear, this whisky is not chill filtered. As for artificial coloring with E150, I am unsure, but suspect that if they do not chill filter then it is likely they don't color their whisky.

General Impressions
This is priced higher than Teacher's Highland Cream and Black Grouse, but it is sure a lot better.  I liked this blend when I first reviewed it five years ago (click here) and I still like it today.  'Like' is too light, it doesn't convey my continued excitement for this great blend.  If this whisky is available where you live, I would highly recommend you consider it next time you want an affordable blend that punches way above its' weight.

Jason Debly
Posted by Jason Debly at 12:40 AM 7 comments: