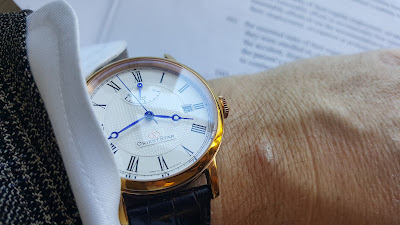 What time is it?

I gotta leave work.  Leave this soul crushing drudgery behind till tomorrow.

You ever get that feeling that you were meant for so much more in life and one day it dawns on you that . . . shit . . . this is it!  WTF?  I didn't sign up for this.  But, actually I did.  Ahh well, life's regrets and before we know it, we got bills, overhead, whatever we wanna call it and a guy can think he is kinda trapped.

I have a real button-down type of occupation and some days I think, how did I get here?  And, I know I am not a victim because I put myself here.  Some good decisions and some bad ones.  But, if I have learned something, I can tell you this:  every time I do something for the money I always regret it.

Ok, enough of the rant.  Just had to get that stuff off my chest.

I have left work now.  I am on the Woodstock Road that snakes next to the St. John River.  I am half tempted to pick up Roger and just drive west!  West to where?  I dunno?  Just drive man and we will find the answer on the road.  Eventually, I discard that idea as I pull into his dusty blue gravel driveway.  It's about 5pm with the sun in the western sky slowly sinking behind his red brick ranch style house.

"You look like you could use a drink," Roger opined from behind his smoking barbecue.  He leisurely turns over some chicken legs and reaches for the water spray bottle to shoot down the flames.  Santana's Soul Sacrifice plays on an unseen radio.

I head into the house through the back patio screen door and open the liquor cabinet.  I survey the most eclectic collection of spirits ranging from Swiss absinthe to Croatian plum brandy.  I am not that adventurous, but I do want something different.  I scan in search of something new, strange, unpredictable, unsafe, but from Scotland.  My gaze comes upon:  Craigellachie 13. 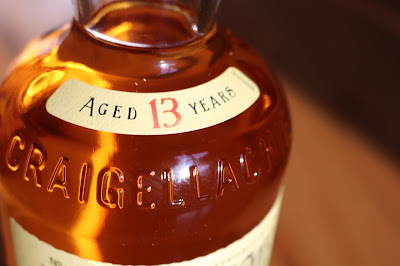 Aged 13 years?  What kind of a single malt is aged 13 years and then released?  In the marketing world 13 is regarded as unlucky, which is why there are so few whiskies with a 13 year age statement or 13th floor elevator buttons in nearly all hotels.

The Craigellachie distillery has been around a long time, like back to 1891 I think, but the reason I had never heard of it is because up until about 2014 the distillery's output was sold almost entirely for blends like Dewar's and even some White Horse.  Alright, maybe an independent bottler or two prior to 2014 managed to pinch some stock and release it, but the bottom line is that there was not a lot of single malt available from this distillery.  That all changed in 2014 with the release of a 13 year old, a 17 year old and some others.

Artificial Color?
Depends on what source you consult.  Some say yes, some say no.  I don't have a definitive answer. 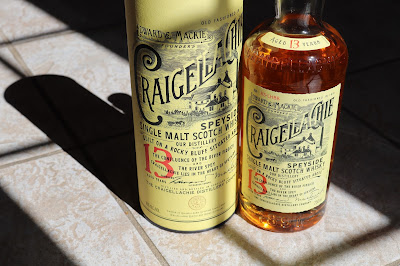 General Impressions
I gotta hand it to Roger.  He always teaches me something new.  I never heard of this single malt.  It's an odd malt in the sense that it is non-chill filtered but I am pretty sure it has artificial color (e150a) added, and at the same time has a great above average ABV of 46%.  Speaking of 46% ABV, it really calls for some water.  I recommend a teaspoon to a double pour.

This is a classic Speysider.  Golden honey with spiced marmalade.

Lynyrd Skynyrd's Freebird is playing now on an old transistor radio.  Maybe it is a sign.