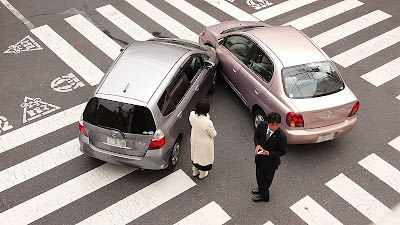 Copyright © Jason Debly, 2009-2011. All rights reserved.   I do not own any rights to the car accident photo.  It was taken by Shuets Udono who has granted permission for its reproduction here.  The video of the Sex Pistols crooning "Pretty Vacant" is posted for the purposes of nostalgia, education and entertainment.
Posted by Jason Debly at 11:48 PM 4 comments:


What is the best selling whiskey in Ireland?  Bushmills?  Jameson's?  Jameson's standard bottling is enormously successful in the United States, so why not in the homeland?  Nope, it's Power's Gold Label.  Never heard of it?  Vaguely familiar from visits to the grocery store?  Yeah, I know you.  You should be getting that package of organic pasta or 12 grain bread, and where do I find you?  Yeah, scopin' out the booze!  Don't pretend you have never seen Power's.  You've seen it.  Maybe you didn't buy it because it was $19.99.  Don't worry, I bought a bottle. Power's is very affordable, no-age-statement, Irish whiskey that is as smooth as Irish charm.  It is probably the best of the no-age-statement standard bottling Irish whiskey.  I'd take it any day of the week over the standard Jameson or Bushmills.  A great starter whiskey for the newbie, and amusing to the old horse too.

Palate
Sweet bread, apples, limes wrapped in an oily texture with a dash of nutmeg.

Finish
Flavors do not linger very long, so the finish is what we would term 'short.'  What we are left with after the whiskey is gone are pleasant notes of classic pure pot still flavor.  Hard to describe it if you are not familiar with Irish whiskey, so lemme try anyway.

Irish whiskey tastes distinctly different from scotch due to the use of a pure pot still.  Power's showcases this classic flavor. 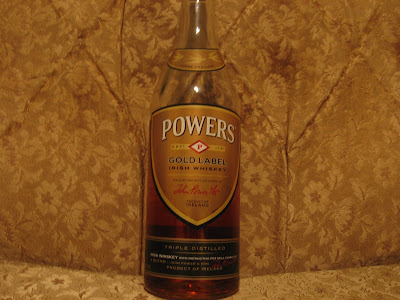 This whiskey is a blend of pot still and grain whiskey, but I am told the ratio of pot still to grain is like 60/40, which in turn is responsible for the unmistakable Irish whiskey taste.  So, what's pure pot still taste like?  That classic Irish taste is of lime and a little green onion.  Done well, it is restrained and pleasing.  Done poorly, it can come off as young, raw and spirity because the flavor of green onion dominates.  Power's do a fairly good job, but on the edge of being a little young.  We can forgive this given the ridiculously cheap price.

General Impressions
Power's Gold is a very good introduction to Irish whiskey.  While the price is low, the quality of the taste is not.  Maybe not super complex, but hey, if you live in the US, you probably only paid $20!  Extremely smooth, with some spice to make it interesting.  Flaws?  None really.  Compared to other no-age-statement Irish whiskies, this is probably the best of the lot.  Definitely better than Jameson's standard bottling.

If you are familiar with scotch whisky, and never tried Irish, this is a good place to start. 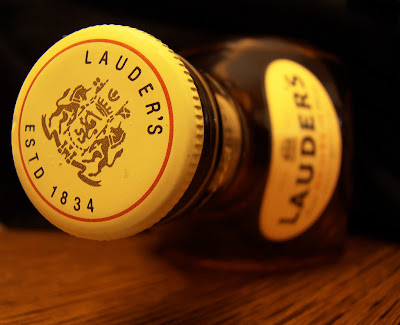 There are puzzles of this world that I will never understand.  Like the fascination with The Grateful Dead, music that I find mind numbingly boring (other than Casey Jones, a pretty darn good ditty).  Another mystery to my mind is: who likes Lauder's Scotch?

Lauder's Scotch is one of those  blended scotch brands that  has always been there, invariably on the bottom shelf of the local liquor store.  You've seen it all your life, since you turned legal drinking age.  You always passed over it.  I mean, who can blame you?  This spirit comes in 1.5 litre bottles for a little under $20.  Can't be good?  I hear you say.  I understand where you are coming from.  I have the same thoughts about Lauder's.

I just got back from the annual family vacation to North Conway, New Hampshire.  After a full day of ferrying the kids to various rides and attractions at Story Land and Santa's Village, followed by marathon play sessions in the hotel pool, they konk out in their little beds.  Their mother turns in soon after, but not I.  Your eternal night owl, whisky blogger and ne'er do-well, haunts the aisles of liquor emporiums.  My gaze settled on Lauder's.  Cheap price, never heard anything about it, could it be good?  Another great value play like Teacher's or Black Bottle?  I just had to find out.

Ok, so the nose on this blend is not pretty.  My judgment is still being suspended because at this price point, there are lots of blends that do not offer much on the nose, but deliver on the palate.  So, here goes . . . 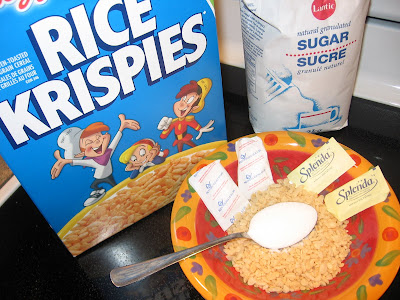 You must know the old adage: A Picture is Worth a Thousand Words?  Take a long look at the picture above.  Drinking Lauder's is to experience the super sweet taste of Rice Crispies with a heaping table spoon of sugar.  That captures the cereal flavor and the sweetness, but I am detecting more.  There is some Dow Chemical action going on.  So, stir in some Splenda and instead of milk, add a can of Sprite or 7-Up and that would be a fairly good representation of the Lauder's flavor profile:  sickeningly sweet and absolutely dreadful.

Finish (undiluted)
Extremely short like a haiku.  In fact, I feel inspired to compose a haiku in honor of tasting Lauder's.  (Please read in halting English with thick Japanese accent for full dramatic affect)

Lauder's is as bad as my haiku. 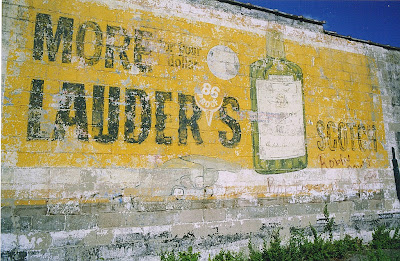 General Impressions
Seriously bad sweet syrup junk scotch that I think is not even good enough for mixed drinks.

Ever read the Surgeon General's warning on the back of a bottle and wonder if it applies to you?  You know, Don't drink if you are pregnant, have a medical condition, like astrology, I dunno whatever?  The Surgeon General's warning needs to be updated to read:  "Don't drink if this is Lauder's!  Immediately drain contents at an approved landfill site capable of handling hazardous substances."

Email ThisBlogThis!Share to TwitterShare to FacebookShare to Pinterest
Labels: Lauders 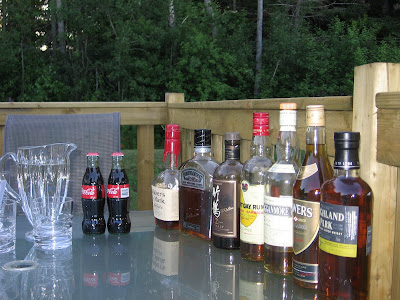 I and the wife invited over a friend of mine and his fair wife for drinks.  She drank Italian soda, while I pushed on her hubby, Mount Gay rum & coke, followed by Power's Gold and finally Highland Park 15 years.  She watched with some consternation as I delivered my praise for Highland Park 15 with reverence that most people only see on Sunday mornings at their place of worship.  In my case, my place of worship is wherever a bottle of HP 15 happens to be. As my sermon proceeded, my friend's wife seemed to grow more worried . . .

"Mike!  We are in the presence of greatness!"

"God has smiled upon our glasses!"

"I declare jihad on bad whisky!"

With that last comment, our respective wives gave stares that cooled us down, in spite of the balmy weather.

Highland Park is a distillery that is incapable of producing a disappointing dram.  HP15 is no exception.  And!  HP15 really is the summer dram of the Highland Park line-up.  It is lighter than the 12 and 18 years old, less popular, but great.  Highland Park can't make a bad scotch.  HP 15 is simply a magnificent single malt.  It screams quality and refinement.  It tastes of the signature 'heather' that is unique to the distillery.  I always marvel at the quality of this dram.  Not for casual drinking as it is quite expensive and simply too elegant for barbecues and ball games.  Save this for very good friends and special occasions!


A detailed tasting note of Highland Park 15yrs, which I wrote last year is available by clicking here.  Too tired to read a lengthy tasting note?  That's ok too.  How about the following one sentence tasting note I have just composed?

"Butterscotch, honey with a nice zing of spice.  Put simply this is a Coffee Crisp bar, enveloped in fine cigar smoke, in your glass!"

The hang time of these flavors is huge!  A finish that goes on forever.  Ok, ok, I tricked you.  This tasting note is more than a sentence.