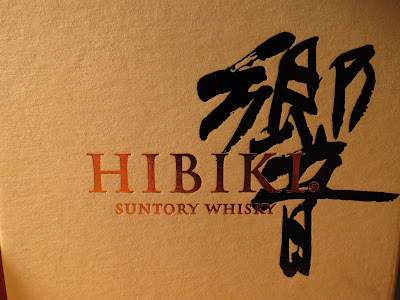 I'm at a downtown bookstore with Keith.  We are sitting opposite each other with our respective purchases.  I clutch Hunter S. Thompson's The Rum Diary, and a steaming black coffee, while Keith balances a direct-from-Japan manga trade paperback on his lap, and enjoys a double espresso.

It's a Saturday night.  The wife kicked me out of the house for the evening because she was holding a Gilmore Girls marathon with a friend.  As water seeks its own level, I rang up Keith.

"I am thinking about posting a review of a Japanese whisky," I say changing the topic abruptly from our mutual vent session directed at the writers of the original Star Trek series for never having an episode where Captain Kirk and crew beam down to a planet where the inhabitants are naked.

"Do me and the world a favor by not telling stupid ass stories."  Keith stared out the window at the howling wind that caused the curbside snowbank to drift into the street.  "Straight review."  He took a sip of his espresso, and added, "That's what people want."

"Boring," I replied.  "Trotting out a little distillery history, regurgitating corporate marketing material and officially sanctioned tasting notes with high resolution stock photos has been done to death."  I enjoyed my Ethiopian java and noticed Keith doing some not so subtle surveillance of a middle-aged lady with a serious affinity for leopard print.  She looked his way.  Caught in her gaze, he was a trembling antelope.

"And stop writing about me.  That is not cool."  He sat up in his chair a bit.  The slouch was gone.  Ms. Leopard had returned to her Cosmopolitan.  "You deleted that post, right?"

"So, what's the deal with the Japanese whisky?"  He rolled back the cuff of his  olive green, '60's vintage US army combat field jacket to glance at his diver's watch.

"Dunno.  I am looking for a hook, an interesting segue into it."

The sky was pitch black with twinkling stars above the soft glow of the street light.  A cloudless, wintry night told me it was getting colder by the minute.  I glanced away from the street to see my friend was no longer in his chair.  The Antelope had left me and was chatting up the Leopard.  I finished my cup of joe knowing full well I had been abandoned in this urban savanna.

"I'm heading out," I muttered as I breezed by Keith.  I glanced at his new found friend's left hand, resting atop a Michael Kors bag, and was relieved not to see any gold band or tag suggesting she was considered an endangered species by someone else.

"Nice seeing you again," he said like we just ran into each other by accident while ordering skinny vanilla bean lattes rather than how it really went down with me picking him up at his mom's place.

I drove back to my house, marched upstairs, out of earshot of the giggling Gilmore Girls revival going on in the basement, and decided to try and write a 'straight review.' 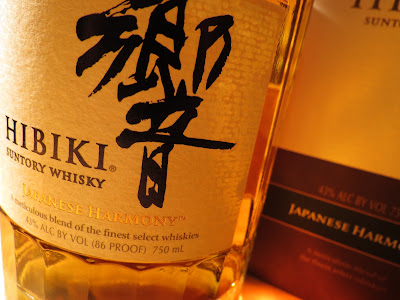 Japanese Whisky
We all know that Scotland has a rich 200 year plus history of distilling whisky.  Japan, not so long.

The Japanese whisky industry started in 1923 with the founding of the first malt distillery, Yamazaki.  Today, the distillery is still in operation and is owned by Suntory.  In 1934, the Scottish trained Yamazaki master distiller, Masataka Taketsuru, bolted from Yamazaki in order to set up his own distillery in Yoichi that eventually became Nikka, another juggernaut of Japanese whisky distilling that has become a rival to Suntory.

Hibiki
I am familiar with the Hibiki brand, having enjoyed the 17 and 21 year olds.  The 17 is among my top three bottles of all time.  A blended whisky that somehow manages to deliver complexity of flavors superior to nearly all single malts I have known.  The 21 is excellent too, but I favor the 17.  What is also amazing about these two offerings is that in a blind taste test I am sure that most people would automatically assume they are sampling a single malt from Speyside.  Hibiki is one of those rare blended whiskies that fools everyone into thinking they are drinking a single malt.

So, it is with pretty lofty expectations that I sampled the latest release under this label: Japanese Harmony.

Composition
60% malt, 40% grain whiskies.  Malt whiskies come from the Yamazaki and Hakushu distilleries while the grain whiskies originate from the Chita distillery.  These three distilleries are owned by Suntory.  In Japan, the owners of distilleries do not sell their whiskies outside their corporate conglomerate.  So, Suntory owns all the whisky distilleries spirits going into their blends, whereas in Scotland, it is common business practice for distilleries to sell stocks unwanted to anyone, even competitors, if the price is right. 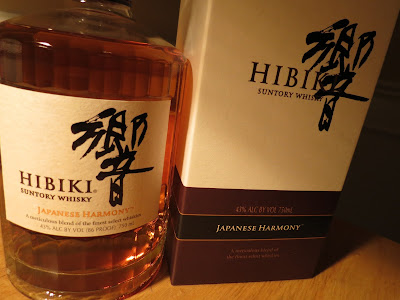 Verdict
In a blind taste test, this could easily be mistaken for a young (e.g. 8-10 yr old) single malt.  There is no graininess or imbalance of flavors that is present with so many blended whiskies.  No bite or offensive alcohol notes here.  Hibiki Japanese Harmony is indeed harmonious.  Initially quite sweet, but it does dry up a bit by the finish, but not by much.  This is a sweet whisky overall.  It works for me.  If you like Dalwhinnie, Glenmorangie Nectar D'Or, Cragganmore 12 and Glenfiddich 15 Solera, then you will find Hibiki Harmony is in your wheelhouse.  Add a little water and you will taste more sherry and smoke.

Criticisms?  Price.  It is very expensive.  $100 in Canada and not cheap in the US I am sure.  For that price, I can buy some 18 year old single malt Scotch whiskies that will exhibit far more complexity.  Matter of fact, all of the aforementioned single malts are substantially cheaper than this Hibiki release.  For that reason, the chief problem with Hibiki Harmony is not the taste, the quality or anything to do with the whisky itself, but rather the price.  No value for money here.  If you buy this whisky, you are treating yourself, which I think is always nice to do from time to time.

Other than the price, I find it is a little light on complexity.  If you want complexity of flavors, you need age.  None of the whiskies making up Japanese Harmony taste young or cheap, but if they were given some more time in the cask, I think we would be rewarded with much more complexity, as is the case with the amazing Hibiki 17 and 21.  And this is a sticking point for me.  For the high price, I expect more complexity.  Compass Box whiskies are no age statement Scotches that exhibit tremendous complexity for a lot less money.  Try out Spice Tree for a prime example.

Japanese Harmony shares a lot of its flavor profile with the 17 year old bottling, but without the complexity.  So, it is fair to say that a lot of the house style of Hibiki is readily apparent in this bottling, and that is a good thing.  Unfortunately for you fans of Hibiki 12 years, I understand that Japanese Harmony is intended as a replacement.  The trend in Scottish producers to move away from age statements also seems to be happening in Japan.

Except for the price, I recommend this blended whisky.  If you are a novice and have the money to buy, I am certain that you will enjoy this fine whisky.  Connoisseurs will delight in Japanese Harmony because it delivers classic Speyside notes with a slight taste of Japanese oak.

P.S.  Interested in more info?  Try my video review of this Japanese whisky: