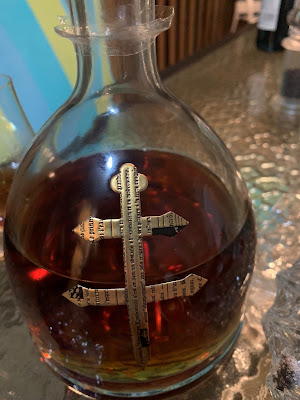 Celebs Selling Snake Oil?
I am always a wee-bit suspicious when a celebrity endorses a brand of drink.
Why?
I am wondering if it's all about the bags of money exchanged for their endorsement.  So many celebs have lately hopped on a spirits money train.  There's Sammy Hagar (tequila), George Clooney (more tequila!), David Beckham (whisky) and even Bob Dylan (more whisky!).  So much for the hippie ethos of Blowin' in the Wind!  Just send some bucks Bob's way and he will be comfortably tangled up in greenbacks.So, as I stare at a bottle of D'Ussé VSOP Cognac, I tell myself, "I am going to suspend judgment," and at the same time try to forget the horror tasting I did of an artificially darkened spirit promoted by Drake that was called 'Virginia Black' that strongly tried to masquerade as being a cognac.  It was a bizarre whisky science project in a bottle.
Jay-Z
I don't know much about the guy other than: he grew up in the NYC projects, sold drugs on street corners, got into rap music, made his fortune in rap music, and then ventured into the business sphere where he has enjoyed considerable, well incredible success, given that he is now a billionaire.  Unlike a lot of celebrities who fritter away their wealth, he has exercised impressive business acumen, with investments in a wide range of industries including spirits.  He is a true rags to riches story that I never tire of.
D'Ussé VSOP cognac was initially launched in 2012.  Jay-Z was an early investor who became a part owner of the brand, and publicly endorsed it in advertising, as well as drinking some of it from his Grammy trophy at the time.  The other owner is Bacardi.  For Bacardi, it was their first foray into the cognac market. 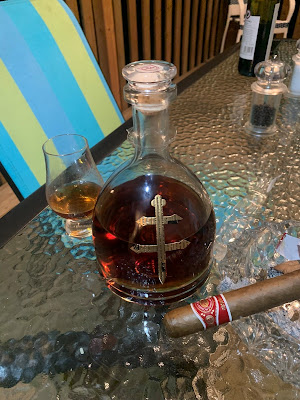 While corporate ownership is relatively new, the actual producer of this cognac knows what they are doing.  The spirit is made at the Château de Cognac (it's a 1,000 year old castle where cognac production dates back to 1820) and the idea for the cognac germinated in the mind of a well-regarded master distiller, Michel Casavecchia.  He wanted a more up-to-date VSOP cognac that was more approachable, and that would also work in cocktails.  He also developed an XO.
After the release of D'Ussé VSOP, the reviews were pretty harsh.  Critics online didn't like it at all.  I must admit I read a few, and steeled myself for my tasting (hoping that at no point would my gag reflex be engaged).

Category
Cognac
Grade
VSOP (Very Superior Old Pale) designates a blend in which the youngest brandy is aged for at least four years in a cask.
ABV
40%
Nose (undiluted)
Strawberry, sweet candied oak, leather, mint and inviting floral tendrils.
Palate (undiluted)
Rich, luscious red licorice, caramel, milk chocolate, while sweet initially, mid-palate it transitions to red wine (merlot) commences a march to a drier clime.
Finish (undiluted)
drying with a little heat, green apple, fresh mint leaves and toffee.
General Impressions
Damn the critics!  This is good!  All their reviews date from about ten years ago, at the time of the market launch, and maybe it wasn't as good then as it has become now?  All I know, is that in 2022, it's balanced, interesting, approachable, and great for the cognac newbie wondering about where to start in this spirits category.  Connoisseurs may find it a little light on the palate, but alas it is not a defect in my opinion.  Not every cognac must be a chewy caramel, chocolate granola bar.
Just my hunch that this cognac has been improved over time.  Spirits brands do evolve sometimes where the owners start sourcing different ingredient parts.  I have seen this in the whisky category a couple of times.  Teacher's Highland Cream had a key sherry cask malt (GlenDronach), but the owners at one point substituted another sherried malt and it impacted the flavor profile.  Same thing happened with the blended Scotch, Black Bottle.  Used to be very peated and Islay in style, but a few years ago they abandoned that style and opted for a more sherried style and the change in flavor was like 180 degrees, and not for the better.  Maybe that happened here with D'Ussé?  Can't say for sure, but might be the case, except the changes were an improvement, maybe even, a dramatic improvement.
So, in light of the above, I guess I will be the lone critic that likes D'Ussé.
I'm gonna cue up Money Ain't A Thang.  Jay-Z got it going on with that track and this cognac!
Cheers,
Jason Debly
Posted by Jason Debly at 4:14 PM No comments: