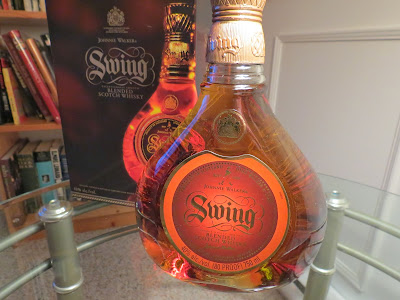 Johnnie Walker Swing is one of the lesser known offerings in the Johnnie Walker brand product line.  This no-age-statement blended Scotch whisky was first launched in 1932.  You would think a blend that has been around that long would be as famous as its sibling: Red Label.

Why?  I suspect it has a lot to do with the fact that it is usually only available through Duty Free shops at airports around the world.  Oddly enough, this particular bottle was picked up for me by a good friend in Orlando at a regular brick and mortar store.    But, that is a rare exception.  Generally, Duty Free is where you will find Johnnie Walker Swing.

Why the name Swing?
If you visit the Johnnie Walker web site, view Ralfy's video review on You Tube, and a number of other websites, you will get basically the same story behind this blended Scotch.

The legend behind this blend is that Sir Alexander Walker (grandson of John Walker), on one of his transatlantic voyages headed to or returning from New York, spent time in the bar and noticed how the bottles would move and shift due to the movement of the ocean liner upon the seas.  The bartender struggled to keep the bottles in racks in an effort to prevent breakage.  Sir Alex got to thinkin' that there has got to be a better away.  So, he thought and thought, and ordered his minions to design a bottle that would not be caused to fall  over in such a nautical setting. 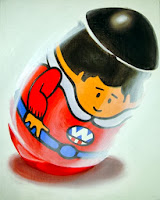 C'mon, you remember.  How does that song go?  Weebles wobble but they don't fall down.

That song basically sums up Sir Al's solution or the one delivered to him by his hardworking staff.

The base of the Swing bottle is convex.  So, it rocks back and forth, if there is any movement of the surface it is resting upon, but nevertheless remains upright, at attention, if you will.  Kinda like me, as I think about doing a whisky and food pairing episode with Nigella Lawson. 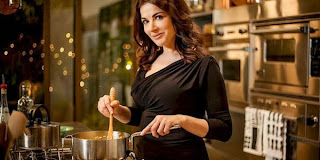 Nose (undiluted)
Invitingly floral with gentle sherry notes, followed by a wisp of smoke.  Malty too.

Finish (undiluted)
Sherry still there.  Some oak comes to the forefront before fading to a final dark red fruit note (due to the sherry influence) . 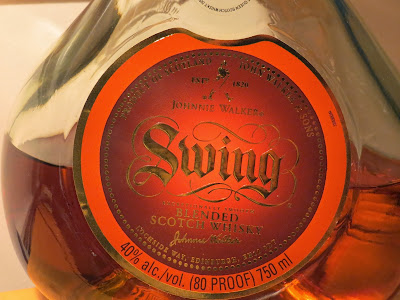 General Impressions
I drink this and I immediately think of Cardhu.  An unexceptional 12 year old single malt, if there ever was one.  Cardhu, by the way, is a core malt of this blend and really dominates on the palate.

Johnnie Walker Swing is sweet, smooth, with some honey and sherry accents.  I taste a bit of old oak, and wonder how great the selection of casks of the single malts making it into this blend were.

The nose was the best part of this blend.

Highly quaffable and not offensive in the least, which leads me to believe that this is targeting a very mainstream, non-connoisseur whisky segment.  Nothing wrong with that, so long as you fall within that market segment.

Value for Money?
I paid $60 for this bottle.  About $20 too much in my opinion.  At this price point there are a lot of great single malts that come to mind that are in the same flavor profile (Speyside honey delight) that do a far better job.  I am thinking Glenmorangie Nectar D'Or, Glenfiddich 15 Solera, and Cragganmore 12.

In terms of blended Scotch whisky comparisons, Johnnie Walker Swing is similar in taste also to Dimple Pinch 15, Chivas Regal 12 and 18.  The 12 is cheaper than the Swing.  Chivas 18 is overpriced, but it probably comes out on top in a heads up competition with Swing.

So, Why Buy This?
I would buy this for the Johnnie Walker fan, a person who likes all things Johnnie.  I know quite a few people of such a disposition.  I think they would be amused by receiving a gift of a Johnnie Walker offering that they are not familiar with.

I would also buy this for someone who likes blends a lot, and does not enjoy the taste of peat, big smoke and other classic Islay flavors.  Swing plays it real safe with the consumer.  Nothing offensive here.  Nothing super interesting either.  We are talking pancakes with maple syrup.  No blueberry Belgian waffles here with English cream. 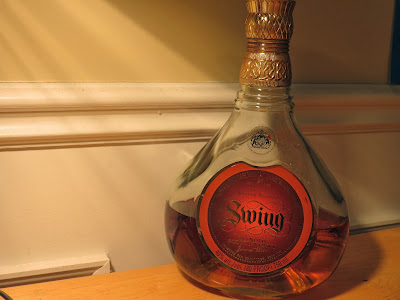 Comparison to Other Johnnie Walker Products
I prefer the discontinued Green Label to Swing.  I prefer Black Label to Swing.  Swing is better than the newly launched Gold Label (no age statement), but not as good by any means as the old Gold Label 18 years (which naturally has been discontinued).  18 year old Platinum beats Swing and so does Blue.  Mind you, those are far more expensive.

Conclusion
Would I buy this again?  No.  Why?  I became bored with it quickly.  I like blends, but this one is a little too simple and mainstream.  It lacks complexity and pizzazz that I expect at $50-$60 price point.  $40 and below makes it far more attractive.  Hell, I think if I took a bottle of Cutty Sark and a bottle of Laphroaig Quarter Cask, I could create a Johnnie Walker Swing with a little zip and pizzazz much to my liking!

Copyright © Jason Debly, 2009-2013. All rights reserved. Any and all use is prohibited without permission.  Photo credits; Photograph of Nigella Lawson widely available on internet.  Photographer is unknown  If you know, drop me a line and I will give credit.  This image appears purely for entertainment and educational purposes.  Well maybe a little titillation too.  All of other photographs taken by yours truly and can be reproduced if you give me credit and link back to this blog.  Cheers!
Posted by Jason Debly at 9:05 PM 18 comments: 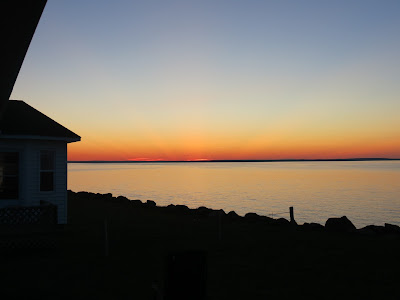 "I am taking the kids to the cottage for the weekend."

I am standing in the kitchen.  Hands in my pockets.  Still listening.

And then she added with a wry smile, "please try to contain your excitement."

You see, two of my kids, ages 5 and 7, were in the habit of hanging on the French door, separating the dining room from the kitchen, by the door knob, and swinging back and forth like shutters in a Kansas tornado.  My other daughter is 15 years old, and far too cool for such nonsense.

Anyway, the door was in need of repair, as it was partially pulled off the hinges.  A carpenter was coming in to replace with a new one that would also have to be painted.  Plus, he was going to nail some flashing that was loose on the roof.  It would be really great if the kids weren't around to interfere with all that, I suggested in a low and hopefully hynotic voice over morning coffee to the wife (she hates being called "the wife").  I let my highly persuasive argument percolate in her mind, employed Jedi knight mind tricks, tried to put her in a superconscious state of mind that Reveen would be proud of, and other mental slight of hand, before gradually giving serious thought to bribery, as I stirred my coffee.

Fortunately, I didn't have to open my wallet (her's is fatter than mine anyway).  By Friday night, she had come around to my way of thinking.  So, while she would spend weekend evenings gazing at a seaside sunset (see above), I had my work cut out for me.  I had to do what I like best.  Organize a whisky tasting, but on very short notice.

I always try to have a theme for a whisky tasting, which is generally determined by what I have on hand or members of the whisky club can bring.   I settled on an Islay theme.  I had Caol Ila 12, Bunnahabhain 12 and whisky dog Ken would bring Laphroaig 18.  But, it takes more than a few good single malts to make a successful whisky tasting.  You need suitable food  or hors d'oeuvre pairings. 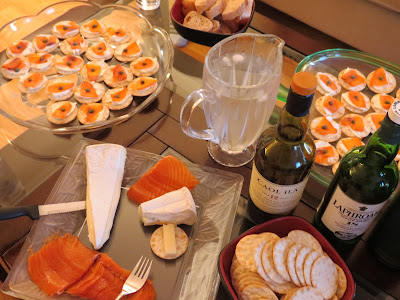 Since the whisky tasting was taking place at 8pm, there was no need for serious food pairings.  What was a prerequisite for a successful evening were light appetizers that compliment the featured whiskies. Crusty French bread  and water might be appreciated by prisoners on Devil's Island, but not by I and the whisky hounds.

So, I have an easy- to-make hors d'oeuvre for you to consider.  Simply take a plain cracker.  I use Carr's Table Water Crackers.  Spread some plain cream cheese on it, place a slice of smoked salmon on top and finish with a single caper, as pictured above.  Take a sip of a nice Islay malt, and then a bite of that properly dressed cracker and you have a nice melding of marine flavors.

What I like about this appetizer is that it does not overpower the taste of the whisky.  It would be a mistake to take a bite of Danish blue cheese, and then knock back some Caol Ila or the even more sublime Bunnahabhain.  The strong cheese taste would overpower the malt and muddy its subtleties. 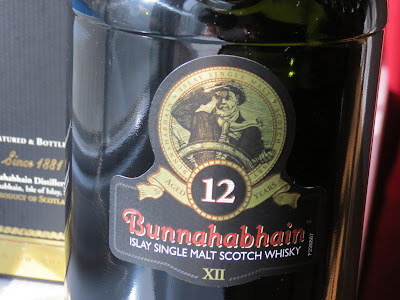 Nose (undiluted)
Light peat, garden fresh mint, piping hot brewed black tea, and a touch of loam.  Sherry lurking in the background.  Sherry?  Yeah, in an Islay malt?  I know.  Bewildering, but more about that later. 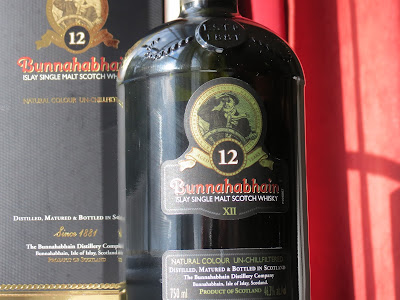 General Impressions
Whisky dog Ken astutely pointed out that in a blind tasting this would not easily be recognized as an Islay malt.  A lot of sherry that melds perfectly with peat and sea salt.  That alone does not suggest the stereotypical Islay that is enormously dominated by notes of phenols, hospital bandages, ointment, iodine and powerful, in-your-face beach bonfire smoke.

Bunnahabhain takes the Islay malt classic and mixes things up with sherry accented by sweet malty action before a peculiar, what I can only describe as flint-like or stone taste, but all in a good way as far as I am concerned.  I think this stone/flint action is probably contributed to by the sherry and oak casks.  I like it because it is really different, but I am sure some readers may find it a bit odd.  Kinda like the humor of Andy Kaufman.  You are a fan of non-linear comedy or you aren't.

High ABV
At 46.3% I was expecting this to pack a serious wallop and be maybe a little too strong.  Not the case at all.  No raw alcohol or unrefined spirit taste to be found.  Bunnahabhain is remarkably smooth with a medium body, not heavy, but not light either.  You could add water if you want, but not necessary.

Not Well Known
Bunnahabhain is not a well known Islay malt.  Probably because it is one of the least peated Islays out there, and I suspect in the past much of the distillery production was for blends, most notably Black Bottle.  Nevertheless, you should seek this malt out and give it a go.  It does taste of the sea and other maritime flavors with the addition of sherry.  If you can get it for around $55-$60 a bottle, you are doing well.

Well, it's Sunday morning now.  I better head to the cottage and take in the Sunday evening sunset with my very significant other, otherwise I will be meditating on a view from the dog house come Monday morning. 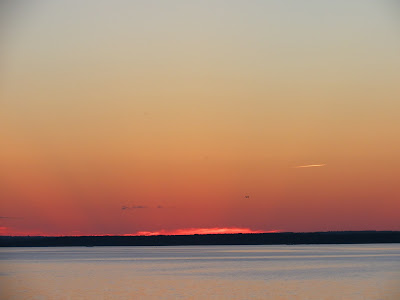 Copyright © Jason Debly, 2009-2013. All rights reserved. Any and all use is prohibited without permission.  Reveen poster image is widely available on the web without attribution as to its creator.  Used in this post  for artistic and literary purposes only.  All other photos taken by yours truly.
Posted by Jason Debly at 10:15 PM 20 comments: