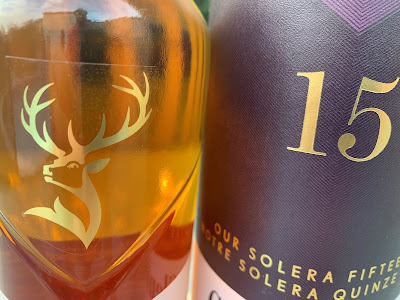 I saw this on the shelf, at my local liquor store, and thought it was time to revisit it.  Fifteen years ago, I was a big fan of this single malt.  It was a nuanced honey, barley, golden cereal type of flavor profile that exhibited impressive complexity.  It was totally in my wheelhouse: a classic Speysider on the lighter honey based flavor map.  Back then, Glenfiddich 15 Solera had a place on my shelf alongside other malts with similar flavor profiles like Cragganmore 12 and Glenmorangie 12 Nectar d'Or.

So, while the security cameras watched my every move in the liquor store, as I hefted the bottle in its tube, I decided to pull the trigger, and approached the cashier.  $99!  Times have changed.  Used to be much cheaper.  But, I thought this is a fifteen year old single malt and given that age statement, $99 in Canada is fair.  My friends south of the Canadian border are probably getting it for $70 or so.  Still fair I think at first glance. 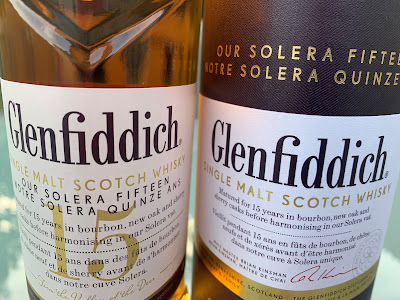 So, I get this bottle home, sit out on the back deck, pull the cork, pour a dram and just let it sit for about 10 minutes or so.  Let it breathe. I do this because sometimes the first dram poured too soon tastes a little tight or hot with some single malts.  Highland Park 18 comes to mind.  Best to open the bottle, have a dram after twenty minutes, and it will taste even more mellow a week from then because of oxidation.

Solera?
While my dram breathes, I think about 'solera' on the label, and what it really means.  'Solera' is a method of aging port and sherry that originated in Portugal and Spain.

Imagine rows of barrels or casks, stacked five or so levels high, all connected by pipes, and sherry drained from the ground level casks is the oldest, and the empty space in the cask is replaced with sherry from the cask of the row above.  Meanwhile, as the oldest sherry is bottled by draining the floor level barrels, more young sherry, is poured into top row barrels.  This is the purported Solera system, but from what I have read, the term is used very loosely meaning the actual aging and blending of spirit may not be adhering to Spanish tradition outlined above.

The solera technique also is purportedly used by some rum producers.  However, I read one rum expert write he had never seen a Solera system employed at any distillery as described above.  So, who knows what the truth is?  Anyhow, you and I now have some understanding of what Glenfiddich wants you to believe.  I suspect the use of the Solera term is more marketing than fact.
Category
Single Malt
Region
Speyside
Age Statement
15 years
ABV
40%
Artificial Color
Yes.
Chill Filtration
Yes.
Availability
Widely distributed.
Price?
For a 15 year old single malt, the price was reasonable.  Most single malts of this age statement are priced 40% or so higher.
Wood Management
Ex-sherry casks, European oak, New American Oak.
Nose (undiluted)
Honey, dandelions. Pleasant.  Speaks of quality.  Light aromas.
Palate (undiluted)
Apple juice, honey, apricots, white grapes, a hint of raspberry.
Finish (undiluted)
Short.  Tastes young on the finish of flabby white grapes.  Hint of bitterness.  Is that ginger?  For a 15 year old single malt there should be some length of flavors.  Faint, stale note of New York City, yellow taxi cab, cigarette smoke hanging in the backseat.
General Impressions
This may say a 15 year old single malt, but the ingredient whiskies are tasting much younger.  Notes of pearl onions . . . ahh not in a good way.
Really disappointing.
15 years ago or so, I really liked this malt, but not now.  Somehow, it tastes young.  Maybe the ingredient whiskies are much closer to 15 years age statement and years ago it was composed of more older whiskies closer to 18 years?  Can't say for sure, but does taste that way.
In a peer review, this used to be on par with Cragganmore 12, but not anymore as Cragganmore continues to outshine this malt.  As for Glenmorangie Nectar d'Or, the age statement has been sadly dropped and it too is now a disappointment.
Not recommended!
Best,
Jason Debly
PS. Here's my YouTube review:
Posted by Jason Debly at 4:28 PM 2 comments: