Beware of Bars
The first time I tried Talisker 10 years single malt scotch was in a fairly posh bar.  You know.  Ground floor of a hotel, adjacent to a fine steak house.  It was dimly lit, dark wood panelling, leather wing-tip chairs, a long bar that was polished to perfection, behind which stood a smartly dressed bartender.

The evening was young and I and two other guys from work were exhausted.  Drained from all day negotiations, the only order of the evening was to talk about anything, so long as it was not work.  For a drink, I ordered Talisker 10.  Never had it before.  Expected a lot and was disappointed.  Just tasted kinda like brine, sea water, pepper and smoke.  I suppose it was malty and not poor to taste.  But not stellar either.  What happened? 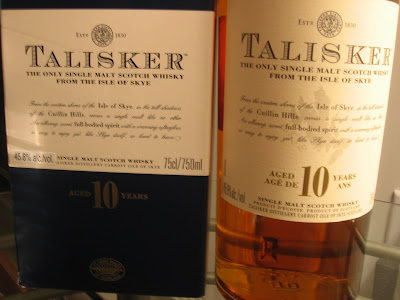 Months and years later, subsequent tastings of Talisker proved far more enjoyable.  This lead me to conclude that the bar probably had the bottle open for a long time.  So, moral of the story: beware of bars.  I have been in bars that purport to specialize in scotch whisky only to find many bottles with an inch of spirit left in them, sitting for a year or more resulting in a considerably diminished flavor profile.  Oxygen is the enemy of whisky.  Once you open that bottle, you're on the clock.  Ideally, you want to finish the bottle within six months.  I find that after the six month point you are pushing it unless the bottle is 3/4 full (in which case you have another 6 months to finish it).

If the bartender reaches for the whisky with two fingers left in it, I will tell him to drop it and get me a new one.

General Impressions
Tired of the Speyside honey/cinammon flavor profile?  If so, try Talisker.  Very unique and at first might throw you for a curve, but you will think about it and come back for more.  A classic if there ever was one.

I have noticed that upon opening the bottle, this scotch is quite peppery, but that quality is tamed by exposure to air.  Taming this lion of a scotch is fine.  He still has his claws, so long as you tame the bottle completely within six months!  Highly recommended to novices and the serious scotch nut.  Reasonable price too.  Often can be found on sale too.

P.S. For another review on this site conducted by a serious Talisker nut, click here.

Email ThisBlogThis!Share to TwitterShare to FacebookShare to Pinterest
Labels: Talisker 10 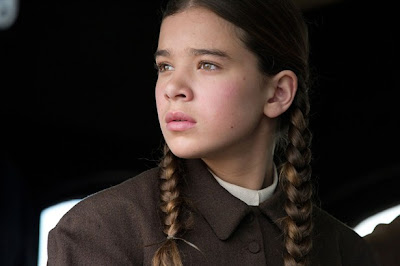 Ever see the 1969 classic western, True Grit?  A trusting man is murdered by his drunk and degenerate gambler, hired hand.  The trusting man's daughter, Mattie Ross, a plucky fourteen year old farm girl, goes to the town of her father's murder seeking justice.  Justice is elusive.  The murderer has fled to lawless territory and the law seems to be ineffectual.  Mattie hires an aging, boozing US marshal, Rooster Cogburn (portrayed by John Wayne) because he has "true grit."  Great movie and brilliantly re-made in 2010 by Joel and Ethan Coen.  Pictured above and below is actress, Hailee Steinfeld, as Mattie Ross in the 2010 remake. 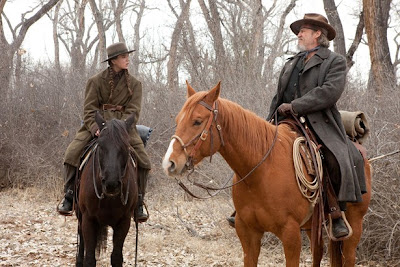 Both films got me thinking about 'true grit' and how elusive it really is in the world we live in.  How many people do you know display such depth of character?  I can name two people in my entire life and one of them has passed away.  It seems today, especially in the workplace, that integrity, justice and fairness are jingoisms touted, but rarely present.

So, what does this have to do with Highland Park 25 year old single malt scotch whisky?  Simple.  In my crazy mind, I think it displays true grit.  How is that for a ridiculous segue into a whisky review? 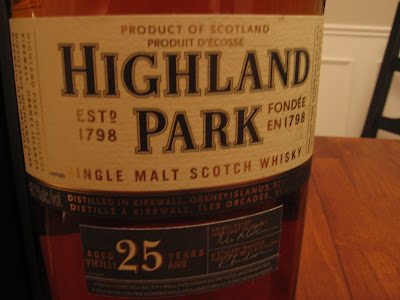 Great single malt has character of a rare quality like great people you may encounter in your lifetime.  Age statements are unimportant.  It is character.  Talisker 10 is a mere 10 years old, but has a depth of character far beyond its years, much like the young Mattie Ross.  Other single malts are very old, and so we assume great character when it may not be there, much like elderly people we know who are frankly not good people.  So, just because Highland Park 25 years is a very aged single malt, we have no guarantees.  We have only the hope that with all that time, it evolved into something worthy of admiration. 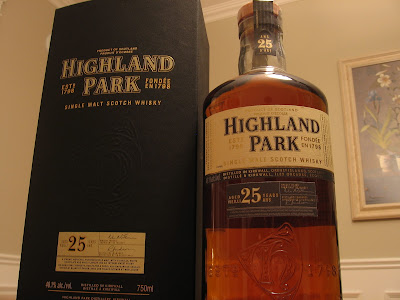 Palate (undiluted)
Explodes upon the palate!  Very intense, concentrated, aromatic flavors of this heavy bodied single malt rain down upon you like the vengeance of God.  Fear and trembling.  This is very powerful.  While a heavy mouthfeel is present, the flavors are, nevertheless, well defined.  You can easily pick out chewy butterscotch, spiced pineapple, dried apricot, fine oak, spicy Cohiba cigar, and marmalade as they fill your palate.  The dominant flavor towards the end is a Florida orange. 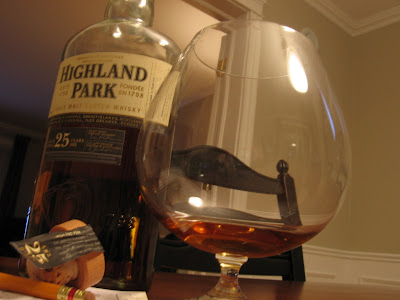 Add Water?
Highly recommended!  Highland Park 25 is 48.1% abv.  It needs water!  It is just too pure, too powerful.  Kinda like trying to look at the sun or the face of God.

How much water?  Pour a double (1.5 oz) and add a teaspoon of distilled water.  Adding this amount of water, however small you may consider it, truly reminds me of what makes scotch magical.  It's ability to change so much with so little.

Nose (diluted)
More peat and sea air is released.  However, the damp leaves are still present and pleasing your nose. 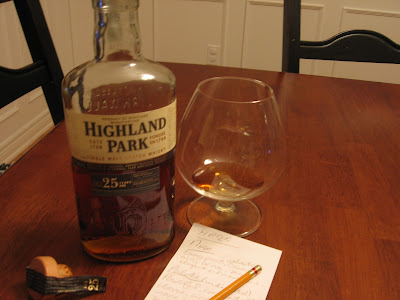 General Impressions
First of all, this is not a whisky for a scotch newbie!  Stay away.  It will turn you off to scotch, and that is something I don't want to happen.

It is so powerful, that upon your first sip, you will begin to uncontrollably salivate.  A huge mistake with this scotch would be committed by taking a big slug.  Take only the tiniest of sips.  I mean really tiny.  There is such kick to this whisky.  Hence, the need for water.  Water is important for another reason.  It brings out more interesting flavors.  I definitely prefer this scotch with a teaspoon of water.  Makes all the difference.

Gift?
Yes, most definitely!  A great gift for someone who knows scotch whisky and therefore can appreciate it.

Price Point
Price varies depending upon where you are.  In any event, it is always expensive, but worth it.  A truly special gift for the scotch connoisseur.  Highly recommended!

Peers
In the 20 plus year single malt category the question will come up as to how this malt ranks against others.  Highland Park 25 ranks very high.  Always popular at scotch tastings.  Is it the best?  Well, now it is a question of whether or not BMW is better than Mercedes.  While I think it is great, I think the Balvenie 21 year old Portwood has a bit more complexity and a flavor profile that I find more nuanced.  In any case, Highland Park 25 beats the hell out of Glenfiddich 21 and a host of others.  In conclusion, it exhibits undeniable "True Grit!" 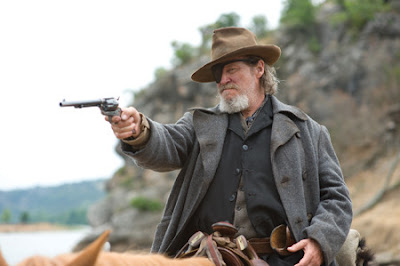 Alternative Opinion
Don't trust me?  Try Chip Dykstra of  The Rum Howler who has agreed to review this single malt and post his astute impressions.


Copyright © Jason Debly, 2009-2011. All rights reserved except for images of True Grit (2010) which are posted for the purposes of nostalgia, entertainment and education.  Those images belong to Paramount Pictures.
Posted by Jason Debly at 1:36 AM 9 comments:


Here's the concept:  After aging a blend of grain and malt whiskies in oak casks, move them to some casks that previously held strong Scottish beer.  Age for three additional months and what do you get?  Answer:  Grant's Ale Cask Reserve.

Beer?  Scotch?  Do they go together like coffee and cigarettes or like oil and water?  You be the judge . . . 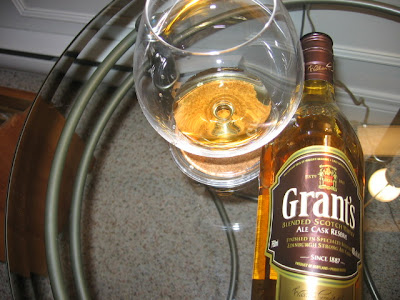 Palate (undiluted)
Starts sweet, cantaloupe, apple juice that was betrayed on the nose comes to fruition on the palate.  Turning malty now and mid-palate there are some definite beer flavors coming into focus.

Finish (undiluted)
Very short hang time dude.  If you're riding that flavor wave, it's gone man in a flash.  What you ever so briefly experience is a taste of cereal, water and then the grainy/restrained alcohol wave chased by a weak puff of a Vantage cigarette you often can smell as you climb into the backseat of a dented, yellow New York cab. 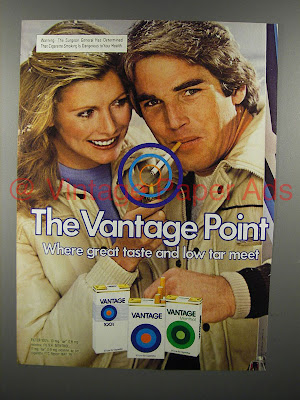 General Impressions
This is very easy drinking.  Hell, it is tremendously easy drinking.  I mean there is nothing stopping you from chugging the whole bottle.  It just goes down so quickly.  In a flash it is gone and I am thinking "where was the flavor?"  So, I take another sip or should I say gulp in my quest for flavor.  Very light bodied, in the style of a Lowland malt.

Price Point
Low price.  I did not pay a lot and frankly I did not get a lot.  I don't feel that I got ripped off, but rather a fair exchange.  I didn't shell out a lot and I did not get a lot in return.  A basic blended scotch on the lightly honeyed, apple cider side.  Simple, no complexity, but hey at the price I paid, I did not expect much. 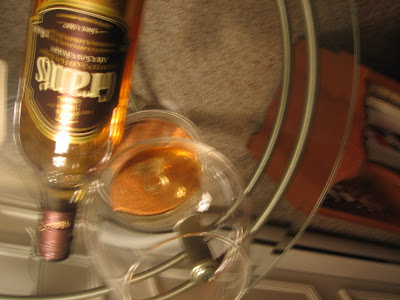 Flaws?
There are two big flaws with this economy blended scotch whisky.  First, it is lacking in flavor.  As I mentioned above, it is so light and thin that you practically gulp the stuff down.  Secondly, it is grainy like the above photo.  Find that photo annoying and disconcerting?  The finish to this blend is much the same.

Targeted Consumer
If I had to guess, this whisky targets the most mainstream of consumers who place a premium on smooth, light flavors and low price point.  This is a good mixer for cocktails or for the guy who likes to load his drink up with lots of ice.

Not a horrible blended scotch.  Just mediocre with considerable graininess on the finish that can at times be bitter.  But, as the adage goes, you get what you pay for.  For me, I prefer a more robust flavor and so, I favor Teacher's Highland Cream, White Horse and for those fans of the more smokey peaty variety, Black Bottle.

Peer Review
It's better than Bell's and Ballantine's, but lags behind Teacher's, White Horse and Black Bottle.

Final Analysis
Would I buy it again?  Ahh no.