Think of your Granddad.  What kind of a man was he?  He was probably a lot like mine.

My Grandfather was James "Jimmy" Mooney and he was a professional boxer from 1940 - 1960.  He was tough and principled (more about the prinicipled part later).  His record was 185 fights, 175 wins (151 KO's), 8 losses, 2 draws.  With a record like that he drew the attention of the American boxing scene.  In the 1940's he moved his family from New Brunswick to Boston and signed with a promoter of some note, Angelo Dundee.

In Boston he fought a number of boxers, but there was one named Beau Jack, that proved to be a turning point for my Grandfather's career.  Jimmy Mooney defeated Jack in a bout that everyone thought would go the other way.  The victory for Jimmy attracted New York promoters who wanted him to go to NYC.  Bigger fights and bigger purses.  One NYC promoter offered him a $12,000 purse for one fight. 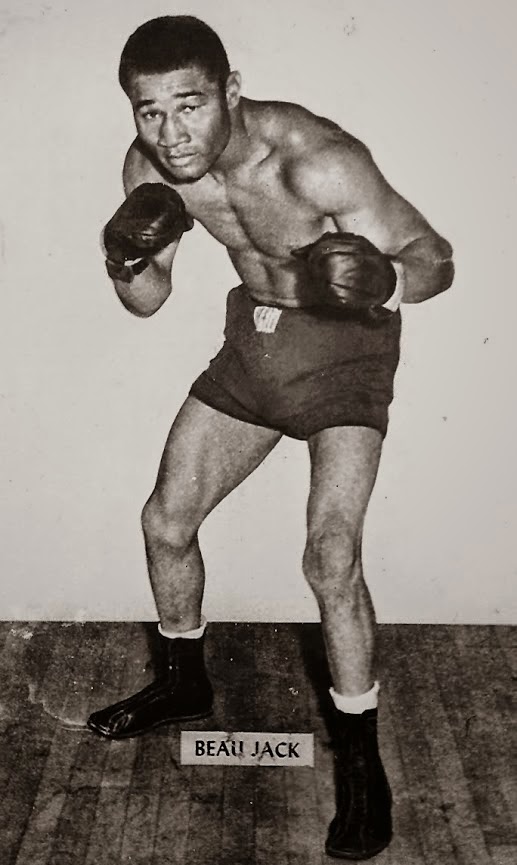 Granddad wanted to go to NYC and make the big money, but his promoter, Dundee, had him under contract.  Dundee would not let him go (probably because it would mean Granddad would sign with another promoter).  Jimmy didn't go to NYC.

I asked my mother why and she said because in those days, "A deal was a deal.  Your Grandfather felt he had signed a contract that prevented him from going to NYC."

"He probably could have broken it and there was little they could have done about it," I replied in typical lawyerly weasel speak.

But, then I imagined how my Grandfather would have reacted to such advice.  He wouldn't say anything.  Just silently dismiss the idea, as he leaned back in his brown leather lazy-boy, and stared out the picture window with his piercing blue eyes.  His silence would speak more than any words could.  I know he would have ignored any such advice from a lawyer.  Matter of fact, he did not consult one.

Needless to say, he and Dundee had a falling out and he moved his family from Boston back to New Brunswick.  His boxing career petered out pretty much after that.  However, Beau Jack would go on to become  a world champion, and headline at Madison Square Garden 21 times, a record that still stands to this day.  Sadly, Beau Jack's post-boxing career life would be one of poverty, and because of such meager circumstances, he decided to lobby hard for a pension scheme for retired boxers.  He was also a principled man. 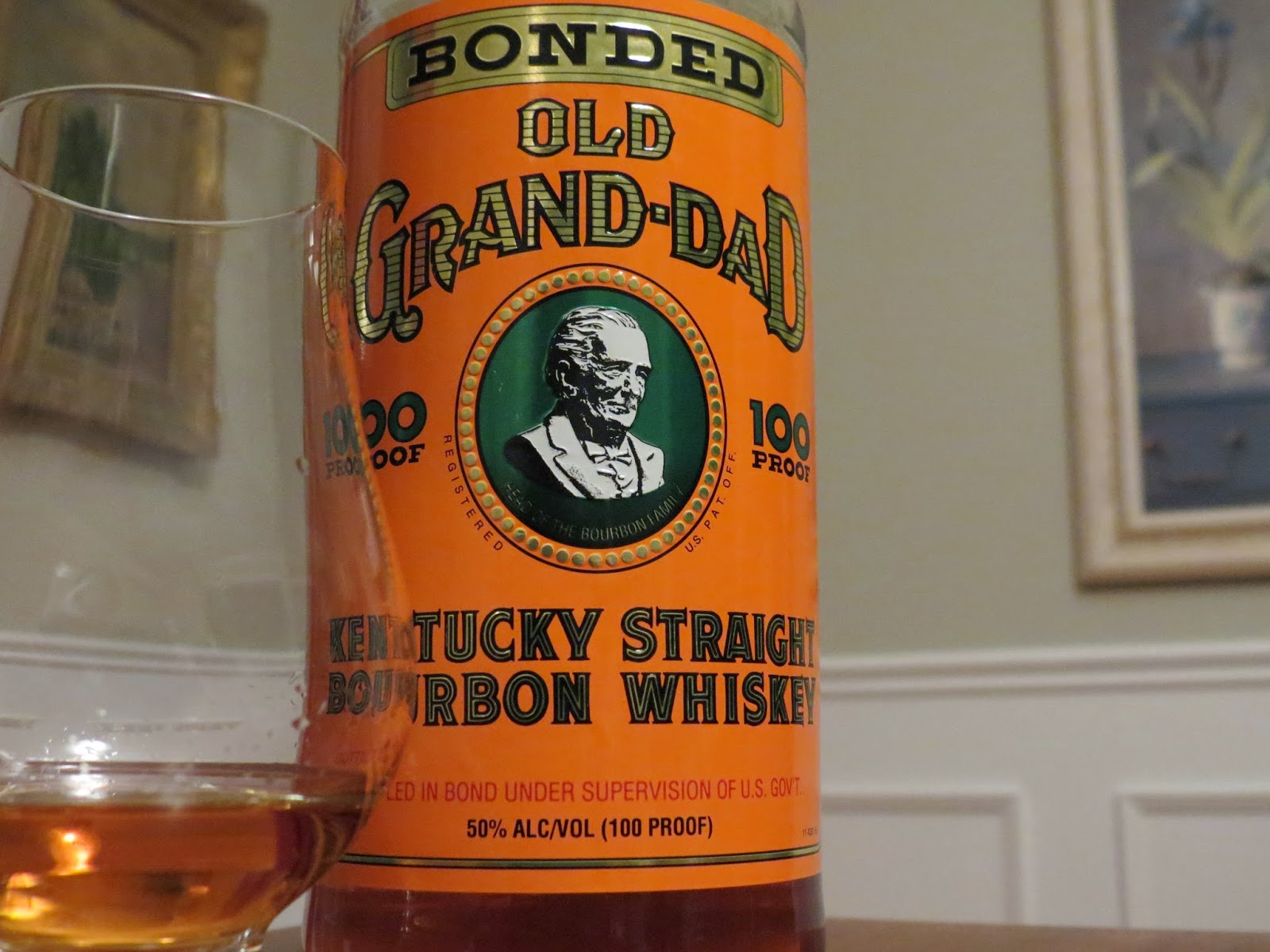 When I drink Old Grand-Dad Kentucky Straight Bourbon whiskey, the above thoughts preoccupy my mind.  Old Grand-Dad is truly old school.  The dominant trend in bourbon, as of late, is to be smooth, gentle, and flavored, but above all, approachable/easy-drinking.  Bourbon is becoming a drink raised by frat boys and used as a base in cocktails for college girls.  Not necessarily a bad thing, but far from where bourbon once started.  If you are at all nostalgic or want a taste of what it once was, I think Old Grand-Dad is a good place to start.

Finish (undiluted)
Drying yet there is an element of limestone water.  Some heat too.  That's the old school burn coming through, but it is somehow pleasant.  The final and lasting flavor is distinctly ginger and slightly acrid.  Medium length.

100 Proof
At 50% alc/vol you can well imagine there is quite a bit of kick to this bourbon, and you would be right.  So, adding a little water is by all means understandable.  In fact encouraged.  Ice is an option too.

Adding water will tame the heat, and make it more palatable to those accustomed to a smoother whisky.  The judicious use of water will bring out vanilla notes.

Ice?  Yeah, I have done it and I do not have hair on my palms.  Do not be embarrassed.  Everyone does it.  Toss a couple of ice cubes in a tumbler with a good measure of Old Grand-Dad and you have a drink that becomes very pleasant as the ice melts. 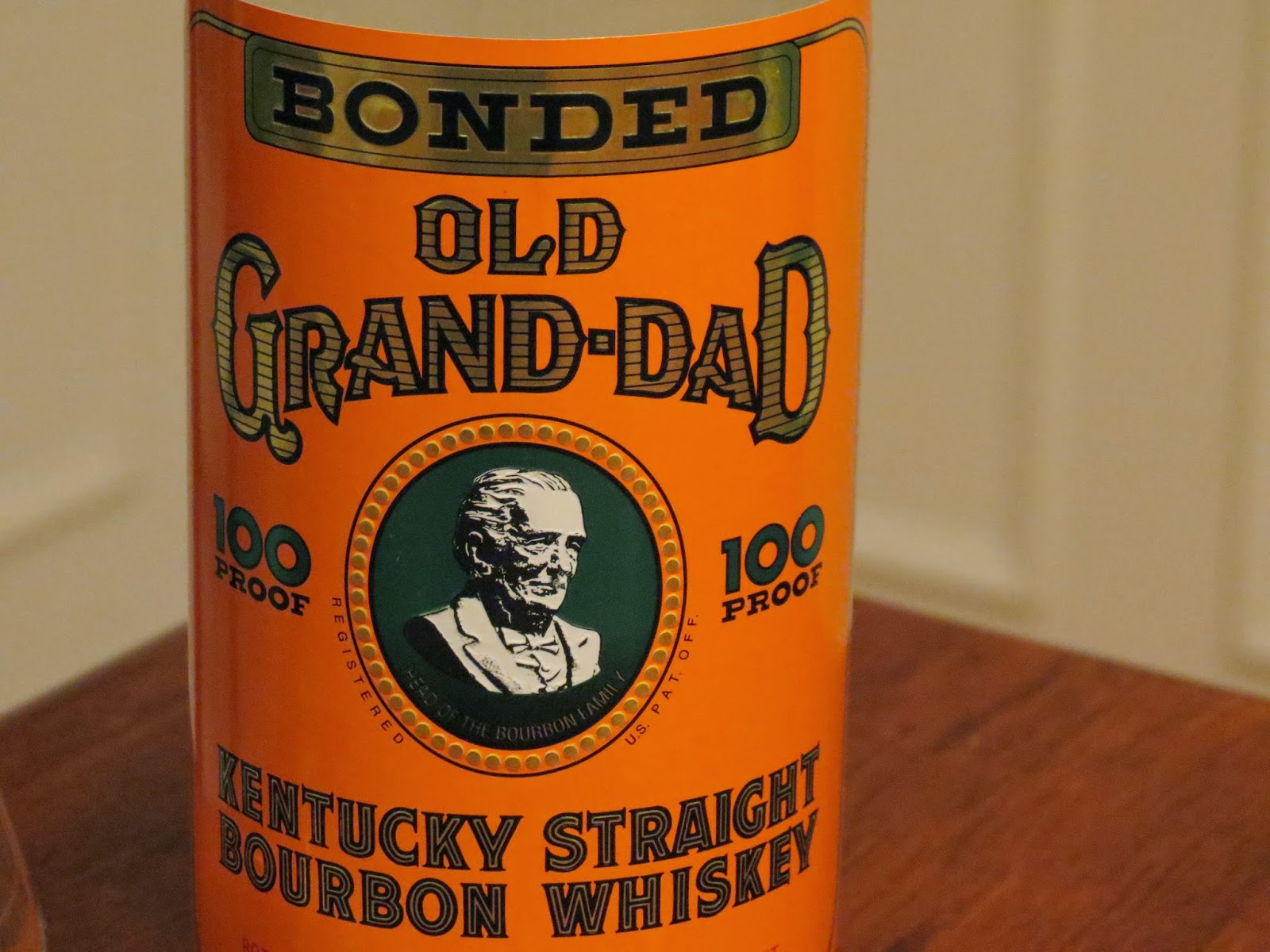 I have had this bottle open for several months and the flavor profile has been completely unaffected by oxidation.  I find that a lot of high ABV whiskeys are more resilient than their lower ABV counterparts, and Old Grand-Dad is no exception.

Price Point
Regular price hovers around $20.  I stole a bottle in New Hampshire for the fire sale price of $14.95!  Value for money here in a very big way!

Criticisms?
The mashbill of this bourbon is reportedly 27% rye.  Most mashbills of bourbon have a rye component of nearly 50% less.  A high-rye mashbill makes for a bourbon that will be spicy.  In the case of this particular bourbon, the high-rye mashbill makes it very gingery on the finish.  I am ok with it, but some readers may find it a bit too much and off-putting.

I think this is not a bourbon for the novice whiskey enthusiast.  They will likely find the flavors and heat are too much, even with the addition of water.  For the whiskey newbie or the enthusiast who prefers a tamer flavor profile, yet experience the old time bourbon style, he or she should consider the standard bottling of Old Grand-Dad.  I reviewed it a year ago and really liked it.  It was not as hot, wild and gingery as the 100 proof version.  Unfortunately, Beam Global has has reduced the standard version's ABV from 43% to 40%, and so my review of a year ago is less of a guide than it could be.  I still hear it is a good drop.  It still, I am sure, has much of the unique character.

For those of you who like Knob Creek, Wild Turkey 101, and other high proof, powerful, robust style bourbons, then I think you will really enjoy Old Grand-Dad 100 proof.

My Recommendation?
Personally, I find Old Grand-Dad 100 proof, served neat, a little too powerful for my liking.  Frankly, it is a guilty pleasure that I enjoy best with ice.  Yes, ice!  I like to toss two good size ice cubes, give it a moment to melt, and then sip.

At $14.95 to $20 a bottle, it is well worth the money.  Is it the greatest of bourbons?  Of course not!  In spite of the great price and worthwhile drink experience, when shopping for even a $20 bottle of bourbon, I will probably gravitate to something a little gentler like the standard bottle version at 40% abv.  This probably reflects my affection for the easy-going, gentle bourbons like Four Roses and Basil Hayden's 8 yrs.  At least that is how I feel as of late.  Of course, when I wrote the Basil Hayden review, I was whining that it did not have enough kick.  Once again, I am a mass of contradictions.

Old Fashion Values?
My Grandfather rarely drank.  Usually at Christmas or other holidays only.  He would have a small tumbler of Black Velvet or other cheap Canadian whisky.  For him, it was a treat, and therefore, he sipped it neat or with a little water, but always sparingly.

Old Grand-Dad is a whisky that I think demands to be treated in the same way.  It is strong drink and insists of you to take the tiniest of sips.  You will be rewarded with an explosion of flavors that are at first spicy, mouthwatering before becoming quite dry on the finish.  I understand that in its infancy, bourbon was such a drink.  Powerful, rough, and not capable of being drunk like soda.  Grampa believed in moderation and Old Grand-Dad demands it from you from the very first sip!