The Glentauchers Distillery was established in 1897 or 1898 depending on which textbook you consult or website you land on.  Being such an old distillery and having an output of around 3 million litres annually, you would expect this distillery would enjoy a bit of brand-name recognition.  Not so.  I had never heard of it either till I laid my eyes on a bottle during a recent visit to my local liquor emporium with fellow whisky dawg, Ken.  Our mission was to buy some obscure bottling for our next whisky club meeting.

Sitting proudly on the shelf was a bottle of Glentauchers, but this whisky was not released by the distillery as an official bottling.  Instead, Gordon & MacPhail had bought up some Glentauchers 'new-make' spirit, poured it into their own casks, maybe let it remain at the distillery warehouse for further aging or moved it to their storage facilities.  I don't know as this independent bottler is not about to give away their tricks of the trade.  Nevertheless, G&M saw potential in the 1994 distillation of Glentauchers single malt and felt with just the right amount of aging in their choice of casks they just might have a winner.  They bottled it in 2014 and out to market it went.

Just another quick note about Glentauchers.  While you are not familiar with the name, you probably have tasted it in the past, well, at least as a component single malt added to blended Scotch whiskies like Ballantine's Finest, Teacher's Highland Cream and Black & White.  The only time the distillery had an official release of the single malt to the public was in 2000 and that was a 15 year old edition. 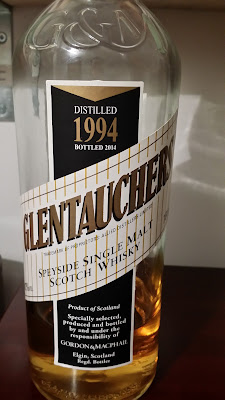 General Impressions
If I had to sum up the taste of this Speyside single malt in a word, it would be: grapefruit.  It tastes like ruby red grapefruit juice.  It is also sweet with some drying sensation on the finish.  The malt is cleansing and light.  A dessert whisky.  If you like Glenkinchie, Balblair, Glenmorangie Nectar D'OR and other sweet light whiskies then this is in your wheelhouse my friend.

Criticisms?  Maybe not overly complex.  The flavors are not simple, but not exhibiting any 'wow' factor.  Nicely balanced and pleasing, it goes down incredibly easy and before you know it, half the bottle is gone.  Trouble is, this goes for $125 a bottle (not $140 as I mistakenly stated in my video review), and at that price point, this is not quaffing whisky.  I would happily pay $75 to $80, but again, north of $100 is just too much.  Damn those prices!  Ah well, it is what it is.

P.S.  As stated above Glentauchers is principally used for blending and functions well in that capacity, but on its own, it does not sparkle.  A blender's malt for sure.
Posted by Jason Debly at 9:20 PM 2 comments: 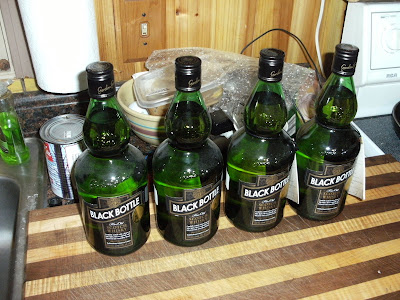