So, I turned up at the pub, the Lunar Rogue Pub, a tiny, noisy, little bar with beat up, dark stained wooden tables and chairs.  Don't get me wrong, I like the place.  They have about 240 different single malts  and blends by the glass to choose from.  Great way to taste at a reasonable price before pulling the trigger and picking up a bottle.  Here are some pictures to give you an idea of the place. 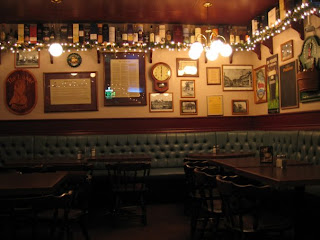 So, as you can see, not a fancy establishment, but that's fine with me.  You've got your mix of college students knocking back glasses of draft, full of excitement and dreams for the future that they anticipate (upon graduation), sitting next to weary, scotch sippin' civil servants and working stiffs like myself who have met the future and realized the dreams, well . . . they are just dreams.  While you sip your beer or scotch depending upon your stage of life, you can take in the framed pictures, beer ads embossed upon sheets of rusted tin, and other wall-mounted knick-knacks, harkening back to another time when jobs were plentiful, a guy had a regular job, but could afford a house and a two week vacation for his family, and his wife didn't have to work.  A time of lime green Ford sedans, white vinyl car seats and Peter Frampton blaring on the radio, in the hot summer heat. 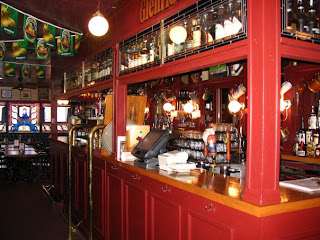 In any event, it was a rainy Tuesday night, a week ago,  when I arrived for this scotch tasting.  George was already there, no surprise, chatting with the owner, Frank.  Frank is a guy that stands about six feet tall, of considerable girth, and his knowledge of scotch is commensurate with his size.  I sit down and note there are only about ten other people in an event which hoped to have about thirty.  Clearly, a failure of attendance, which fortunately has no bearing on the tasting.  Bread and water was provided to restore one's palate in between samples. 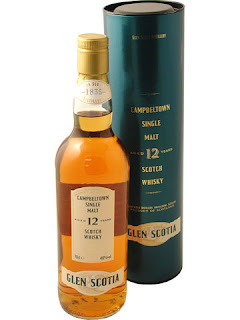 This Glen Scotia single malt we sampled was not impressive.  The nose was weak and seemed off.  The taste was not much better.  A medium bodied, oily malt that was creamy but little else.  Glen Scotia has been inconsistent in terms of quality and this was no stunner.  The distillery is located in Campbeltown, Scotland, which at one time had among the most distilleries.  What happened?  Greed.  Initially, Campbeltown single malts were used for blending and enjoyed great sales, but gradually, blenders preferred Speyside single malts and so sales started to dip for Campbeltown distillers.  Prohibition created bigger problems too.  Campbeltown distillers solution was to cut costs, age their scotch shorter periods of time and sell it in higher volume.  The result was a very poor product.  Harsh, strong, oily spirit that caused Americans (a major export market) to associate anything with the name "Campbeltown" with poor quality.  Campbeltown went from a place with the most distillers in Scotland to nearly the least.  Glen Scotia is one of the few remaining.  What I tasted was not harsh, but weak and instantly forgettable. 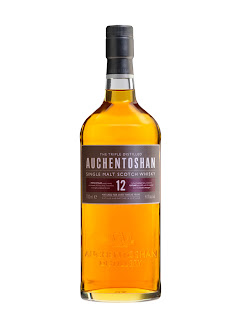 I had  heard and read mixed reviews of Auchentoshan.  The serious whisky critics griped that the Auchentoshan distillery produced weak, plain white bread whisky having little to no complexity or substance of flavor.  I have a friend, James, who had purchased this bottle in the past and disliked it intensely.  So, I was not expecting much.  I was delightfully surprised.  The aromas were pleasing but that other than that I can't remember much else.  As for the taste, it was soft, mellow and malty with some lemon and sweet melon.  The finish was a little smokey and there was no peat to speak of.  This is a Lowland malt and probably a very good representation of that region.  There was marshallow, wagon wheel treat with lots of malty flavor that I really appreciated, as did others.  The price for a bottle is also very reasonable.  I am adding this one to my list of single malts to purchase in order to do a proper tasting note.

The Dalmore 12 year old single malt scotch enjoys a good reputation and strong following among scotch fans.  Unlike Auchentoshan, everything I have heard or read has been positive in regards to The Dalmore.

Lots of vanilla on the nose.  It had more weight in the mouth, which made it a logical next step in the tasting event.  Texture was sweet, smooth but drying too.  Taste was sweet fruits, vanilla and some oak, but a tad bitter towards the finish.  I recall there was a good clarity of the flavors.  What I mean it was not rounded as you typically note in a blended scotch whisky.  Actually, The Dalmore is the core single malt of a great economy blended scotch, Whyte & Mackay.  This blended scotch, has rounded, sweet flavors of gentle fruits like melon and peaches.

So, what was the overall impression of The Dalmore?  I found it a little bit of a let-down.  That bitterness I mentioned earlier really stuck with me and couldn't ignored.  However, in all fairness to this single malt, I need to acquire a bottle and taste it under more controlled circumstances, without a palate that had just sampled two previous single malts.  So, the jury is still out, but so far in this tasting, the Auchentoshan is the clear winner.

This is very popular in the United States and has steady, dependable sales in Canada.  A lot of people enjoy this single malt.  In fact, it is one of the 'mainstream' malts.  I am not a huge fan.  It's not bad.  There are no flaws, but not much that fascinates me.  For me, this is of course, an over-the-top sherried dram with some orange peel, oak and some smoke.  One dram is fine but it is not one that rings my bell.  Let's move on. 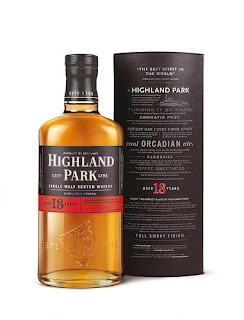 We are nearing the end of the scotch tasting.  The second to last single malt is the illustrious Highland Park 18 year old, a wondrous single malt that I always read and hear good things about, not that I need anyone's opinion on this one.  I have studied the magic of this one.  A honey, heather infused explosion upon the palate provides multi-layered flavors to ponder.  One of the longest, smokiest finishes available anywhere.  A previous, more detailed review is available on this blog in the archives (August 2009) or just use the search function in the top left hand corner. 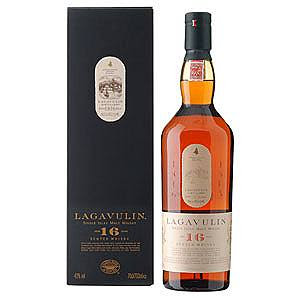 The final single malt of the evening served up by Frank was Lagavulin 16 year old.  An Islay single malt that needs no introduction.  I have reviewed this malt in detail elswhere on this blog, like the Highland Park, and again would refer you to it.

At the tasting, I enjoyed the sweet peat and smoke as only Islay can do it.  It was wonderful as always.  For the others present, it was new to them and they were unsure what to make of it.  No one disliked it, but rather were quite fascinated by the peaty architecture of this spirit.
. . .
The favorite of all who attended that evening was the Highland Park.  For me, the big surprise was the Auchentoshan 12.  A very reasonably priced, Lowland single malt which is often over looked or dismissed by critics as a light-weight region because of its more subtle flavors, lacking soaring peat, smoke and pepper that seem to be key to so many highly rated scotches.  There is something to be said for subtlety.  I encourage you to give it a try!
. . .
Whyte & Mackay Special 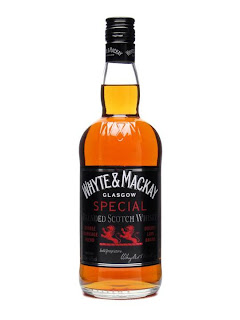 After the tasting was officially over,  Frank treated George and I to two 50 ml of Whyte & Mackay 'Special' blended scotch whisky.  This is a great economy blend, as I mentioned previously.  Very smooth, rounded flavors, no bite (a prerequisite of most blend fans), packaged in honey, ripe red grapes, sherry and a little hint of smoke.  The finish is short, so short, that it commands another sip!  Dangerous stuff!  I like it a lot.  So, if you are ever looking for a change in a blended scotch whisky, please give consideration to this standard bottling of Whyte & Mackay.