Don't Judge A Whisky by its First Taste! 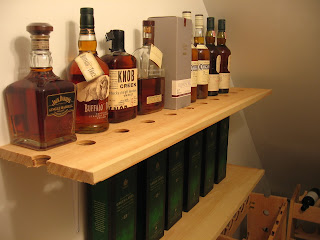 Just as you should not judge a book by its cover, neither should you judge a scotch or whisky by a single tasting of a freshly opened bottle.  I have found that when you first open a new bottle the initial dram may taste a little hot, tart and a little sharp.  The flavors will meld and sometimes improve after the bottle has been left for a week or two.  The reason why?

Air
Air.  Once that seal is broken on that bottle and the cork is pulled air will get in and affect the flavors offered up.  Certainly, some whiskies change very little from the first opening to the last drop, but there are many that do change.  Some improve and some decline.  Recently, I acquired a bottle of Woodford Reserve.  The first week of my sampling it was met by a lot of burn and raw alcohol on the finish.  Give it two weeks and the air in the bottle has tamed it considerably.  It's still a little wild and I stand by my review, but that awful burn has subsided considerably.

Highland Park 18 is another example.  Upon first opening, it seemed perfect to my tastes.  Flavors were very well defined.  Come back to it a week later and the sherry flavors had become a lot bigger, in fact a little unwieldly.  I prefered it upon first opening.

Food
Ever notice how you pull that bottle out one night and it tastes fantastic, but when you reach for it on another, it is not the same?  It could have a lot to do with what you ate for dinner.  Did you scarf up your tongue with spicy Thai food?  Couple of tacos?  Wings with suicide sauce?  Guess what?  Your palate may be in less than optimal sensory function for the task of tasting the multi-stellar splendor of flavors that only whisky can deliver.  Same goes for that Cohiba cigar you just had to have after dinner.  Or maybe it was her mint jelly lipstick . . . ok, ok you get the picture.

Here's a suggestion.  If you intend to drink a fine single malt or merely your favorite good ol' stand-by,  have a bland supper and wait three or four hours before having a drink.  Give that palate of yours time to recuperate.  Nothing other than water should pass your lips between dins and drinking time.  And of course it goes without saying that you should not eat anything with your scotch/whisky.  If you think some dark chocolate would be a nice compliment to your scotch, make your selection an affordable blended scotch (ie. Johnnie Walker Black, etc.).  Chocolate and a host of other appetizers will only serve to marr your ability to taste.  Just say 'no.'  I know this is all the rage at whisky tastings in hotels where fellow whisky nuts walk around in tuxes or kilts that should only be worn at a Scottish Highland dancing competition, but trust me, it's a mistake if you are really trying to formulate an opinion on a given dram.

Water
In between sips of your chosen malt or whisky, drink water and plenty of it.  Drink water at room temperature.  Ice water chills the palate and desensitizes the palate.  Not something we want.

Glassware
Now my opinion here is totally irrational but I find that whisky of any kind simply tastes better from fine crystal.  Whether it be a tumbler, a brandy snifter or the Glen Cairn glass, so long as it is crystal, you'll be all right.  Sample your whisky from cheap old regular drinking glasses and I think there is a difference.  I offer no rational basis for this opinion, just experience.  Try it out.