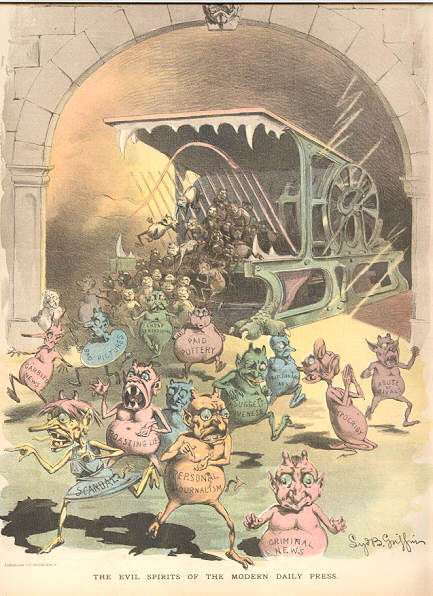 What is "yellow journalism?"  Turn to Wikipedia for a definition and you will read:

Yellow journalism or the yellow press is a type of journalism that presents little or no legitimate well-researched news and instead uses eye-catching headlines to sell more newspapers.

I read the following eye-catching headline on the Washington Post site:

"Canadian whisky: It's called 'brown vodka' for a reason"

Canadian Whisky is brown vodka?  When I saw that headline, I thought, I must read on.  The author of such a provocative headline is a "Mr. Jason Wilson."  Is his article well-researched?  Well reasonsed?  In the fourth and fifth paragraphs of Wilson's article are the following comments:

I think Jason Wilson's sample of Canadian whiskies is flawed and of course leads to the inaccurate conclusion.  If I only sample the most mediocre of bourbons like Old Crow and other nasty American whiskies like say Sunnybrook Kentucky Whiskey, it would be quite easy to make the erroneous conclusion that American whisky is revolting.

With the exception of the standard bottling of Crown Royal, Wilson's whisky sample failed to include middle of the road and great Canadian whiskies like:  Forty Creek Barrel Select, Gibson's Finest Rare 18 years,  Crown Royal XR, Crown Royal Cask No. 16, Glen Breton, Wiser's Small  Batch, Wiser's Very Old 18 years and Wiser's Red Letter.  If he did, he would not have equated the whiskies with brown vodka.

A paragraph later Wilson contradicts himself and admits there are great Canadian whiskies.

"Okay, maybe I'm being too hard on Crown Royal. If I ran out of every bourbon, Scotch and Irish whiskey in my cabinet, I'd be willing to drink standard Crown Royal, which still feels a little pricey at $25. Crown Royal Black, at around $40, is admirable but also pricey for what you get. Even better, I tasted the special Crown Royal Cask No. 16, aged in cognac barrels.  It's an excellent whisky."

In the very next paragraph, he writes that the old standards like Seagram's VO are, nevertheless, "brown vodka."

"As for the other old standards, including my mom's VO, they tasted thin, dull and out of balance, and with a nose that's too marshmallow-sweet. These whiskies clearly are going for the adjective "smooth" at the expense of everything else: complexity, flavor, richness. They showed why Canadian whisky is referred to as "brown vodka," which I might add is somewhat insulting to vodka."  (emphasis added)

So, on the one hand he is saying bottom shelf Canadian whisky is pretty bad, but the high end stuff is great.  Well, that is not a revelation.  Isn't that pretty much a true statement of any merchandise?  I can buy a subcompact Toyota or a Mercedes S class, which one do you think has the superior ride?

Jason Wilson has little credibility as a writer of spirits in my eyes.  Consider what sparked his interest in Canadian whiskies.  He writes in the 11th paragraph of his article:

"I revisited the category because I attended an interesting panel called "The Many Faces of Canadian Whisky" at the Tales of the Cocktail conference in New Orleans a few weeks ago. It was sponsored by Buffalo Trace Distillery, which makes some of the finest American whiskeys, including bourbons such as Eagle Rare, Pappy Van Winkle and Blanton's." (emphasis added)

He revisited the Canadian whisky category because he attended a seminar on Canadian whisky that was sponsored by the American bourbon distillery Buffalo Trace Distillery!  A distiller of American whiskey!  Mr. Wilson you really should check your sources before you rely upon them!  Ever heard of bias or lack of objectivity?  Are you new to journalism?

In light of the above, I respectfully submit that Jason Wilson's article fits the definition of yellow journalism:

". . . a type of journalism that presents little or no legitimate well-researched news and instead uses eye-catching headlines to sell more newspapers."