I like old films.  Especially flicks from the late 60's and early 70's.  One of the gems I watched the other night was The Dirty Dozen (1967).  Two bottles of Johnnie Walker Black Label make an appearance during a conversation between Lee Marvin's character and an army psychologist.  The bottle shape looks slightly different than the ones appearing on shelves of your local liquor stores today.  The bottle is more rounded, but the slanted black label is unmistakable.  Besides noting Marvin's good choice in blended scotch, it got me interested in his career and thinking about what kind of a guy he was.
﻿
﻿﻿


In The Dirty Dozen, Lee Marvin portrayed an American army 'Major Reisman' who was tasked with taking twelve military convicts, awaiting execution or doing hard labor, and whip them into shape, such that they can invade a Nazi military retreat and kill as many Nazi officers as possible.  Sound crazy?  Not well thought out?  Well, maybe you have not worked in government . . .  If ever there was a place capable of spawning crazy ideas. . .   Anyway, that is a topic for another post. 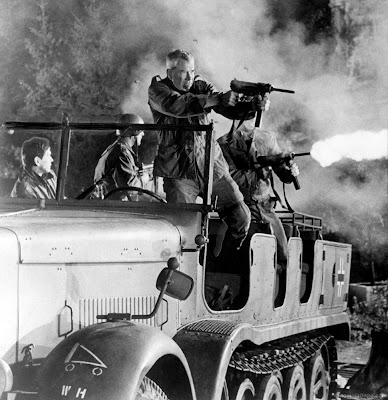 The Dirty Dozen is a great military adventure film.  A lot of the success of the film rests on the shoulders of Marvin.  He is very convincing as a jaded career soldier.  A guy who has disdain and contempt for the inefficiencies of the military brass, its purported authority and the absurdity of war.  He also comes off as very tough.  And I don't think it was much of a stretch for him.  He was in the United States Marines and served as a Scout Sniper.  He saw action too.  He killed people (something he was not proud of), wounded by machine gun fire and saw most of his platoon die at one point.  He was conflicted over violence in film, judging by this quote:

All I can say is that, in Europe, American pictures are the most popular, which amazes me. They do love the violent pictures. And, of course, they have seen violence. So maybe an acting-out on the screen alleviates the pressure on them. I know when I was a kid and would see John Wayne punch some guy and knock him through the wall, I'd say, 'Boy, I'm glad I wasn't that guy.' Or I didn't wan't to be involved in that relationship. So maybe there is good value to it. Now in acting, when craziness is shown in a sick manner or, in other words, 'to no value', I look down on it. Because real violence is a thing that must not be tolerated, and in order not to tolerate it you must be educated in knowing what it is. Violent films come out with value ... When I play these roles of vicious men I do things you shouldn't do and I make you see that you shouldn't do them. I played a lot of what I hate, now I like to play parts which I love. I can play bigots, etc, parts no one else will. I am not fascinated by death any more: there is lots of anti-violence in my heart, and after committing murder it was hard to find peace. Acting is a search for communication - that is what I am trying to do, get my message across. Marines are all volunteers: when it gets rough, you say to yourself, 'Well, you asked for it.' 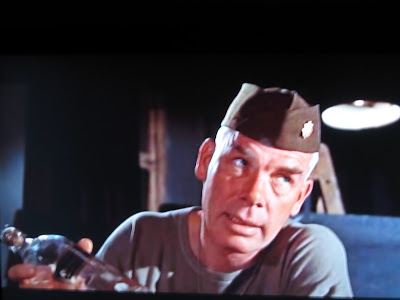 Think about pretty boys like Brad Pitt, Tom Cruise and Matt Damon.  Those guys are just posers.  Marvin was the real deal.

He was also 'tough' in terms of character.  He supported John F. Kennedy's 1960 presidential campaign, opposed the Vietnam war, and was a supporter of gay rights as far back as 1969.  He did all this while being one of the most successful mainstream film celebrities of his time.  Would have been a lot easier to remain silent or very 'diplomatic' on positions that were outside the mainstream, white picket-fence realm of respectability.  A guy who marched to the beat of his own drum. 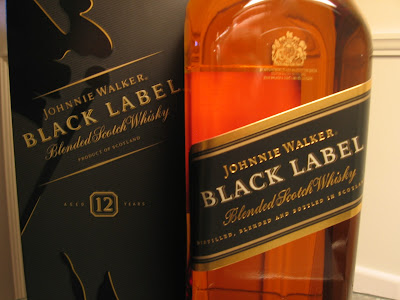 Just a thought or two to consider as you sip Johnnie Walker Black, Teacher's or whatever you have at hand.  Maybe watch The Dirty Dozen too and see a former marine convincingly portray a major?  I recommend it!


Copyright © Jason Debly, 2009-2011. All rights reserved.  Poster owns no copyright to images of the film, The Dirty Dozen (1967), which is posted for the purposes of nostalgia, education and entertainment.  Copyright of images belongs to MGM or successor corporate entity.  Copyright to picture of Johnnie Walker Black held by poster.
Posted by Jason Debly at 1:53 AM