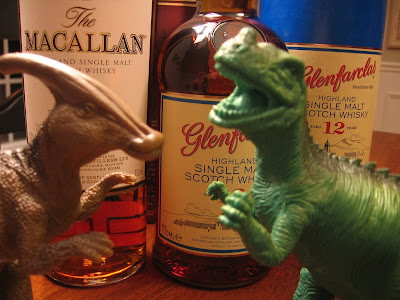 These adversaries inhabit the Speyside region of Scotland and are sworn enemies on liquor store shelves everywhere.  They compete for territory in the 12 year old single malt sherried scotch marketplace jungle. 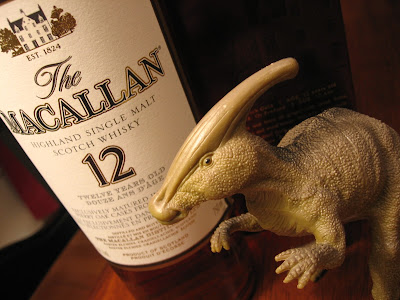 The Macallan 12 years Highland Single Malt
Introducing first:  making his way from the north side of the river Spey in Speyside, weighing in at 40% abv, fighting out of the sherried oak casks of Jerez, Spain corner, a legend of sherried single malt, third best selling single malt after Glenfiddich and Glenlivet, the one and only: The Suave & Sophisticated!  The Macallan 12 years! 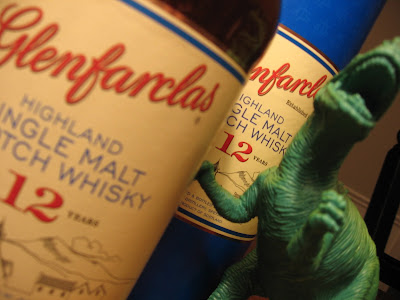 Glenfarclas 12 years Highland Single Malt
Introducing the challenger to the sherried single malt 12 year old title belt:    Hailing from just south of the river Spey, weighing in at a robust 43% abv, this is no herbivore of a dinosaur, but a carnivore, looking to draw first blood from his no-caramel-added opponent!  The dangerous and unpredictable!  The Barbarian!  Glenfarclas 12 years!

Announcer:  Ok boys!  I wanna clean fight.  No caramel added and see what you can do to avoid being chill-filtered.
. . .

Announcer (con't):  The Macallan makes his move first stealthily with incredible finesse suggestive of the highest training in Aikido.  Lift your Glencairn glass of Macallan 12 to your nose and enjoy:  Cherry blossoms, crushed strawberries ready for making jam, vanilla and roses, which are caught up in a lungful of North Sea air.  Languid, sublime nose, simply fantastic!

With this terrific effort of aromas, it comes as no surprise the Macallan 12 lands a perfectly executed roundhouse kick to the snout of the Glenfarclas.

The Barbarian Glenfarclas stumbles from this unexpected assault upon his olfactory abilities.  He's bleeding heavily from the snout, as he attempts to retort:  Lifting the Glencairn glass of Glenfarclas 12 you will sniff concentrated sherry, port (even though port plays no part in production), big Cabernet Sauvignon notes too!  A little whiff of something untamed though, not raw alcohol, but something out of place, maybe like damp wood smoke, but eventually you get some hot cherry pie.  Not the best nose of a 12 year old malt, not terrible, just ok.  The Barbarian Glenfarclas' punch fails to land on the Suave and Sophisticated Macallan. 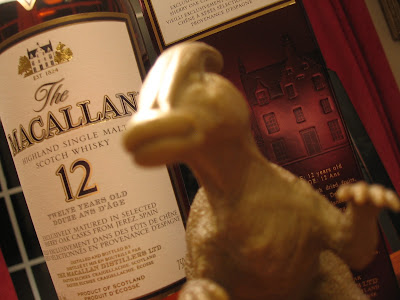 Palate (Macallan/undiluted)
The Macallan easily ducks his unrefined adversary's out-of-control lunge at his nose, and now aims for a deft combination punch to the jaw:   a nanosecond of ripe watermelon and then quickly moving into black grapes, before the flavor profile goes deeper into blackberries and plum.  French Pinot Noir notes, wine of the earth, red earth.  Subtle sherried dram with the elegance of an Audi meandering along the coastal highway of west coast wine country.  Should we stop in Carmel?  I dunno Becky?  Is it a little kinda been done to death?

Palate (Glenfarclas/undiluted)
The Barbarian laughs off this girlie man subtle attack upon his palate, and with his long reach slams the delicate jaw line of Macallan with a webbed and scaly fist of:  far more concentrated and robust sherry flavors; and then follows that up with a lightning uppercut to the palate with semi-sweet chocolate with delightful bitter moments.  The Macallan is stumbling . . . but the Barbarian is not done, as he unleashes a fury of combination punches delivering passion fruits, pomegranate, raspberries, dragonfruit, loganberry and then towering sherry in all its multifaceted ruby splendour. . . but the Barbarian goes too far.  The bell has rung ending the round, but he continues to strike his opponent.  He has gone too far leaving a slightly raw or bitter taste in the mouths of the judges. 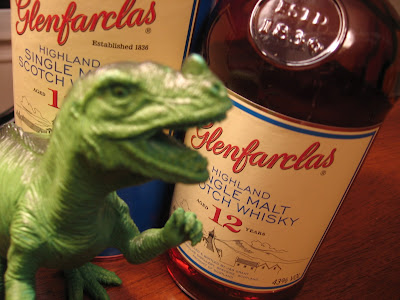 Finish (Macallan/undiluted)
The Macallan 12 is wobbly as the end of the round nears.  He's unsteady as he vainly tries to launch a final assault of: rich, luxuriant Merlot like wine finish, with very faint smoke accompanied by orange chocolate.  Repeated sips delivers more smoke on the finish.

Finish (Glenfarclas/undiluted)
The Barbarian Glenfarclas attempts move in for the kill:  "Macallan you fool!" (pronounced with Mr. T's voice) unleashing a finish of: dusted sherry, old port and the powder dry tannins of Pio Cesare Ornato Barolo,  the red wine of kings and the king of wines, but what is happening now?  Camphor and French Roast coffee bean?  It's out of place, that last minute head fake was a mistake because the Macallan has landed one last blow!  Glenfarclas' raw and unruly taste mid-palate is there a little in the finish causing a tactical error in this match to the death.  The refinement of the Macallan in the palate and through to the finish results in an uppercut that takes the Barbarian to the mat and to his most certain death. 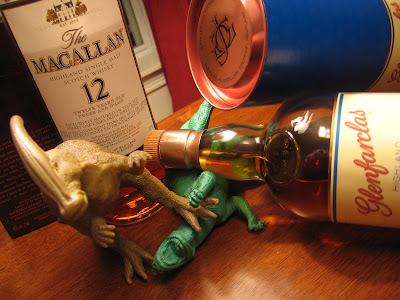 While the Suave and Sophisticated Macallan 12 would have preferred to settle the claims to his title with the upstart Glenfarclas by way of a more dignified duel, he nevertheless prevailed because he kept his balance and guard. 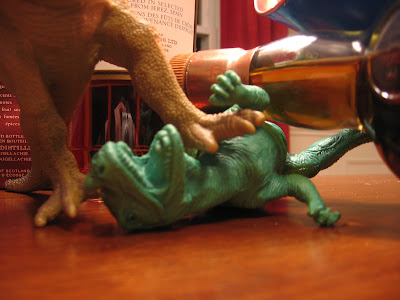 Announcer:  Well there you have it!  The raw and unruly midpalate attack of the Barbarian Glenfarclas was its downfall.  Had he been more balanced and poised as The Macallan 12, he would have been victorious.  Instead, he is under the heel of the Macallan.

P.S.:  These are excellent 12 year old single malts.  Glenfarclas 12 is more robust and also more wild in its sherried flavor profile.  There is ginger or something akin to near alcohol that makes it a little out of balance, and for that reason I prefer the Macallan 12.  Macallan gets a lot of bad press for being too predictable, but I think such a view is a mistake.  The Macallan 12 is a surprisingly subtle whisky.  The sherry profile is complex, but subtle.  Some critics I think have equated subtlety with being predictable or not interesting.  That's the key to Macallan 12, the appreciation is in it's refinement and restraint.  Similarly, the failure of the Glenfarclas is it's a little too robust.


Copyright © Jason Debly, 2009-2012. All rights reserved. Any and all use is prohibited without permission.
Posted by Jason Debly at 11:29 PM