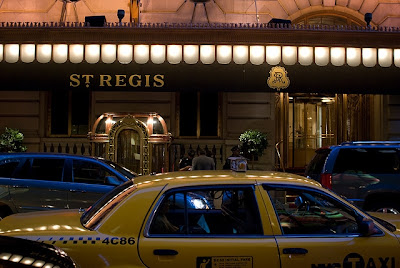 While I was in NYC, HD and I decided to hit the town one night.  He suggested we have a cocktail before dinner.

So, we caught a yellow Crown Vic cab in the late afternoon that deposited us unceremoniously at the footsteps of the St. Regis hotel.  We wound our way past the doorman, down a marbled hallway, encountering a headless clothing boutique mannequin, clad in Brioni (for people who have more money than brains) posing imperiously from behind a display window, and an Alain Ducasse restaurant, before arriving at our destination: the King Cole Bar. 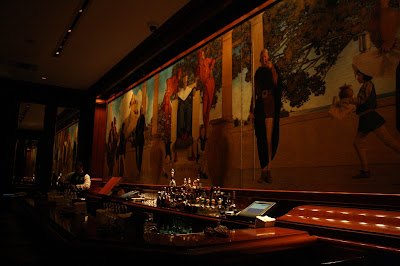 The King Cole Bar is a throw back to another time in many ways.  It's old school.  Bartenders in bow tie with black vest oversee a bar made of polished, dark, very fine wood (mahogany no doubt), in a dimly lit room with a lot of history.  The kind of lighting in this bar is very flattering to gentleman and ladies who may not fair so well in brighter environments.

A number of famous patrons have saddled up to this bar.  This establishment has served: Salvador Dali, Marilyn Monroe, Joe DiMaggio and John Lennon. 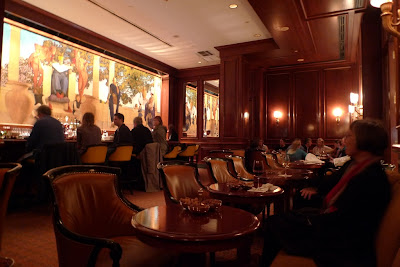 While the famous patrons would be a part of the appeal of this establishment, when I first went in, I was not aware of it.  For me the appeal of the bar was the dark wood, the serenity, no flat screen TVs hanging from ceilings, while pop music blares from speakers.  No.  Here, it was hushed conversation and masterful drinks being made by an excellent bartender.  It should be noted that the Bloody Mary cocktail was created by a bartender working the King Cole Bar. 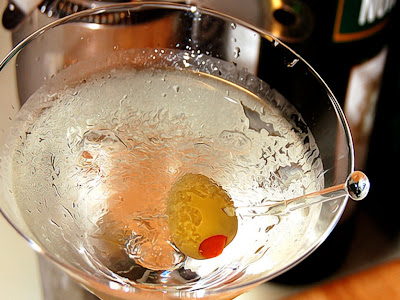 So, let's get down to business.  What did we drink?  HD said he was having a vodka Martini, and I thought damn, what a great idea and an answer to a terrible existential problem I have had for quite sometime.  However, I opted for a classic Martini made with gin.

I gotta make a confession.  A weighty problem has plagued me for years.  You see, twenty years ago, I had the best damn Martini in Toronto.  I was with a boss of mine, Gerry H., a guy that I actually admired because he was a decent, honest, leader of men (qualities that are a rarity in the workplace these days).  He drank Martinis and ordered us some.  I was apprehensive, fresh out of college, whose palate was accustomed to stale beer and popcorn.

The drink in Toronto was wonderfully dry due to the great combination of sweet and dry vermouth, gin with its herbal notes that made me think of pine needles.  It was hauntingly great because it is a simple drink, yet there is a lot going on that is very hard to articulate.

A few years later, I left Toronto for Fredericton, and while the latter city is nice for a lot of reasons, it does have one terrible failing: it is impossible to get a decent, properly made Martini in any drinking establishment.

I have ordered quite a few Martinis in Fredericton at the better watering holes and they have all been terrible.  Each new drink I would order over the years was followed by crashing disappointment that was on par with what a kid at Disney World must experience upon seeing Snow White taking a smoke break behind a trailer.

In my hometown, the bartenders are typically college students who spent way too much time listening to Phish and flipping through tattoo catalogues, when they should have been learning how to put together classic bar drinks.

So, the great weighty question upon my mind was whether or not my first affection for the Martini had more to do with mood, atmosphere, great company and conversation, rather than the drink itself.  I kept thinking it was the drink, hoping I was not mistaken. 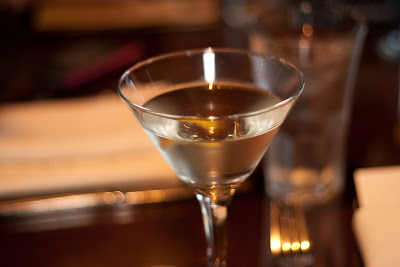 Back to the St. Regis.  (This stream of consciousness writing of mine can get out of hand, my apologies.)  Ok, where was I?  The St. Regis, right!

So, I ask the barman for a classic gin Martini with olives.  He makes it in a matter of seconds, shaken, strained and poured in front of me.  I was wondering if anything whipped up that fast can be any good?  I mean if he spent ten minutes on it like a barman at the Four Seasons did for a Manhattan I had in Vancouver, there is an understanding of the source of a drink's greatness.

The barman at the St. Regis did not disappoint.  His Martini was sublime, immaculate and classic.  It was dry, but balanced.

A poorly made Martini tastes like raw alcohol with Splenda.  You are only dealing with three/four ingredients and so if the proportion, the method, lack of strainer, improper use of ice, etc take place, the result is a disaster.

My only regret about the King Cole Bar is that my visit was too brief.

Two drinks with tip ran about $50.  Yeah, it's steep, but once in a while treat yourself, have one of the greatest drinks in one of the world's greatest cities!

P.S.  Thanks Cousin for the great visit the King Cole Bar.