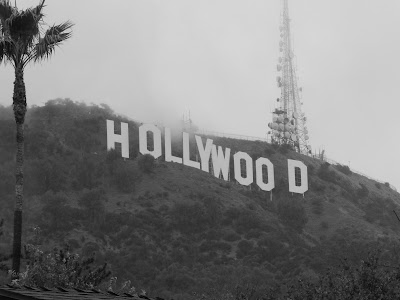 A good friend of mine was in Hollywood a month or so ago to attend his cousin's 40th birthday party.  His clan live pretty large.  Another cousin of his runs a hedge fund, uses a helicopter to get around NYC (to avoid those pesky traffic jams) and has been known to give a former president a ride on his leased jet.

Anyhow, I get a call from my friend.  He says he's on Rodeo Drive, and he was wondering what bottle of scotch I wanted. (Seriously! I can't make this pretentious sounding shit up!)  Being in L.A., he can pick up something that I can't get where I am.  Well, I scour the website of a purveyor of fine spirits that he is within walking distance of and after much deliberation (not!), I ask him to pick up a bottle of The Macallan 15 year old 'Fine Oak.' 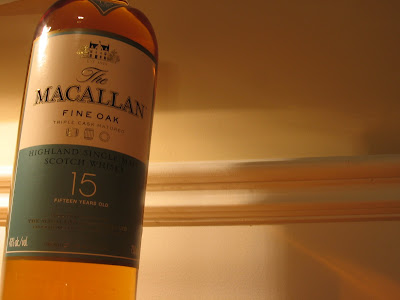 This particular malt is available where I live.  I have had it before and reviewed it actually a few years ago (click here). At that time, it was pretty impressive but had a funky cooked fruit note on the finish.

Palate (undiluted)
Orange marmalade, slight vanilla, a transition to summer savory, and other herbal notes before the arrival of some oak. 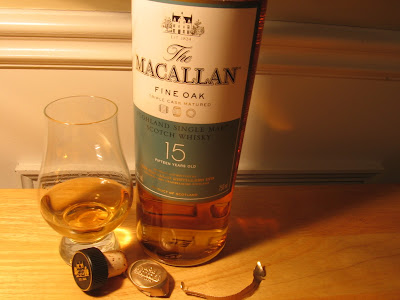 General Impressions
The Macallan Fine Oak 15yrs is produced by way of aging the 'new make' spirit in Spanish and American oak casks that previously held sherry and bourbon.

Macallan is a distillery famous for pronounced sherry bombs like the 12 and 18 year old editions.  The Fine Oak is much less so.  This is due to the considerable use of American oak casks that previously provided a home to bourbon.  The result is a malt with a much less sherried presence than its brethren.

The last time I had a bottle of this malt was three years ago.  A lot has changed in the intervening years.  This scotch used to be very impressive, though still not deserving of the high price.  Three years ago, you got a bigger punch of sherry, wine like oak and a red wine influence.

Now, it has gone totally orange.  Oranges!  Orange peel, big oak notes, some spices and salt and that's about it.  Light bodied too.  It is not nearly as complex as it was three years ago.  In fact, that is the chief weakness of this bottle.  No great complexity of flavors.  Just some rather flat orange, oak, spice, sea salt, a bit of ginger.  Maybe 'flat' is an over the top descriptor.  What I want you to understand is that these flavors are uninteresting and presented in very simple fashion.  Even at $85 this malt is not delivering.  It's decent, pleasant, but far overpriced.  The high price means no value for money.  There are so many better lightly sherried malts out there.  I think of Glenlivet 18yrs as being a far better and a much more affordable selection.

Sadly, this malt is the equivalent in Hollywood terms of a disappointing movie that goes straight to video.

Copyright © Jason Debly, 2009-2013. All rights reserved. Any and all use is prohibited without permission.  Photo credit:  Hollywood sign photo by Cooke and Craddock who holds all license and copyright.  May not be reproduced without their permission.  Photographs of The Macallan by yours truly and I may permit you to reproduce if you ask nicely!
Posted by Jason Debly at 12:01 AM

Email ThisBlogThis!Share to TwitterShare to FacebookShare to Pinterest
Labels: Macallan 15