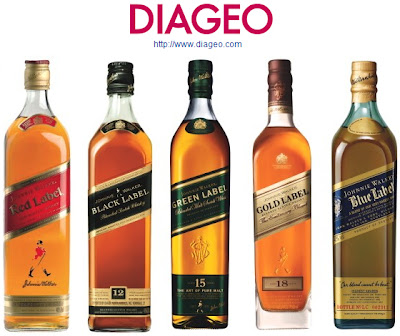 The other day I was trying to figure out what Diageo (the world's largest multinational alcohol beverage company) was doing to their Johnnie Walker product line up.  You know they have discontinued my much loved Green Label, but they have also been tinkering with Gold Label.

Johnnie Walker Gold Label used to have an 18 year age statement.  Not so anymore.  The age statement has disappeared, and now it is Gold Label with the addition of the word "Reserve," but remains a blended scotch.  They have also recently introduced "Platinum Label."  It is the new 18 year old age statement blended scotch in the stable and priced in between Gold and Blue Label.

While web surfing on these weighty matters, I stumbled upon some unrelated and not so flattering stories about Diageo. 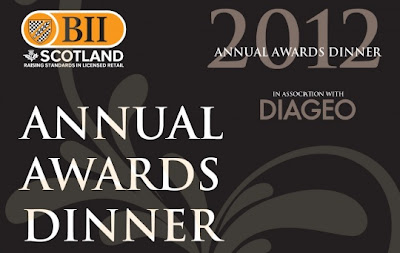 Back in May of this year, The British Institute of Innkeeping held their annual awards dinner.  Weeks in advance of the awards ceremony, a small Scottish beer company, BrewDog, had been selected by committee as "Bar Operator of the Year."  Now, before I go any further in this tale, I gotta fill you in a bit about BrewDog because it has some relevance to a turn of events later in this tale. . . well, at least in my mind.

BrewDog operate a number of brew pubs in the UK.  In addition, they also produce about 120,000 bottles of beer a month for UK and limited international export.  Now, here is where it gets fun.  If you visit their website (click here) you are greeted by some hilarious, pushing-the-envelope, serious bad-ass, wannabe beer bravado:

"BrewDog is a post Punk apocalyptic mother fu*ker of a craft brewery.

Say goodbye to the corporate beer whores crazy for power and world domination.  Swear allegiance to the uncompromising revolution." 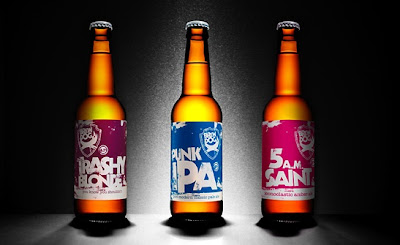 These guys got some serious attitude.  Especially when you consider past and present titles of their various beer bottlings: Punk IPA; 5 AM Saint; Sink the Bismarck and my favorite . . . Trashy Blonde. 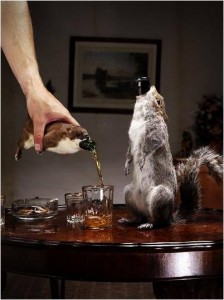 They also pulled a publicity stunt by releasing "The End of History" ale in beer bottles made from dead squirrels (formerly roadkill - I'm serious).  Actually, they just put out a mere twelve bottles. Heh heh!  I suppose, animal loving, Brigitte Bardot will not be a corporate spokesperson for them any time soon.  I also guess when you don't have a big advertising budget you try by other means.

So, now getting back to our story.  BrewDog attend the awards evening, a gala dinner, and await the trophy.  At the dinner, Diageo people learn, for the first time, of BrewDog's imminent award, and one of them (a senior executive) threatens the event organizer that "under no circumstances" was BrewDog to receive the trophy.  If they do, Diageo will pull all future sponsorhip of the event.

So, you might be thinking at this point why would Diageo executives care about such an award?  You would be forgetting that Diageo owns a very respectable/world class stable of beers like: Guinness, Red Stripe, Harp, Kilkenny, and Smithwick's Ale.  (They also own a piece of a bar that would qualify them for the award.) 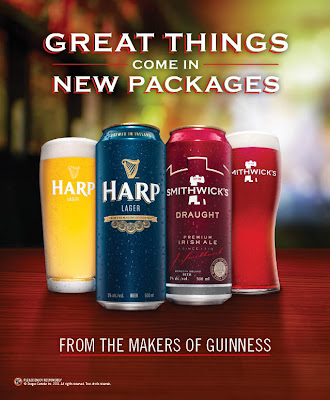 I also happen to think that BrewDog take great pleasure in launching subtle jabs (recall "corporate beer whores . . .") at the likes of Diageo.  So, I would imagine the last thing Diageo wants to see is an event it sponsors make an award to a competitor that does nothing but antagonize them and take the beer industry in directions it views with consternation (see The End of History ales above).  My point is:  there's a history between these two competitiors.

Any how, so what happened?

The announcer read out the award category and declared the winner was Diageo.  A Diageo executive hopped up on to the stage and accepted the trophy, complete with engraved plaque which read: "BrewDog: Bar Operator of the Year."  Meanwhile, BrewDog people and members of the awards committee stared in disbelief.

BrewDog did not take this turn of events laying down.  They went public with the matter on their blog and provided a quote from the chairman of the award committee:

"Diageo (the main sponsor) approached us at the start of the meal and said under no circumstances could the award be given to BrewDog.  They said if this happened they would pull their sponsorship from all future BII events and their representatives would not present any of the awards on the evening.

We were gobsmacked as you by Diageo's behaviour.  We made the wrong decision under extreme pressure.  We should have stuck to our guns and gave the award to BrewDog."

So, you may be wondering why am I writing about a screwed up awards ceremony?  First of all, I was shocked to read the stories.  I mean we are in 2012!!!  Isn't this the kind of dirty tricks, pseudo corporate Watergate type nonsense that doesn't happen anymore?  Evidently not.  Secondly, it reinforces my opinion that whisky award events are hardly independent/transparent evaluations of spirits, but rather just another opportunity for Diageo and other big spirits companies to promote their brands.

There is nothing wrong with marketing.  Just don't lie to the consumer by claiming this bottle or that 'won' a 'gold' medal!  Whisky 'competitions' should be replaced by whisky 'festivals' where companies present their wares and we, the people, celebrate them.  Whisky critics, master blenders and learned brand ambassadors can chime in too.  Some of those people we respect enough that we want to hear their thoughts.  Festivals of this sort ultimately help the consumer, taste and decide for themselves!  And . . . and the drinks companies benefit too by maintaining and hopefully expanding market share!

Accordingly, I have not wavered from what I wrote two years ago about the International Wine and Spirits Competition.  Another corporate marketing opportunity at best.  I always disregard such awards and medals trumpeted by the companies that own various scotch whiskies because I know they are nonsense.  Explore the IWSC site and see for yourself how many scotch whiskies won "gold."

P.S.:  I really like BrewDog's marketing approach.  It is unorthodox, points a stick in the eyes of industry players, all the while having  a lot of fun doing what they do.  More power to them.

Diageo on the other hand really need to clean up their act.  In an unrelated matter they settled bribery charges in 2011.  Click here to read the Wall Street Journal article about yet another tale of woe.

By the way, it should be noted that Andrew Cowan (pictured above) of Diageo was not the senior executive who threatened the BII organizer.  Mr. Cowan is the executive tasked with cleaning up this public relations mess.  An unenviable position to be in for sure, but he will probably succeed if he looks to other good corporate citizens such as LLBean.  While LLBean is not nearly as large as Diageo, it is a billion dollar company (privately held) with an impeccable reputation.  They worked hard to achieve such a reputation and more importantly maintain it.  They sponsor events in their field of commerce, but never have this kind of scandal.  Mr. Cowan will no doubt examine how his company got into this mess and plot a strategic plan to prevent it from happening again.  Of that I am fairly certain.  Call it a gut instinct.
Posted by Jason Debly at 9:45 PM