Musings on Master Classes and the 2012 New Brunswick Spirits Festival 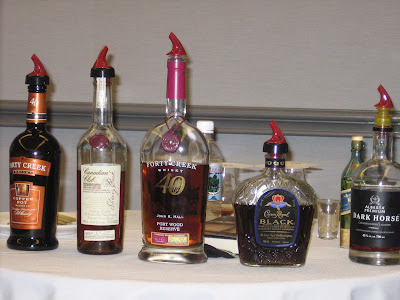 'Master Class' . . . . Those two words can be intimidating.  They evoke memories of post-graduate existentialism classes held in a dimly lit university classroom, where the keener students hang on every utterance of  a greying/Harris tweedy professor, who speaks cryptically from a red leather, wingback chair.  There is usually one student, attempting to appear pensive, who is actually staring blankly out a window at the ivy covered, red brick, Georgian architectural style campus buildings thinking "I haven't gotta clue what that old fart is saying.  I must be stupid.  I'm a poser.  I don't belong here."

When I scan the promotional agendas of various whisky festivals, invariably there are 'master classes' on bourbon, scotch, Canadian whisky, etc, which trigger deep in the gut, flashbacks of college-era dread (but maybe not Kierkegaardian dread, as I was the student staring out that window, not understanding Kierkegaard.  Hell, I could barely spell the Danish bore's name!).

Canadian Whiskies Master Class
Anyhow, at this year's New Brunswick Spirits Festival, the agenda identified several ostensible post-graduate classes in whisky.  One of them was on Canadian whisky and led by an authority: Davin de Kergommeaux

Mr. Kergommeaux has written a truly definitive book on Canadian whisky.  With great trepidation, I paid the grand sum of $10 to attend the tasting.

Let's cut to the chase.  I have been to a lot of "master classes" on whiskies and Davin's was the best.

Yes, he put me and the audience immediately at ease with his deft use of humour and charm.  But, all those brand ambassadors earning their salaries do the same.  What Davin (not a brand ambassador) manages to do, that others do not, is actually create a learning environment.

I learned a bit about Canadian whisky.  I walked out of that room a little wiser.  He talked about congeners.  He explained that those chemicals, in minute quantities, deliver nearly all the flavor of distilled whisky.  I learned about key differences between Canadian whisky and American whisky (principally bourbon & Tennessee whiskies) like when blending of constituent whiskies takes place.  In America, the blending of whiskies takes place before transferring the spirit to casks for ageing.  In Canada, the blending takes place after years of ageing various whiskies in a multitude of differing casks.

Appreciating the Distinctiveness of Canadian Whisky
I listened to a couple of Davin's great insights too.  The most important one pertained to appreciation of Canadian whisky:  Remember that Canadian whiskies are different from single malt scotch and American whiskies (bourbon, Tennessee whiskey).  In Canadian whisky oakiness is generally positive as long as it is not overly bitter, as it often becomes in old Scotch or bourbon.  It is more important that the oak be in balance and accentuate distillery character.

While he did not mention it at his tasting, I have learned from him an important consideration when evaluating Canadian whisky.  Most of these whiskies taste lighter than scotch whisky.  One must not assume that heavier more concentrated flavors are better.  Light flavors can be just as complex and nuanced.

Autographed Book
My thirst for knowledge of all things Canadian whisky got me thinking that I should pull the trigger and buy Davin's book.  I mean, I got the author's attention and if I behave myself, I can probably get him to autograph his little piece of Canadiana.  So, I forked over some dough, he made change and boom, I had an autographed copy of his book.

So, the moral of this story is to be bold.  Go to whisky master classes.  Do not be intimidated because you feel your knowledge of whisky is practically nil.  You know what?  The brand ambassador or whoever is presenting will do their best to make put you at ease. 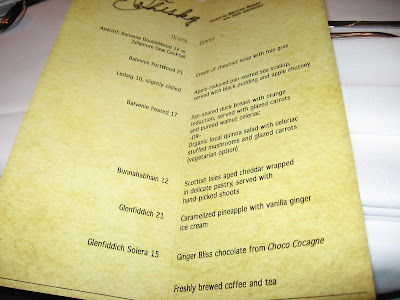 The NB Spirits Festival takes place over three days.  Hence, there is something going on everyday.  For me, the highlight is not the grand finale where everyone joins in a hotel ballroom and samples hundreds of whiskies.  Nah.  The highlight is the whisky dinner that takes place on the first night.  It's expensive I suppose, but hey I think to myself, I will be dead a long time, and suddenly I can rationalize the expenditure ($140) for six courses paired with six whiskies and a final one to send you gently into that good night.

Like the master classes, it can be somewhat intimidating to sit down with total strangers.  Dining on cream of chestnut soup with foie gras and sip 21 year old Balvenie Portwood doesn't necessarily come across as comfort food either.  But you know what, as awkward as you may feel, you gotta push yourself.  I guarantee you that by the second whisky flight, the conversation will start to flow and that other couple at the table that did not seem all that friendly are warming up.  They are incredulous at how gorgeous that whisky pairing of 10 year old Ledaig is with black pudding.  You chime in and before you know it, you have made new friends or at the very least great acquaintances for the evening.

This year, I was not going stag.  I recruited a couple of whisky dogs from the SPCA, I mean whisky club. 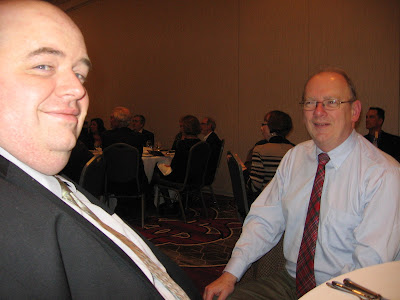 As you can see, it was pretty easy to twist their rubber arms to attend.  The organizer seemed to strategically position my table far from the learned whisky celebrities who hosted the event: Martine Nouet and Sam Simmons.

Martine Nouet is a veteran whisky critic who wrote about whiskies and the wonderful possibilities when paired with food, long before it was fashionable.  So, back in 1990 when Sinead O'Connor created a stir by her classy move to demand the American national anthem not be played before her planned concert at the Garden State Arts Center in New Jersey, Martine was writing about food and whisky pairings.  Good to see there is a God, as Martine is still doing her thing and well Sinead is where?  Or better should I say who?

Sam Simmons was the first whisky blogger on the internet (click here).  He was at that time a PHD student in English at an UK university when he became enamoured with whisky.  His blog is aptly entitled Dr Whisky and a great resource for those readers searching for tasting notes.  His blog and passion attracted the interest of William Grant & Sons, and now he finds himself the global brand ambassador for Balvenie.  Nice work, if you can get it.

Ledaig 10 years & Blood Pudding
In any event, these two luminaries walked the crowd through various whisky and food pairings.  My favorite was the pairing of the pungent and peated Lediag 10 with pan-seared scallops with black pudding (a type of sausage). 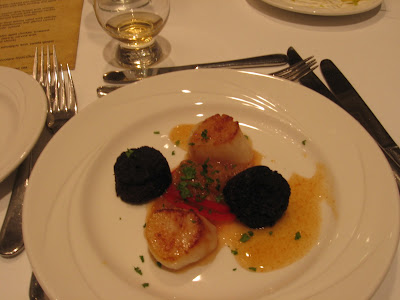 Wow!  The stars lined up for that one.  The peated, salty and smoked kipper palate of the Ledaig was married with the fresh from the sea scallop, who flirted with the earthy bridesmaid, blood pudding.  Wow!

Bunnahabhain 12 years
Bunnahabhain 12 was a nice discovery for me.  Molasses, blackberries with some Maritime notes.  A lot going on, and I need to get a bottle of this for further study and posting a proper tasting note.  All I know is I liked it.

So, in conclusion, the initial feelings of dread passed and in its place was a good time.  Toss your shyness, feelings of inadequacy aside!  Attend a whisky festival where you are and I bet you will meet like minded people and have a great time!

Copyright © Jason Debly, 2009-2012. All rights reserved. Any and all use is prohibited without permission.
Posted by Jason Debly at 10:07 PM