The Evolution of Taste 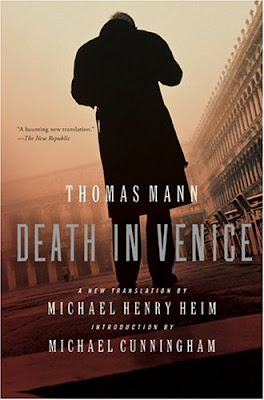 "David is reading Thomas Mann," one rather stout and bespectacled mother said to another in the driveway, as they watched approvingly while he cut across a well manicured lawn in the direction of downtown.  Headed to the library no doubt.  When I took a shortcut across the neighbor's lawn, in a furtive effort to get to school on time, all I heard was an angry yell.

"Death in Venice no less," chimed in the other, more slender mother with the Jackie-O hairdo, flared jeans and too much turquoise jewelry. 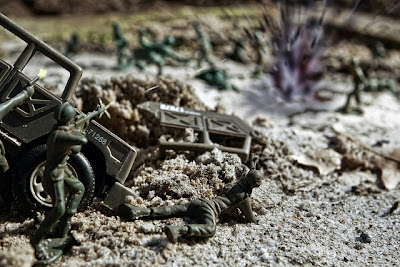 A few yards away, I was playing in a flower bed that was still awaiting flowers, as my parent's house was new construction.  I used that patch of earth as a sandbox.  Had my Deetail army men arranged in the dirt, where I staged battles between the Desert Rats and the Afrika Korps replete with my whistling sounds of bombs exploding and gunfire.

I noticed the stiff gazes of Betty and Wilma settle upon me, and one of them rolled her eyes skyward, probably not out of fear of incoming armaments.

A couple of years later, when I was about 15, I decided to better myself and be more like David.  After all, I wanted parents to talk about me in hushed and reverent tones too.  So, I stopped re-reading my favorite post-apocalyptic science fiction novels, The Tripods, and try my hand, or rather my mind, at Death in Venice.

I didn't understand it.  I read words on a page, but I couldn't understand what the author was trying to convey.  It was just one giant snorefest.  I tried some other tomes, like 1984, Animal Farm and Siddhartha with no success.  I quickly slinked back to John Christopher young adult novels, as well as the high octane/easy reading thriller works of Jack Higgins with great titles like: The Keys of Hell, Midnight Never Comes, The Last Place God Made.

Not much changed for me between the ages of 15 and 45.  Maybe I moved from Jack Higgins to Robert B. Parker.  I read all those Spenser novels and damn they were good.  Nice light brain candy.  They fed a need.  Work involved heavy reading and high stress.  So, when not at work, Mai Tai reading was the order of the day. 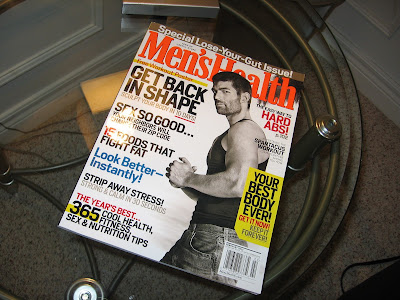 "Sex So Good . . . Your Neighbors Will Change Their Zip Code"

Yeah, I still indulge in Krispy Kreme reading like "Men's Health," but lately something has changed.  I have a growing appetite for content with a little more fibre.  Maybe not as wholegrain and organic as  Death in Venice, but less formulaic and simple than the high-fructose corn syrup pulp my mind has been gorging on for the past twenty-five odd years. 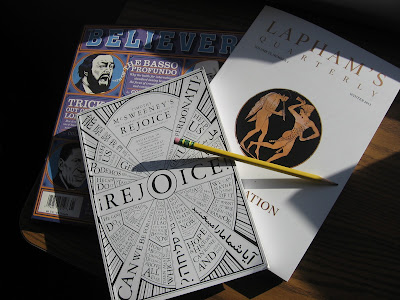 So, recently I have been enjoying and even understanding some quirky short stories and essays that turn up in off-the-wall, hidden from public view, low circulation journals like:  The Believer Magazine, McSweeney's Quarterly, and Lapham's Quarterly.

McSweeney's Quarterly describes itself as a journal that at one point published only works of authors who had been rejected by other magazines.  What an attitude!  I like it.  Eventually they abandoned that strategy, but hey, to even go there is admirable.

Initially, my tastes in whiskies were exclusively devoted to the light, the sweet, the honeyed and super smooth.  There were no Hermann Hesse malts in my midst.  I placed an enormous premium on blended scotch, Canadian and Irish whiskies because they were smooth, not biting, and pretty much devoid of smoke and peat (elements that I found offensive).

I remember being at a whisky festival many years ago and taking a big gulp of Laphraoig.  I started to gag and my eyes watered while I did my best not to projectile vomit all over the display booth.  Given that experience, no wonder I did not like peat, smoke, and iodine elements.

Anyhow, I was thinking that was the worst stuff.  Matter of fact, at that festival, I tried a number of single malts and they all were just 'awful' in my novice opinion.  Too strong, rough, etc.  Ardbeg was 'poison.'  So, I spent the rest of the evening bear hugging blends and was happy to note there were no long line-ups of patrons for Famous Grouse, Chivas, Johnnie Walker and others. 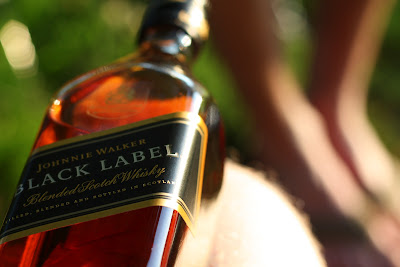 The first scotch whisky to hook me was Johnnie Walker Black Label.  I was playing cards and wanted something to drink, anything but beer.  Beer uncomfortably puffs me up and gives me the munchies (not a winning combination for someone struggling with their weight and a body-type similar to John Belushi).  Someone said they had Johnnie Walker Black.  I said ok.  I loaded a tumbler up with ice and poured a double.  Let it sit while I played a few hands and then I took a sip.

I was hooked.  I was expecting something nasty, but that was not the case.  The ice had diluted the whisky such that it delivered a nice caramel, orange rind taste with a bit of smoke.  Wonderful.  A little sip went so far.  Put the glass down and continued to play.

Having had a positive experience with Black Label, I would buy it repeatedly for a few years.  It had punch, but with some ice, I could tame it to something I could enjoy.  I had a real aversion to strong tastes, and that is why ice played a big part of my early experience with whisky. 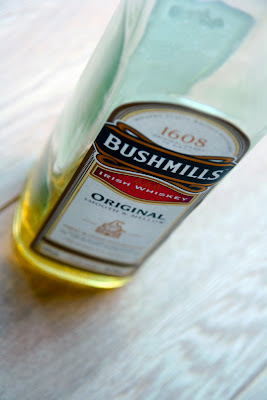 After a while I ventured on to other whiskies.  Bushmills with its light nutty flavors.  Cutty Sark's apples and limes, and then onto malty/grainy Famous Grouse.  Chivas Regal 12.  And then there was Teacher's Highland Cream.

Chivas and Teacher's were a bit of a revelation because they introduced a lot more texture and nuance to the flavor experience.  I was starting to enjoy the nip, the slightly coarse or unruly flavors.  Experimenting, I reduced the amount of ice from something resembling the polar cap to a single cube.  And then, I would run out of ice, too lazy to go upstairs from the basement for more, I began sipping neat and never looked back.

Transitioning from Teacher's and Chivas, I tried single malts for the first time.  Glenfiddich 12, Balvenie Doublewood 12, Macallan 12 and then Cragganmore.  Cragganmore 12 neat with maybe half a teaspoon of water unleashed the complexity of flavor I read about elsewhere, but for the first time understood.  Where blends seem to meld all the flavors together so nothing is dominating or distinct, Cragganmore was a single malt that was subtle but layered and woven.  Plus it was a wild honey fiesta with a dash of peat and smoke, which was and remains one of my favorite flavor profiles.

From Cragganmore, I moved onto Dalwhinnie, Oban, Highland Park and many others.  Eventually, I developed an appreciation of the Isle of Skye and Islay.  Developing an appreciation of smoke and peat bombs like Laphroaig took many years.  After spending a lot of time with powerful Speyside malts I was able to move on to Islay.  The key for me and Islay is to take the tiniest of sips.  A little goes a very long way.

So, my taste in scotch whisky has evolved from a passion for gentle, smooth, honeyed blends to include the smokiest briar patch fires lit on Islay.  But, a question remains.  Do I still like those first loves or are they like high school?  Happy you went, but glad you never have to return.  Let's look at those blends again.

Johnnie Walker Black - You're still the greatest of blends.  The gold standard against which I measure all the others.  Always in my cabinet.

Famous Grouse - I recently picked up another bottle of this sweet, malty, pencil shaving scotch.  It is far too grainy for my tastes now.  Can't stand it, and deep down there is a part of me that is really embarrassed forever being enthusiastic about this swill.

Chivas 12 -  I still like Chivas 12 and think it doesn't seem to get the street cred that Johnnie Black enjoys.  Chivas and my enjoyment of it has a lot to do with my mood.  It usually surprises me as to how good it is.

Bushmills (white label) - I haven't bought a bottle in ages, but it still is in my mind the ultimate starter whisky.  So, gentle and alluring, before you know it, half the bottle is gone and you are pouring out your heart to the bartender who has heard it all before.  Would I buy another bottle?  Maybe not, but I would never turn it down.

Cutty Sark - Oh my G-d this is simple stuff.  Pleasant enough, not bad, but I have moved on.

Teacher's Highland Cream -  Still love it as much as the first bottle.  Not much on the nose and what is there can be confused for a petrol barrel in Siberia, but the taste is like biting into a bacon and tomato sandwhich.  I always have this in the house.  My go-to comfort scotch.

Now, will I read some Thomas Mann or Robert B. Parker?  Hmm I think I will opt for the latter with a dram of Teacher's to keep me company.