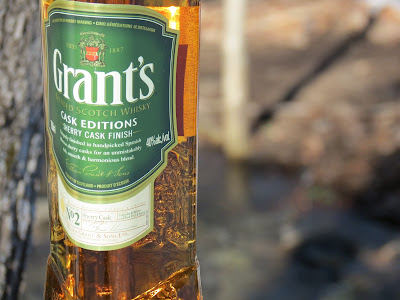 I am not a fan of Grant's Family Reserve.  A bottom shelf economy blend that brings to mind what it must be like to lick a rust encrusted copper pipe.  Besides the copper plumbing notes, it's grainy, thin and lacking in character.  Let me be more precise, it is a blend that exhibits the character of no character.  Capisce?

For a couple of years now, the people at William Grant and Sons Ltd. have been releasing what they call "Cask Editions."  The concept behind the Cask Editions is to take the not so delectable Grant's Family Reserve and age that blended Scotch whisky briefly (up to four months) in casks that previously held another alcoholic beverage (beer, sherry, etc.).  The aim of this finishing process is to hopefully impart interesting and pleasing flavors upon the exceptionally unexceptional Family Reserve.

So, their first experiment was to age Family Reserve in casks that previously held Scottish beer (Innis and Gunn - good beer by the way).   Hence, the release was unimaginatively entitled: Ale Cask Reserve.  An interesting experiment that improved upon the Family Reserve, but not to the point of lifting the blend out of mediocrity.  The most recent release is the "Sherry Cask Finish."  Given the genealogy of Grant's Cask Editions Sherry Cask Finish, I was not expecting much. 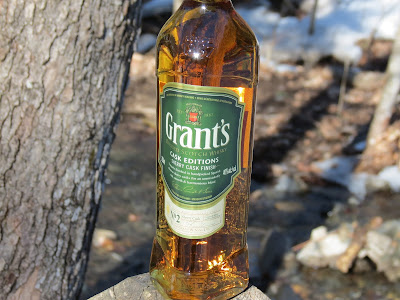 General Impressions
The nose on this entry level blend was not bad.  Basically apple juice.  That's okay.  Moving to the flavor profile, again, it was not terrible.  A decent delivery of apple pie, malt, honey, and some breakfast oats too.  What surprised me was that for a blend that was supposed to be finished in sherry casks, I did not detect a lot of sherry in the flavor profile.  Really quite faint.  Hell!  Very faint, practically absent!  For those seeking lots of sherry notes, look elsewhere.  Grant's Sherry Cask reads like a typo.  It really is a stereotypical Speyside fruit cup style blend.  Hardly sherried at all in terms of flavor.

Of the fruit cup in syrup flavors that are presented, the delivery is simple.  Very linear, but at this price point, such a style of whisky is not breaking any rules.  So, so-far, so-good right?  Yup, until you experience the 'finish.'  Once this baby is down the hatch, your plain-jane chevy sedan of a blend will suddenly veer off the highway, through a Do-Not Enter, One-Way barrier and straight off a cliff a la Thelma & Louise. 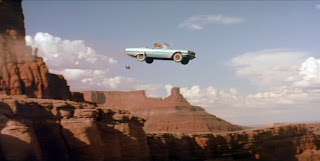 What happened?  This blend started out okay, but once swallowed you encounter a cheap, boozey heat, and stale cigarettes.  The interesting thing about this whisky was the longer the bottle was open, I mean as I returned to it a week later, and another week and so on, that finish became less grainy and acetone, but only up to a point. 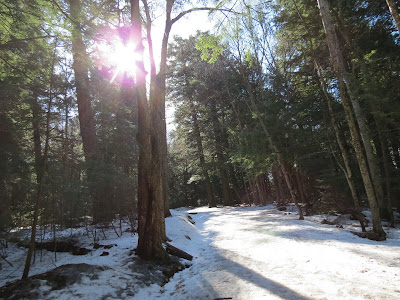 I had two bottles of this blend.  One I purchased a while back and another given to me from a friend over the holidays.  So, the first bottle was gone. No review written as I pondered what to say.  My first reaction was just to trash this whisky and move on, but it did have some redeeming value.  I just found it hard to put my finger on it.  It was easy drinking as blended Scotch is purposely designed.  It had some charm, but what exactly was the charm?

I had to sort all of these thoughts out.  So, in order to be fair to the whisky and my review, I and the bottle went for a walk in the park, earlier this Spring.  No drinking involved on this jaunt to the local forest with groomed trails, just the bottle, a camera and myself.  Took a few pics and tried to figure out how to articulate the charm of this blend.  There was a piece to the puzzle that I was missing. 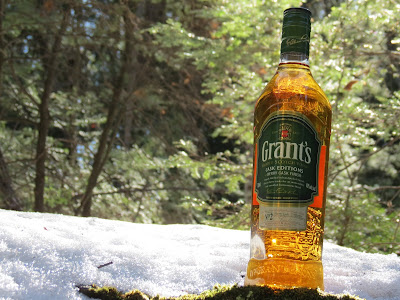 I walked for about 45 minutes, occasionally setting the bottle down, snapping a few photographs, attracting puzzled looks from passerbys, and then moving on.  I was getting warm, tired and thirsty.  And then I had an epiphany.  This whisky would probably be refreshing if paired with some fruit.  What fruit?  Apples?  Nah.  Over kill.  What could be paired with this whisky that would compliment it and take that nasty finish away?  Watermelon I thought. Quick trip to the grocery store, and back home, I sliced up some watermelon and paired it with the Grant's Sherry Cask.   If I took a sip of this blend and then a bite of watermelon, there was no acrid finish to contend with.  Instead a nice, refreshing taste of honey whisky notes meeting watermelon.  A marriage worth celebrating.  It would make an excellent food and whisky pairing to start with before progressing into a meal of salmon with couscous.

A friend of mine and I made our way through much of the bottle with the watermelon pairing and concluded that this whisky is most definitely enjoyed with this fruit and probably others.  Tasted neat with no accompaniment was a mistake.  Mind you the website for Grant's suggest serving this neat or with a little water.  I think not.  Try it with watermelon.  Very quaff-able when having lighthearted conversation and contests to see who can shoot watermelon seeds pinched between fingers the furthest! 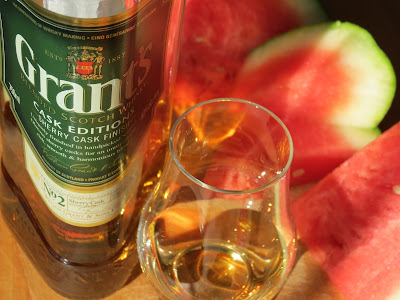 Copyright © Jason Debly, 2009-2013. All rights reserved. Any and all use is prohibited without permission.
Posted by Jason Debly at 12:10 AM