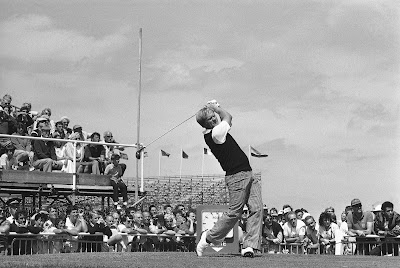 Quite a few years ago I read Jack Nicklaus' autobiography.  I was struck by his tremendous ability to recall virtually every shot he made in major championships.  I mean he recalled the wind direction, the angle of the sun, time of day, the type of grass, the club he had in his hand, and how the speed of the greens affected the ball as it landed and invariably curled toward the pin.  He remembered it all.

Give me a golf club and I have difficulty remembering how many strokes I had on a single hole (yeah, there are that many!).  But, hand me a dram, and if it is a great one, I can tell you exactly what it tasted like, the lighting in the room, who I was with, the garish neck tie you were wearing, and the name of the waitress.  The Balvenie Portwood 21 years is such a memory evoking whisky. 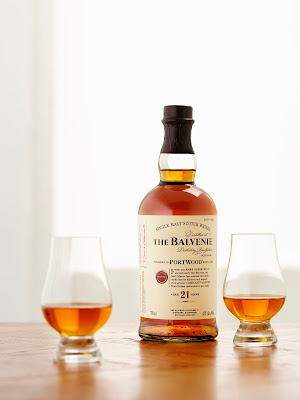 The first time I tasted The Balvenie Portwood was in a non-descript hotel ballroom.  An accordion partition had been pulled across half the room, as there were not many of us on that inhospitable Canadian winter night.  Outside, the evening wind howled over the snow capped parking lot and whipped the ballroom windows with ice pellets.  Above the frigid winds was a vast inky sky with not a cloud just stars twinkling back.

Inside, I was underneath harsh, unrelenting fluorescent lighting with the faint odor of fresh carpet glue rising up.  A whisky tasting was underway.  It started with Tulamore Dew.  A thin, listless, vapid, acrid Irish whiskey that missed it's true calling: skyscraper window cleaner.  I and others greedily stuffed ourselves with the apple and mozzarella cheese that accompanied it, in an attempt to banish the horrid taste to the cellar of our minds, never to be revisited again.

With the food pairing gone, we ravenously popped crusts of bread in our mouths and washed it down with plenty of water.  I drank water with the fervor of a hippie attempting to dilute the chemical impurities of his body, in a futile effort to prevent the return of an acid flashback.  Please God, I promise to be good.  I will go to church.  Just don't let that bad trip or Tulamore Dew ever happen again.  I promise to be good!  I mean it!  Every Sunday I will be there!

Fortunately, the tasting moved to Laphroaig Cairdeas.  A huge step up in quality.  I enjoyed it.  Beautiful stuff.  The Cairdeas was paired with some creamy English Stilton cheese.  Suddenly, the fluorescent lighting was not so annoying.  The phenolic nose of this brilliant Islay took away any memory of the carpet glue smell emanating from the floor.  Maybe I and the others would not slash the youthful looking brand ambassador's tires after all.  He was starting to redeem himself.

The Cairdeas disappeared and was replaced by Laphroaig 18 years.  It was served with pungent Danish blue cheese.  Take a sip and then a bite of cheese instructed the ambassador from the lectern, who I noticed was comfortably out of boxer's reach.  The Laphroaig 18 was a big dog!  A flood of intense, complex peat, black earth, peppercorns and wood smoke that would make any Halloween witch cackle with delight or at the very least generate a bemused look from Joy Behar. 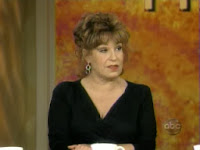 The ambassador twitched at the mic, as he adjusted his Buddy Holly glasses.  His white shirt stuck to his chest oddly with a twist like someone had thrown a pale of water on him.  He could have easily won a Revenge of the Nerds themed wet t-shirt contest.  The thin black leather tie provided ghastly contrast to his undertaker pallor.

I stopped listening to him.  I was in shock.  Whaddya mean you are serving Balvenie Portwood next?  WTF?@*&$#^???  This tasting started with a mild, watery, acrid Irish whisky, then moves to a nice Islay.  Follows that up with a more robust Islay, and now he is pulling a u-turn off the peat and smoke whisky tasting lane and is crashing over the meridian and headed for the oncoming, bone-crunching traffic disaster of a hulking transport truck of a portwood bomb?  Who is this guy?  Slash his tires?  Hell yeah!  He better not have a convertible because I will slice it up like Zorro!

So, there appears a Glencairn of Balvenie Portwood 21 years in front of me.  It is soon joined by an appetizer plate of strawberries and dark chocolate, but not too dark.  60% cocoa.  I am skeptical.  I stare in disbelief much like a JFK conspiracy theorist who is reading the Warren Commision.  I am thinking my palate is ruined.  I just tasted two daisy cutter Islay bombs. and now I am supposed to be able to taste this delicate, very expensive port cask aged single malt?  I pad down my pant pockets to see if I have a jackknife.  No luck, so I pocket a butter knife.  I can already hear the air hiss out of his tires.

The bread basket is empty.  Fortunately, the water pitcher had maybe half a glass worth.  I grab it before anyone else.  You snooze you lose I almost mutter at the college kid in drab gray Aeropostale sweats to my left.  Having bathed my palate in water, I waited as long as I could, and then lifted the Glencairn of Balvenie and take a sniff. 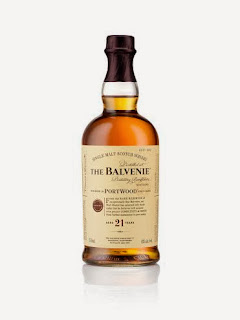 Palate (undiluted)
Heavy body.  Dark fig, crisp black grapes, cinnamon, and so much more than I can articulate.  It is slightly sweet in the beginning but midpalate becomes drier.  Definite French Pinot Noir taste where you taste the soil, earthy but in a very elegant way.  There is a wine complexity to this spirit that I had not tasted before.

I leaned back in my chair.  I knew this was an amazing whisky, and at the same time I was an amazing a--hole for even considering doing undue harm to that brand ambassador's tires.  Maybe the Balvenie 21 would have been even more amazing if it had been the first whisky of the evening.  Maybe.  All I know was I felt like a total schmuck.  So, after the tasting was over, I went up and shook his hand and said he had done a great job and hoped to go to his tastings in the future.

Whether or not his order of whiskies presented was by plan or accident, it worked and demonstrated that a tasting does not necessarily have to start with the gentlest and gradually move towards the most robust.  He also demonstrated that you don't have to stick to just Islays, but that you could jump around and throw in a portwood that would be enjoyed by sherry bombs fans.

I have had The Balvenie 21 year old Portwood several times since then and it has never disappointed and consistently ranked in my mind as a number one pick when budget is not a concern.  The price is not cheap.  Anywhere between $150 and $250 US, but this is one of those rare malts that I think is actually worth it.  You do not see a lot of port cask finished whiskies from other distilleries for a reason.  Working with port casks is difficult because the results can be unpredictable.  To my mind, port casks in whisky are as fickle for a master distiller as the Pinot Noir grape is for the wine maker.

People who enjoy very sherried whiskies like Macallan 18, various Glenfarclas, Aberlour and GlenDronach are going to really enjoy the Balvenie 21 years Portwood.  While the Balvenie is not technically sherried, it shares many of the characteristics of sherried drams.  Port aged whiskies offer more of the sultana and wine notes that are not readily available in the sherry heavy whiskies.

The holiday season is fast approaching.  So, now is the time to think about gift giving for Christmas, Hanukah, Kwanzaa and even the season finale of Duck Dynasty (if you are so inclined).  The Balvenie Portwood 21 years is expensive, but for the true malt fan in your life, this would be a great, great gift.  Highly recommended!