The Challenge of Reinventing the Whisky Review Genre 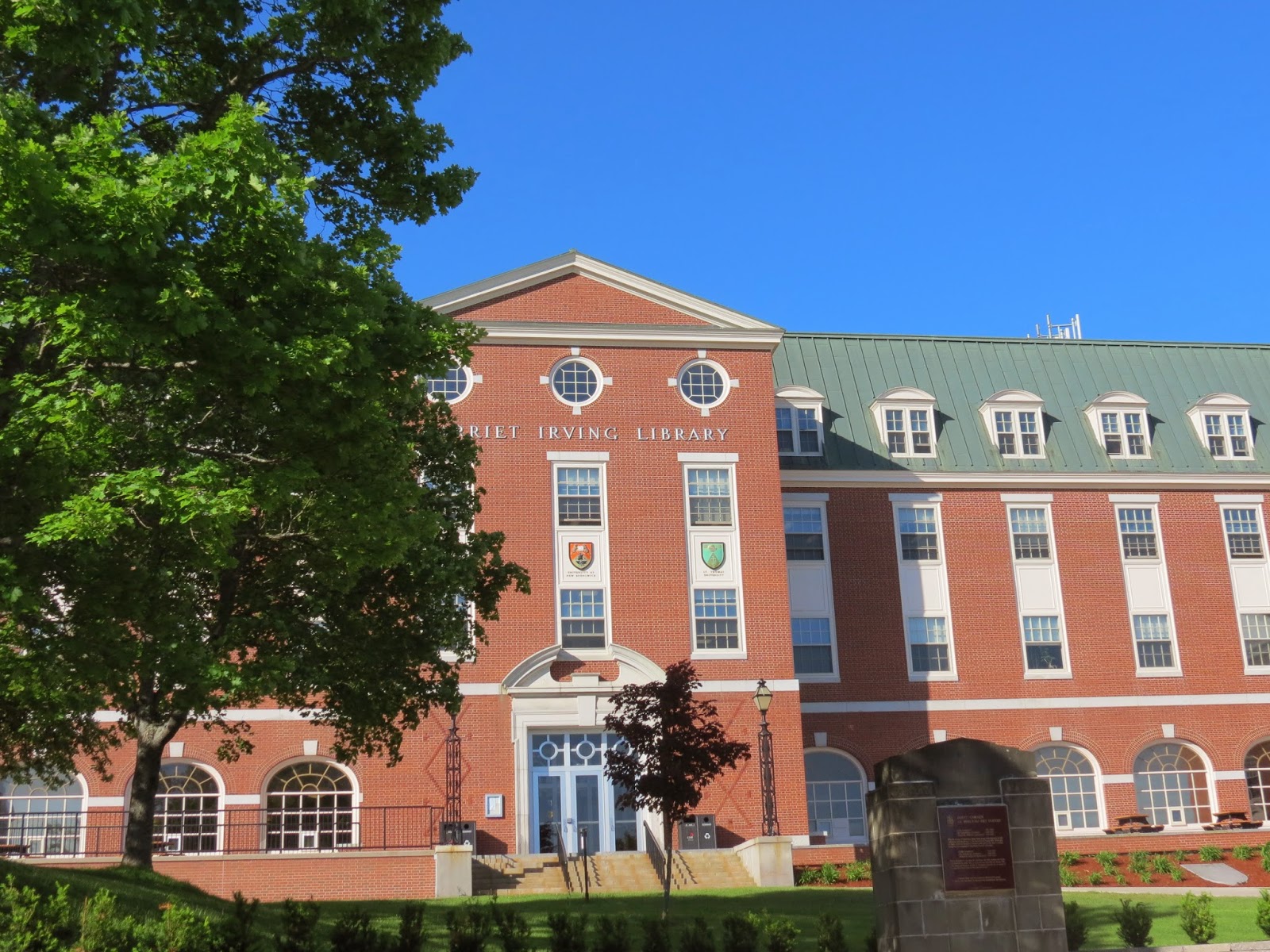 The typical whisky review starts with the writer trotting out a brief biography of a colorful founder, followed by a quaint history of the distillery, which invariably involves a fire, valiant reconstruction, and a succession of owners that reads like the biblical lineage of the House of David.  After the scintillating history lesson, the author veers, as if Stevie Wonder is behind the wheel, into a geography lecture involving an explanation of how the heather adorned landscape, peat bogs and the water running through impacts the flavor profile of the whisky, a narrative that deep down you know it is about as reliable as consulting an astrologer with respect to your love life.  Eventually, the whisky critic may move into some utterly confusing technical geek speak about the special steps in distillation and types of cask wood, which frankly, nobody cares about (other than engineers.  They always want to know how things work).  Finally, we get to the tasting note, which is where we wanted to be in the first place.

There is nothing wrong with the above convention of writing, other than it gets stale mighty quick.  I, like many others, am guilty of such fallen cake, yesterday's forgotten donut, style of whisky writing.  So, lately I've been trying to stretch the genre a little.  I will take ideas from anywhere that spur unusual approaches to a whisky review and try and run with it.  Let's introduce some yeast to the old unleavened writing recipe.

For a couple of years, oh hell twenty odd years or so, basically since I was a student last, in the dark recesses of my mind, I have been haunted by a damn good poem.  No!  Not of the Andrew Dice Clay variety that were circulating my peers dorm rooms (even I have more class than that).

Back in the mid-1980's, when Belinda Carlisle was a hottie about whom I had impure thoughts, I was in the library ostensibly to write an overdue essay.  So, with the Dewey decimal call numbers of some books scrawled on a piece of paper, I and my armload of musty tomes, collapsed into a leather wingback chair in a quiet corner of the library. 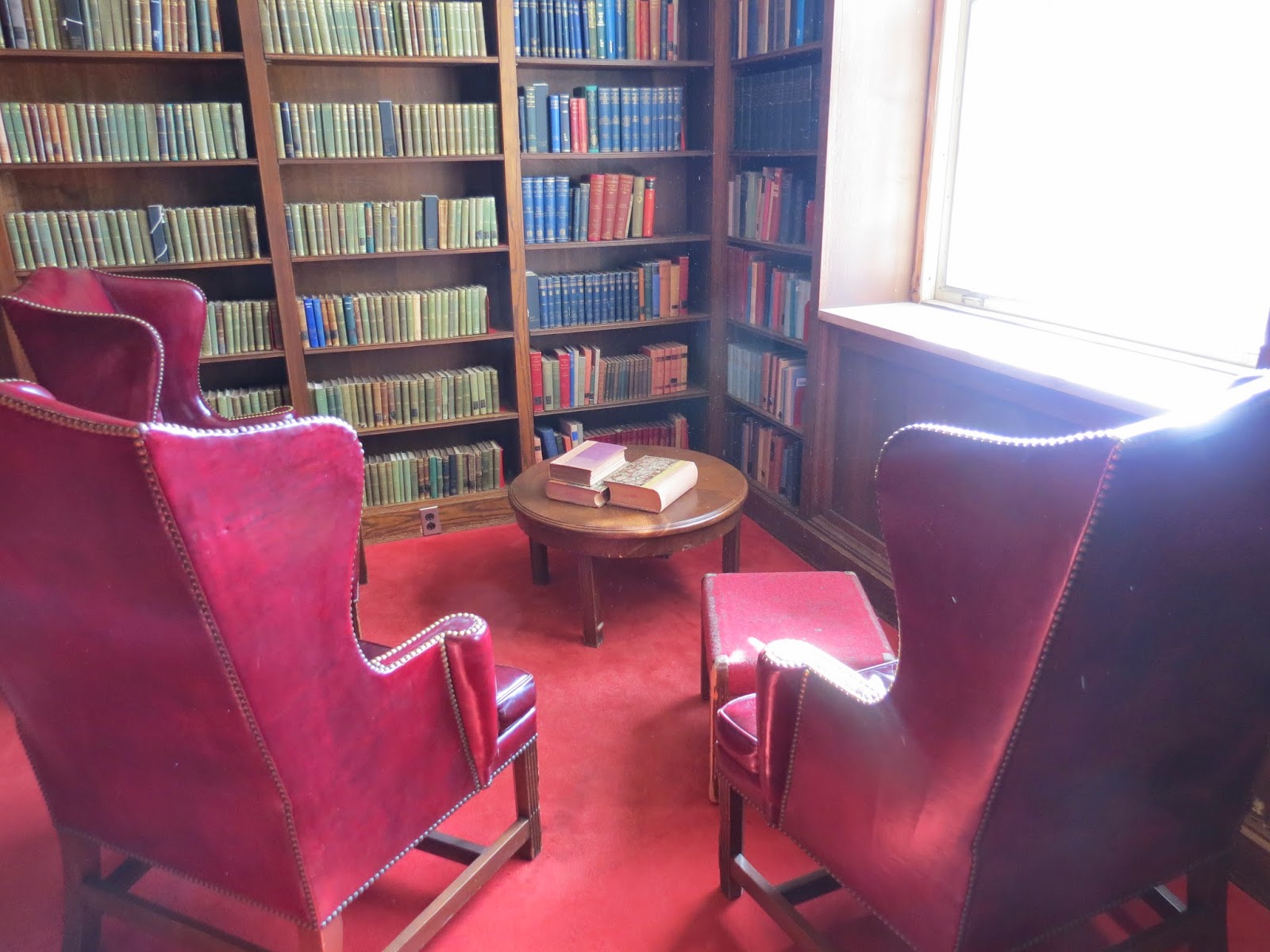 Rather than crack open a book and start reading, I, a 5th degree black belt master of procrastination, noticed a couple of volumes on a little table.  The remains of some other student's abandoned essay research, no doubt.  Modern American poetry books.  And what pray tell was my interest in poetry?  Nil, nada, non, zilch, zero.  But!  It beats getting to the task at hand, namely reading some texts for my essay.

As I read, most of the poems were either too hard to understand, downright bizarre, monstrously boring, or snorefests that would cure one's dependence on Ambien.  So, what did I do?  Yes, that's right!  I kept on reading.  Finally, I stumble upon a poem that was amazing.  It's about this couple walking through a town fair.  They are young, in love, yeah it is a little sappy, but well done.  I think the poem was called "The Fair" or "Town Fair" by Katherine Anne Porter or Anne Porter.  I tried to make a mental note, and thought I will have to copy that poem down and refer to it again.

Years pass, my procrastination abilities well honed, until one day I decide to do a Google search for that poem.  The search is a failure.  I can't find the poem, and I am unsure which of the two Ms. Porters' wrote it.  But, my Google search does lead to an interesting website with a poem by Anne Porter.  The interesting little website is called the 'Poem Elf.'  The premise of the blog is quite inventive.  The lady running the site likes straightforward poetry that one can understand on the first read, and then she likes to tape hard copies of poems on trees in a park, a storefront, park bench, etc.  You see, she writes:

"Poem Elf was born out of two inclinations: I like poems and I like secret tricks. The mystery of a poem and elfin mischief come together as I loiter about until I can post these poems in secret around my mid-western city and wherever else I may be. 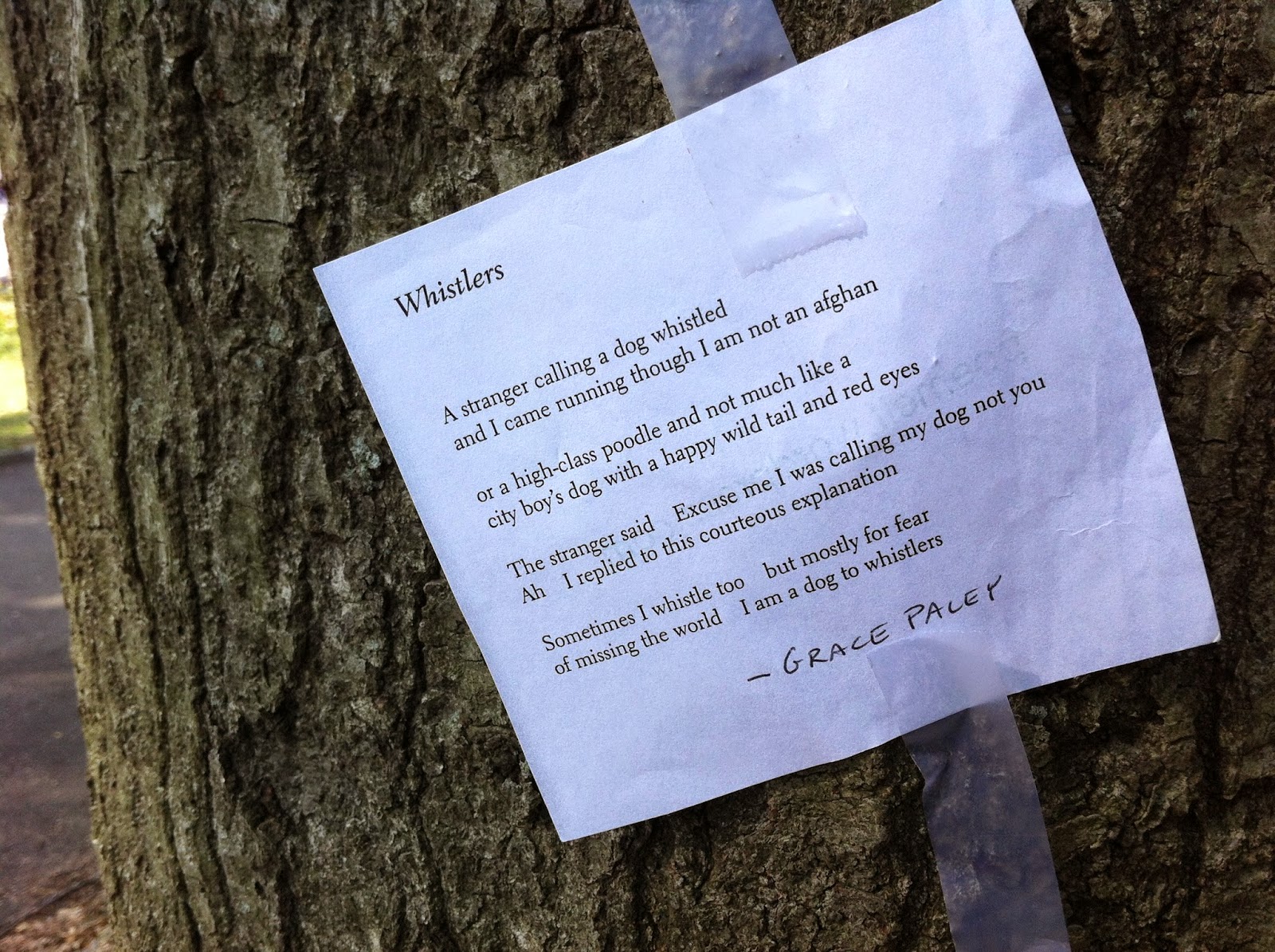 I am neither a poet nor a scholar. My tastes are pretty simple. I like poems I can comprehend on the first reading and understand over a lifetime. These posted poems are intended for everyone, not just for those few who own a shelf’s length of chapbooks, but also for those who last read a poem on a graduation card.

And what happens to each poem after I leave? Perhaps it lands in a trashcan, pulled down from a wall by an amused janitor; or it’s blown away from its scotch tape fastenings, picked up by a bird, and woven expertly into a nest; or raked into a leaf pile and composted, helping things grow in a different way than I had intended; or shoved in a back pocket, forgotten, and balled up in the wash; or, my best hope, tucked in a stranger’s wallet, pulled out from time to time, each reading bringing an expansion of sorts, each reading taken in like a drink to quench the deep thirst we all have for meaning and beauty."

What an inventive way to promote poetry and enjoy that fine hobby!

So, the Poem Elf got me thinking that maybe there is space in this world for even more elfin mischief: Whisky Elf!  I could print off some tasting notes of various whiskies, armed with masking tape, post them in secret around my town.  You know, I could visit the local park and tape my tasting note of  Highland Park 18yrs to a tree, and maybe the note would resonate with someone and they would go buy a bottle, read the note as they tasted it.  Maybe I could post a tasting note of Oban 14 years in a retail garden center, maybe on the pot of peonies, or on the windshield of a car at a dealership and the customer would take the note, buy a bottle and be as enthused as I.  Or maybe the customer would call the police, claiming this public enemy number one is promoting alcohol among our youth.  An investigation of public mischief and charges of crimes against the public morals would be laid.  The criminal inquiry would start with determining who are the usual suspects that would create such a public disturbance and corrupt the morals of the local population?  Hmm the coppers would think . . . who could it be?  Before I know it, I would find myself, in a basement interrogation room with a naked light bulb paired with a lone mosquito buzzing around it while a burly officer, who looked like he walked off the label of a bottle of Beefeater Gin, would stare at me with folded arms.  With his first question, I'd collapse like a folding chair at the beach into a fevered confession.  At sentencing, the judge would shut this blog down, I would lose my job and be the scourge (okay, a bigger scourge) of my local town, that would prove once and for all that my community is indeed dripping in Victorian drool.

So, I abandoned the idea of being the "Whisky Elf" of my town, having followed the logic of my above noted random thoughts.  Instead, I will continue to just write with elfin attitude, and a mind attuned to new possibilities as to how to bring more people into contact with whisky.  Whether it be a conversation with Big Bird in Central Park or me acting as a commentator of a whisky death match, just remember, I am trying to stretch and reinvent the whisky writing genre in an effort to bring more people into our little world. 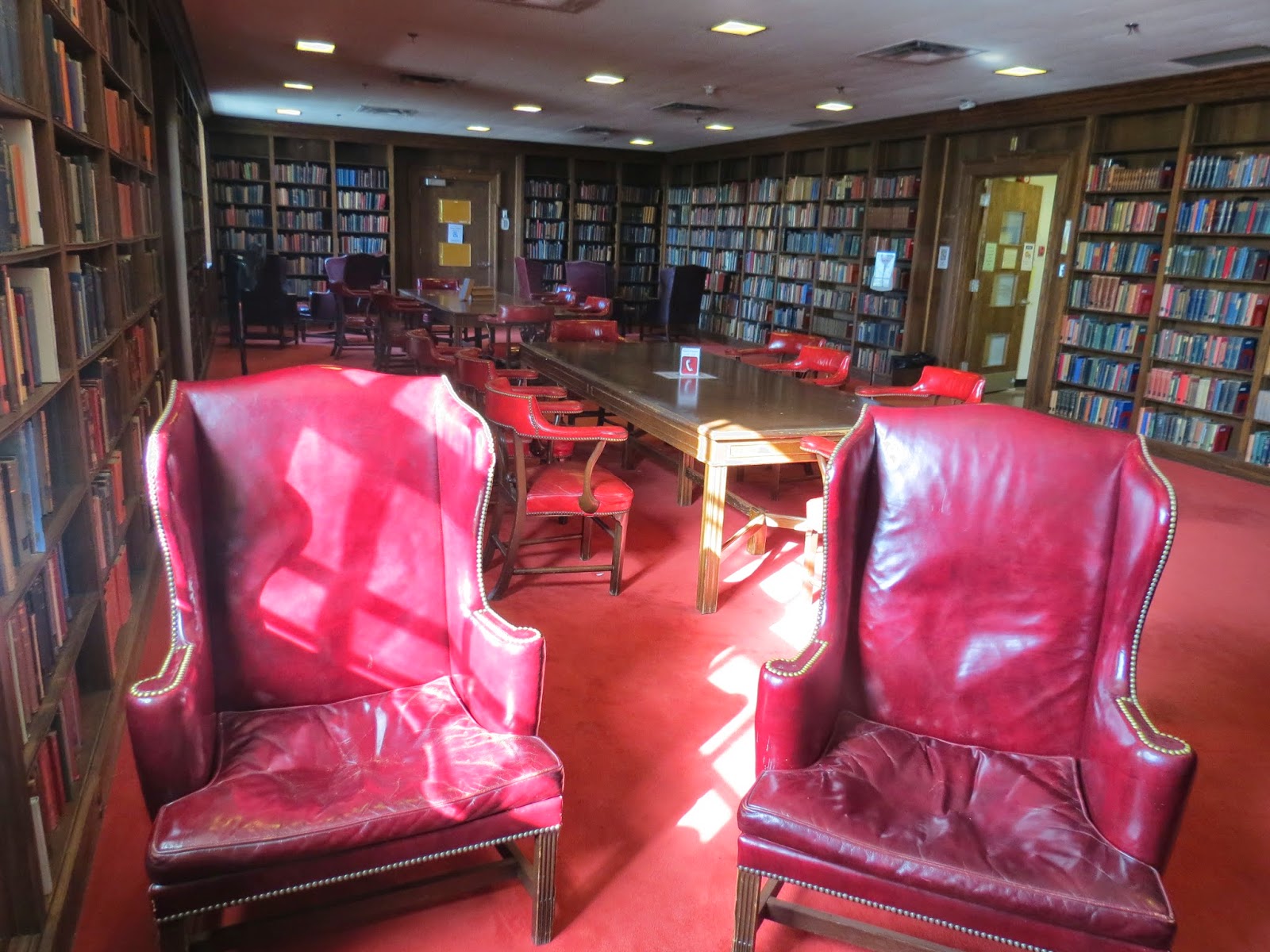 Copyright © Jason Debly, 2009-2015. All rights reserved except for photograph of the poem "Whistlers." That photograph was taken from the Poem Elf website and here is a link to that great post.  The anonymous Poem Elf holds all copyright, world rights and moral rights in that image.  I just use it here as I consider it to be significant in illustrating the subject matter, facilitating artistic/critical commentary, as it provides an immediate relevance to the reader more capably than the textual description.  I have contacted the Poem Elf for her permission to reproduce the image here.
Posted by Jason Debly at 11:27 PM