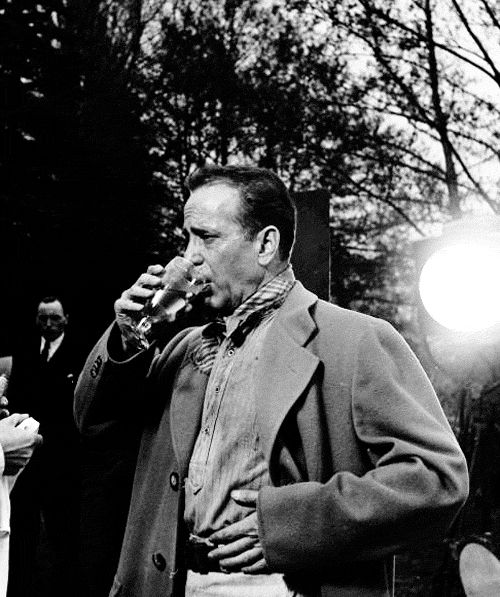 When I started drinking Scotch, I only liked what was smooth and generally sweet.  Blends were the order of the day with a couple of ice cubes.  Chivas, Famous Grouse, John Parr, Hankey Bannister and others.  I couldn't fathom  drinking Scotch with water in a ratio of 50/50 or something close to it.  My melted ice was all the dilution I wanted.  Anymore was a waste.  I had seen it in movies from the 1940's and it baffled me.  Scotch and that much water?  I tried it then and thought it was terrible.

Pictured above is Humphrey Bogart on the set of The African Queen.  A film shot in the African Congo where nearly everyone on the set got sick except for Bogie and  director John Huston.  Bogart explained their good fortune this way:

"All I ate was baked beans, canned asparagus and Scotch whisky. Whenever a fly bit Huston or me, it dropped dead."

In countless films from the 1940's Bogie is invariably in some night club or dinner club where the leading lady sings and then joins him for a drink:  Scotch and water (sometimes Scotch and soda) in a highball glass.  I was baffled how they could down that stuff. 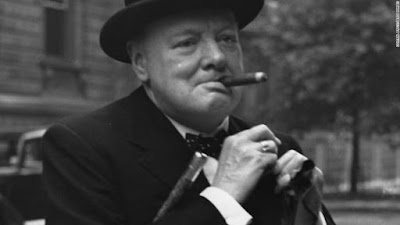 I have read a few biographies of Winston Churchill and one of them stated Mr. Churchill liked to start his morning with a splash of Johnnie Walker Red, a tiny amount and then fill a tall glass with water.  He would sip it all day.  Humphrey and Winston were no poster boys for drinking in moderation and I am not suggesting to follow their example whatsoever, but both seemed to be adherents to Scotch and water, like many people of their time.  This evening, I chose to also heed the words of Winston from his time spent in India:

"The water was not fit to drink.  To make it palatable, we had to add whisky. By diligent effort I learned to like it."

Well, I am not in 1890's India, and I suppose my tap water is potable, but I am going to mix my water with whisky and see what happens. 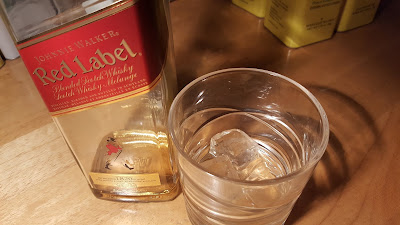 I had a heel of Johnnie Walker Red sitting on a shelf that looked forlorn amongst all the tall and distinguished single malt bottles and pricier blends.

I poured 50/50 water and Johnnie Red plus a couple ice cubes.  Let it set a moment and took a sip.

It wasn't bad.  Not great, but what I enjoyed was the cloyingly sweet notes of the Red Label was gone.  Now, it was not sweet, but rather an evergreen or spearmint bitterness that reeled me in for more sips.  The flavour was not bad.  I was doing paper work for an commerce venture that is the reason I have not been posting lately, and I found this drink was a nice companion.  Not needy like a high school girlfriend, but just a pal hanging out.

I must say that as I get older my tastes in whisky have evolved which may be contributing to my new found enjoyment of the occasional whisky and water.  I no longer value sweetness and smoothness in a whisky.  The water added to a cheap blend will take away the sweetness or other overpowering qualities and replace with a softer and even aromatic flavour profile.  I am liking this!  Maybe Bogie and Churchill had it right or maybe I am turning into an old man like them.