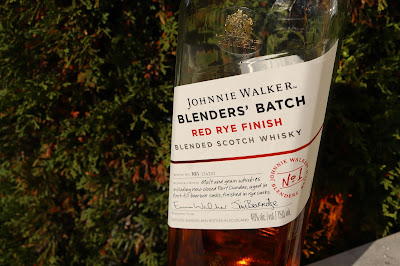 Yeah, I know it's been a while since my last post.  What can I say?  Part procrastination, and part I dunno.  Anyhow, I'm back and a big thank you to those readers who reached out to me via email since my last post in May asking if I was alright.  Don't worry, this kid is alright!  Ok, are you ready?  Let's go and check out Johnnie Walker Blenders' Batch Red Rye Finish!

Diageo, owners of the Johnnie Walker brand, are always rolling out brand extensions.  Some are a success, some are not (e.g. Explorers' Club).  Blenders' Batch is another attempt by this multinational, billion dollar plus, publicly traded company to inject some excitement and spontaneity in to their well established brand.  And, how they have done that is by taking blended Scotch spirit, aged exclusively in first-fill bourbon casks, and then 'finishing' (fancy word for transferring to another type of cask) the spirit in of all things ex-rye casks.  I must say I was intrigued.  Scotch whiskies are usually finished in port pipes, Sauternes, and even Barbaresco (a mysterious Italian red).  So, when I heard Diageo had come up with the idea of a finish in red rye casks, I was interested.  Intuitively, I thought rye casks could compliment blended Scotch spirit that had been raised in ex-bourbon casks.

Production Notes
A blend of three grain whiskies along with malt whiskies from Cardhu and the now defunct Port Dundas.  As I mentioned above, the spirit was aged in first fill bourbon casks before being finished for up to six months in ex-rye casks.

Nose
Apples, cinnamon, a floral sweetness and some caramel.

Finish
Oak, vanilla, spiciness with herbs like mint and tarragon, a wee grainy with some slight smoke. 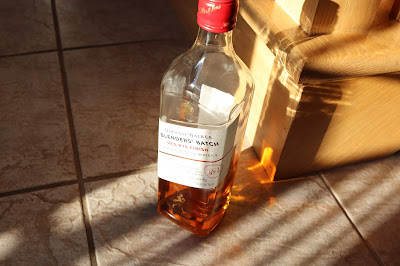 General Impressions
I was really surprised by this blend.  Frankly, quite impressed.  I particularly like the influence of the rye casks on the spirit.  The rye imparts spiced rhubarb and a dry note.  Really like this for the price.  I would imagine it would perform well in a cocktail too!

Worth a try!  I wouldn't hesitate to buy again when low on funds.

Thanks for your patience and I will endeavour to post more regularly!