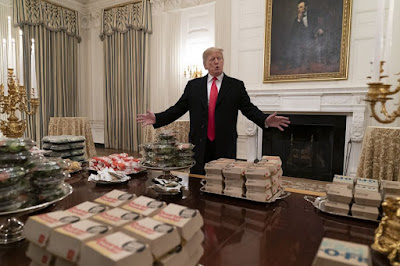 "So, get this," Roger peers closer at the two day old New York Times, as he is too vain to get glasses, and continues.  "The Clemson Tigers won the national college football championship right?"

"Yup," I say only wishing I could have watched some of it, but family and work life is very busy at this point for me or should I say unbalanced.  I envision a retirement where Saturdays are devoted to college football and Sundays to NFL.  Haven't broached that retirement vision with my Significant Other though.  Gotta have dreams, aim high they say.

"Trump fetes the team at the White House.  This is what he says: 'We ordered American fast food, paid for by me.  Lots of hamburgers, lots of pizza.'  He bought Wendys, Burger King and McDonalds!  I mean for chrissakes.  It's the White House."

"They are college students.  He's giving them what they want.  When I was 21, a burger was the centre piece of my diet."  No doubt, Roger would be thinking foie gras on a baguette with white pepper should be served to a winning football team, but this just reinforces for me that Roger and his democrats are out of touch with Main Street.   If Obama served burgers and fries the Times and the New Yorker on his rustic coffee table would have headlines celebrating such a move as in touch with college and ordinary people.  Trump does it and liberal heads explode.

"What's gonna happen after the Super Bowl?  Have Hooters or Twin Peaks cater the White House reception for the winning team?" 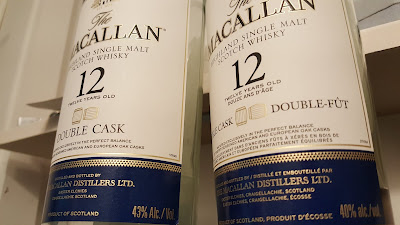 'Limousine liberal' Roger and I didn't see eye to eye on politics, but I didn't help bridge the gulf with my view that Trump is really an acolyte of Andy Kaufman, performing the greatest performance art act of all time.  Fortunately, sitting between us on his chic farmhouse coffee table that Saturday afternoon were two bottles of Macallan 12 Double Cask capable of mediating our political differences.

So, here's the deal.  In the last couple of years, I have not been a fan of The Macallan distillery because for a time they had stopped distributing in Canada age statement whiskies and had moved to a color scheme of younger, inferior but still high priced malts.  Think the NAS '1824 Series' with the Gold, Amber, Ruby and Sienna releases.  Gold was terrible and Sienna was the only impressive one of the lot, but super expensive.  Macallan also put out a 10 year old Fine Oak that was horrid and well borderline rancid.

The Macallan is owned by the Edrington Group who I think have really been suffering from a case of identity crisis.  Can't really commit fully to age statement whiskies and so release some no age statement stuff but still hold on to the old 12 year sherry wood and some age statement Fine Oak stuff.

So, I found myself at Spec's, a huge liquor retailer in Houston, in early December.  I was there for an NFL game at the generous invitation of my cousin and her husband, Greg.  Sitting on a shelf amongst all the brands preening for my attention was The Macallan 12 year old Sherry Wood.  I bought it, got it back to my cousin's house, pulled the cork poolside and had a sip.  It was boring.  A balanced, pleasant but oh so boring.  No zing, no panache, nuthin'.  Americans love Macallan.  I mean really love it.  Huge sales in the USA. 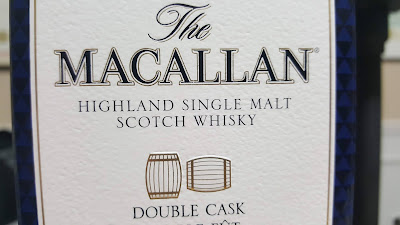 Christmas arrives in Canada and Greg, up here for a visit, gifts me a bottle of The Macallan Double Cask 12 years from Texas.  I smile, accept graciously thinking 'ahh shit this will be another super boring malt.'

But, it's not.  This Double Cask is the Clemson Tigers of the 12 year old malts.

Edrington takes new American oak and sends it to Spain.  There they build the casks.  Obviously, the newly made casks have not held bourbon.  Instead, the virgin American oak is filled with sherry for a while.  Not sure how long the sherry is in the barrel because of highly guarded proprietary secrets of Edrington, plus we are not exactly chummy, me a lowly conservative blogger and them a high minded multinational.

In any case, the sherry is eventually emptied out and the casks are shipped to Speyside.  At the distillery, in goes Macallan spirit.  Thereafter, These seasoned sherry casks now holding Macallan spirit are blended with other Macallan spirit that aged in their traditional European oak.  What you end up with then is a malt aged partly in American oak and then European.  Hence, double cask.  Let's have a taste friend:

Nose (undiluted)
Sherry for sure, but its rich, high quality, red fruit, and then the oak and vanilla.

Palate (undiluted)
Nice balance between sherry and oak; the oak is unique and complex.  Spices of thyme and tarragon come to mind.  High quality oak for sure.  Creamy notes too.  English cream follows the sherried entry onto the palate.  Not as sherried as the sherry oak 12 years.

General Impressions
This is really good!  It has restored my faith in the brand.  So excited was I upon discovering this fine malt, I went to my local liquor emporium in Canada and bought two more bottles.  One night I open one of those and have a dram and to my dismay it is toned down, flatter, thinner, and much less complex.  What has happened?  I am baffled. Looking at the bottle bought in Canada I see it is bottled at 40% whereas the American release is at 43% and that in my opinion makes a big difference.  Look closely at my photo above of the two bottles and notice the differing ABVs.  Why the discrepancy?  An industry insider says bottling ABV levels are according to regional tastes.  Another insider says its all about taxes.  Some regions tax higher ABVs higher.  So, those high tax regions sometimes get lower ABV malts to keep the price a little less.

I hold the American bottle up to Roger as proof Trump may indeed be making America great again!