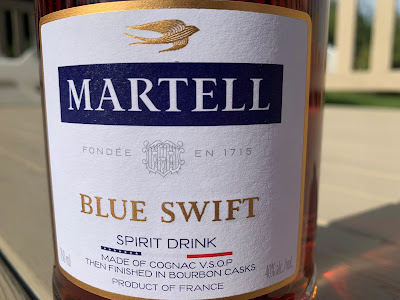 Martell is a very old and well established Cognac producer, dating back to 1715.  This producer is famous for a number of offerings.  I am a fan of their Cordon Bleu.  Nice stuff.

In April 2018, Martell 'Blue Swift' was launched.  It's a bit of a departure from what this cognac house has produced in the past because the 'Blue Swift' is not technically a cognac.  While the spirit is made up exclusively of VSOP cognacs, they are aged further, or what we call 'finished' for a couple of months in ex-bourbon casks from Kentucky.  We don't know the distillery that the sourced casks are from either.

French law governing cognac requires that the spirit be aged exclusively in French oak, and because Blue Swift has additional aging in ex-bourbon casks, Martell cannot market it as cognac.  Accordingly, on the label, the words 'Spirit Drink' appear.

Ok, enough said.  Let's move on to the review.

Age Statement
None, but as it is made up of exclusively VSOP cognacs, we can say that there is no spirit less than 4 years of age.  May not sound like much in the whisky world, but in the realm of cognac, 4yrs denotes quality.

Palate
Sweet arrival of apple cider, creme brûlée's, oak, ginger and a lot of vanilla.  Too much!

General Impressions
When I first opened this bottle, the Blue Swift tasted pretty awful.  The caramel flavour tasted artificial and burnt.  Just dreadful.  But, two weeks or so later, having gotten some oxidation going on as the bottle was now opened, it improved in taste.  The improvement was to something that is tolerable, but that over-the-top vanilla and oak was still there while the artificial caramel notes had settled down.  I am still not a fan, and would not recommend this spirit drink.

When I consider the price point of $100 in Canada and $60 in the US, I don't think it delivers value for money.  It probably works as a base of a cocktail, but again its expensive mix.  This spirit is not well suited to sip on its own.