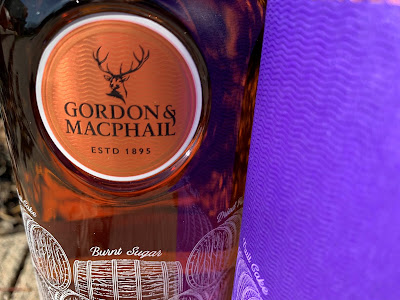 Lately, I have been sampling quite a few single malts from independent bottlers.  Why?  The answer is simple.  They offer an opportunity to try single malts from obscure distilleries that often end up in famous blended Scotch whiskies.  The range of flavour profiles is astounding and the chances of discovering a diamond in the rough for a fraction of the price of a similar quality malt released by the big multinational drinks companies is pretty good too!

Independent bottlers just seem to be hitting it out of the ballpark for me as of late.  Because they typically do not own a distillery, they buy the new make spirit that is excess or unwanted by distilleries.  Sometimes these spirits have a flaw or are a bit off in terms of the house style of a distillery and so they find a home with the independent bottler.  These bottlers are generally old firms that have a huge inventory of casks in all shapes and sizes, and experienced staff who sample the spirit regularly till its deemed ready to bottle.  Expert wood management coupled with the right amount of aging and good judgment can transform an otherwise mediocre spirit into a thing of beauty.

What I have before me is a bottle from the independent bottler Gordon & MacPhail.  While they do own a distillery (Benromach), the bottle before me is not from there.  They have purchased some spirit from a little known distillery, Miltonduff.

Miltonduff is a Speyside distillery that has been in operation since the early 19th century.  Today, it produces about 4 million litres a year and most of the production is destined for eventual inclusion as the malt whisky component of the well-known, blended Scotch, Ballantine's Finest, which by the way, I absolutely despise.   Ballantine's flavor profile can be summarized as Alpenweiss box wine, Fresca and black pepper, suitable as windshield washer fluid only.  If I had known this tidbit of how Miltonduff is used, I probably would not have picked up this G&M release.  But, such is fate.  Sometimes we make decisions (career, marriage, purchase a Mercedes, etc.) without being fully informed. 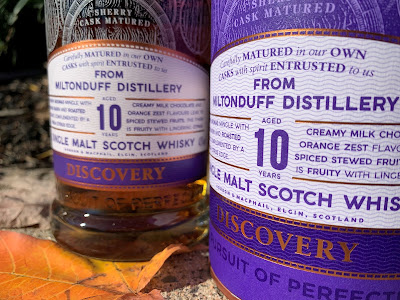 Gordon & MacPhail have several different 'ranges' of releases.  Some expensive and rare and others not.  I opt for the latter.  The Miltonduff 10 year old is from the Discovery range.  The aim of this range is to serve as an introduction to the portfolio of classic Scotch flavor profiles:  'sherry', 'smoky' and 'bourbon.'  Our little ol' bottle of Miltonduff is the 'sherry' representative.  I am surprised as Ballantine's Finest is not a sherried dram.  But, then I remember in such a blend Miltonduff is one of a great many single malts, and who knows the proportion of malt.  Miltonduff might be only added in relatively small amounts to the blend in comparison with other single malts.

Chill-filtration?
Yes.  I confirmed this with Mr. Bill Somerville, Brand Ambassador for Gordon & MacPhail in Canada. 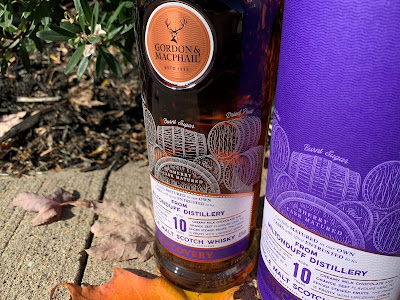 General Impressions
This is good!  The price is not cheap, but I have absolutely no buyer's remorse.

This bottle exhibits impressive complexity when you first open the bottle.  However, once the bottle has been open a while, the oxidation makes it more sherried and less complex.  Still a good dram for sure, just not as complex.

While the youngest whisky in the bottle is a mere ten years, it certainly seems to have others that are far older.  Gordon & MacPhail have accomplished what they set out to do, namely present a classic sherried Speysider.  Frankly, I prefer this release to its peers: Glenfarclas 12 and GlenDronach.  It might be a little less refined than say Macallan 12, but I really need to do a side-by-side to decide.  If you like sherry bombs with interesting nuances, you will love Miltonduff 10 years.  Highly recommended!