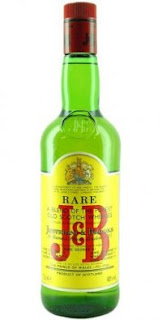 I was at a wedding reception this evening and standing at the bar asked for scotch.

"Sure" replied the college kid. "I've got scotch" he bellowed over the din of people talking before the bride and groom arrived in the ballroom.

"What kind?" I asked, fearful of the response.

"Dunno, lemme check" the pimply kid replied, as I recoiled at the thought of what he might produce for a bottle.

He held up a bottle of J&B Rare. Never had it before, but thought I would give it a try.

"You want that with ice or pop?"

"Neat will be fine" I answered.

J&B Rare
"J&B" are the initials for "Justerini and Brooks." Giacomo Justerini was the original founder and Alfred Brooks bought the entire business in 1831. Royal warrants issued by the British Royal Family served as confirmation that this blended scotch was regularly supplied to the royal court.

Bearing in mind this level of wide spread popularity, I sat down at my table and tried a sip.

Finish
A little pepper, slight salty tang, a little tingle of the nostrils as the peat disappears very quickly leaving a pepper and sweetness on the palate. Not a great finish. This blended scotch flavor disappeared from the palate as quickly as it appearred.

General Impressions
For a blended scotch whisky that has been around for so long and having impressive worldwide sales, I was frankly expecting a lot more. This scotch is in direct competition with other economy blends like Johhnie Walker Red Label, Ballantines, Teachers Highland Cream and others. I would pick its competition over it everytime.

Why? Well, let me count the ways: Sickly sweet, cloying, no complexity. Adding water didn't help things. While it was a tad more malty with water, I also detected graphite on the palate much like putting a lead pencil to my lips. Not pleasant.

The bottom line is: I don't like this. Too sweet! Simple, no complexity of flavor, no smoke, in a word "boring." It's like drinking several packets of Sugar Twin and Splenda mixed with alcohol and a cinnamon stick.

I visited the J&B Rare website. The website has the logo "Start a Party." And that is appropriate. This is a party drink to be used as a mixer. I suspect with soda, this could become a refreshing drink. The site recommends mixing with ginger ale or cola. I am sure taking such action would result in a decent party drink. Disguise that scotch with some pop and you have something you can down pleasantly and get intoxicated on quickly. For those of us who enjoy our scotch on the rocks, a little water or neat, we should pass on this.

By the way, at the wedding, a waiter, attempting to keep the tables free of dirty glasses and dishes, scooped up my partially finished glass of J & B Rare, probably thinking it was just the remnants of a full glass of gingerale. Normally, I would have strenuously objected, but in this case, I just smiled at my good fortune. I knew my little sample of J&B would soon find an appropriate final resting spot, as it is poured down the drain.