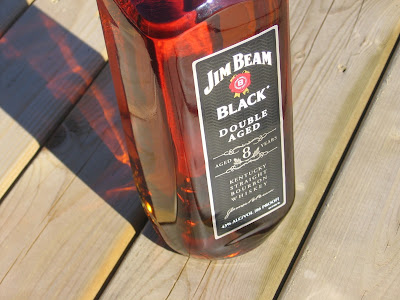 Bourbon
Bourbon is a classic American whisky. A spirit with a poorly recorded past, but the general consensus is that it was originally distilled in and around the county of Bourbon, in the state of Kentucky, during the 18th century. The Jim Beam brand can trace its existence back to the earliest beginnings of bourbon.

Composition
Barley malt, corn and rye grains, in varying proportions, are mixed together with Kentucky water to produce a “mash.” You will note on many bourbon bottles, “sour mash” and this refers to the the mash of a previously distilled batch being added to a new one. The distillation process is fairly complicated, and I will stop at this point because I do not pretend to fully understand it, nor do I want to lose you, the reader. 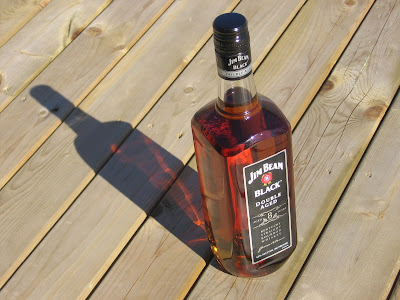 Charred Oak Barrels
Bourbon is aged in charred oak barrels. When I say “charred” I mean these barrels were subjected to flames! The spirit is clear when it goes in the barrels, but during the aging process acquires its amber color from the barrels and more importantly that wonderful charcoal flavor.

In any event, that’s enough chit-chat, let’s turn to the matter at hand. What does the widely available Jim Beam Black taste like?

Nose
Delicate, slightly floral, more oak and lots of vanilla. Maybe a little charcoal too. Impressive. Not what I expected from a bourbon.

Palate (undiluted)
The palate fulfils the promise made by the nose. Initial mild sweetness that I had difficulty putting my finger on. Eventually, I figured it might be corn or rye flavor, but still not sure. What I am sure of is that it’s damn nice. Anyhow, following entry to the palate, the flavor moves to big, soaring oak, followed by, at the mid-palate point, wonderful, tremendous cleansing wafts of charcoal. The charcoal flavor is fantastic! Very cleansing! Last but not least, tsunami waves of vanilla wash across the palate.

Finish
Short to medium finish begins with a sweet burn of cinnamon and candy cane, after which it moves onto a grand finale of charcoal and vanilla, fading like embers of a late night campfire. It’s nice.

What is such a pleasure about drinking bourbon is that sweet charcoal flavor that you will never find in scotch. No nasty bite, heat or aftertaste. Lingering vanilla, oak and charcoal woven carefully like a hand rolled cigar. Very, very nice! 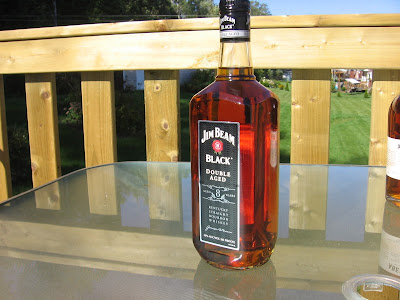 General Impressions
I like this! It’s pleasant, easy-going, not pretentious. I keep thinking about the charcoal flavor. It’s perfect. I really enjoy drinking this straight. I tried it with ice, but did not notice any improvement. If anything, the addition of ice degraded the flavors.

This is so easy-going that people who generally take a little ice or water with their whisky should consider trying this one ‘neat.’ If I were salmon fishing, overlooking a brook in an Adirondack chair with a friend, I would be sipping Jim Beam Black. An unpretentious whisky that compliments a memorable moment of kicking back.

This is a "premium" bourbon due to the lengthy (8 yrs is a lot for bourbon!) aging process. Accordingly, it is not surprising that this is superior to the entry level bourbon offered by Jim Beam, the "White" label. The difference in price is a mere $8 to $10, but what a world of difference. Well worth the few extra dollars. Don't be cheap! Spend a few extra dollars and get a drink that you will still be thinking about days later.

I guess the only criticism that could be voiced (not by me) is that it is not very complex. The presentation of the principal flavors (oak, charcoal and vanilla) is rather straight forward. I can understand how one might raise this criticism, but we are not sipping scotch, we tasting bourbon. Bourbon, by its nature is does not need to have a complex flavor profile in the same tradition of scotch. Why? Because it is bourbon. Bourbon can get a way without such a requirement, but if it is not complex, it better be damn pleasing to the palate. Jim Beam Black is very pleasing. I am not saying bourbon cannot have a complex flavor profile. There are some high end bourbons (ie. Woodford Reserve), but the fact that Jim Beam Black is not, cannot be regarded as a flaw, especially given its reasonable price point.

While I might concede the presentation of flavors is “straight forward” as mentioned above, I would add that the presentation is very elegant and sophisticated, without being over the top (ie. Woodford Reserve).

Jim Beam Black is aged for eight years and I think that makes a big difference. Bourbon aged less than that amount of time tends to have excessive heat, bite and roughness. Jim Beam Black is a classy bourbon that is sure to impress your whisky fan friends!  However, Jim Beam Black exported outside the United States is not aged 8 years, but rather 6 years.  I notice some difference in the quality of the bourbon.  While it is good, it is not as good as the 8 year old bottling only available in the United States.  This will explain why Jim Black bottles outside the US do not have any age statement on the label.