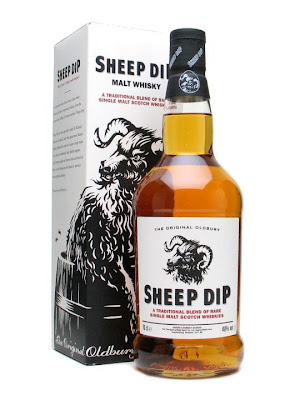 A key marketing task of every drinks company that owns a distillery is to 'discover' a quaint story that can somehow be related to their whisky wares.  Some companies do this very well.  The little story behind Wild Turkey is a prime example.  Other 'tales' are pretty weak like Diageo's suggestion that Johnnie Walker Gold Label is made up of a single malt (Clynelish) composed of water drawn from springs that run through veins of gold, hence: "Gold Label."

The Spencerfield Spirit Company have come up with a charming tale of their own to associate with one of their scotch whiskies.  Settle down in that wing back, red leather, upholstered chair of mine, warm yourself by the fireplace, as it is story time:

A long time ago, way back to 1830, a George Wilson, developed an arsenic powder that when mixed with water was a great solution to dip sheep into for the purposes of ridding the creatures of pesky mites, ticks and lice.  The sheep were run through a trough of this nasty solution.  I am not so sure the depiction on the box for this whisky is accurate.  I would imagine it would be pretty hard to plunge sheep into a barrel. 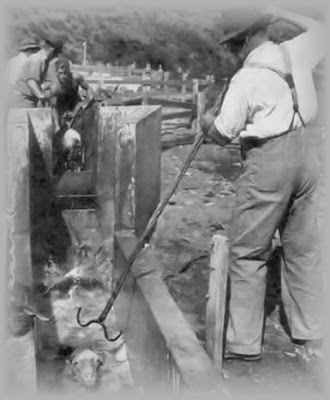 If you visit the Spencerfield Spirit Company website (click here) and click on Sheep Dip for product information, they will mention that Scottish farmers were in the habit of marking their barrels of whisky as "Sheep Dip" in order to avoid paying taxes on it.  I guess barrels of sheep dip did not attract taxation, and the tax man was not going to taste the barrel to confirm it was sheep dip.  A drinks company takes a really big risk drawing any comparison between their whisky and a liquid insecticide, but hey, it's a free world.  If the whisky is bad the jokes abound . . .

So, is Sheep Dip any good?  It's a blended malt meaning no grain whiskies present.  Specifically, a blend of single malts aged 8 to 12 years.  Those single malts are sourced from the four major whisky producing regions of Scotland:  Speyside, Islay, Highlands & Islands and Lowlands.  The master blender is Richard Patterson, a fellow of well earned respect in the industry.  So, is it any good?  Or is tantamount to drinking liquid pesticide?

Finish (undiluted)
A little drying malt while the sherry gathers strength and a fine line of sea salt and pepper tang at the very end.

General Impressions
I enjoyed this blended malt.  Very friendly, slightly warming.  It would make an excellent starter scotch for someone who wants to explore this type of spirit for the first time.  It is also a nice graduation from blended scotch.  Want an affordable gift for the holidays?  Sheep Dip works.  It is reasonably priced.  Criticisms?  Virtually no peat in the flavor profile.  Flavor profile is not complex.  This is comfort scotch.

I stumbled on this through trading emails and chats with one of this site's readers, Adam Morin.  Adam has been working his way through this bottle and inspired me to pick one up.  Below is Adam's review:

Nose (undiluted)
Nothing whatsoever to write home about. A slight grassy graininess, tempered by the richness you'd expect from a malt comprised of sixteen single malts. Grass, shrubbery, um, juniper bushes. That's it.


Palate (undiluted)
A little more exotic. Ginger/clementine notes dominate what is a surprisingly light-bodied entry. You get the richness of single malts with none of the flavour differentiation. O Boy. It claims to use sixteen different single malts from the four distilling regions of Scotland, but there isn't the slightest hint of peat anywhere. Maybe R. Patterson used a Bunnahabhain, or a Cambeltown malt. Sugary, malted Speyside notes form the dominant palate expression here.


Finish (undliluted)
Not dry in the least. You can tell both bourbon and sherry casks are at work here, but it's hard to identify exactly which is which. The wetness of finish suggest a premium given to sherry aging, but as to the exact identities of each single malt, I'm in the dark.


Conclusions
Not dissatisfying, in the least - but light, airy, grassy and frankly inconsequential. If given sixteen single malts to play around with to my heart's content, even I could come up with something weightier than this. That said - the kind of milk chocolate flavour you get with blends is entirely absent, so Richard Patterson is true to his word. But it seems rather like he vatted the sixteen most inexpensive malts he could lay hands on, in an attempt to create something greater than the sum of its parts. You read every review of this stuff, including Jim Murray's, and they all say the same thing - "grassy". It tastes like a "freshly mown lawn". Well, Jim, that's fantastic. I could consume my lawn mower's shavings for a fraction of the price. Tell me something I don't know. Orange marmalade and ginger is something that is clear. There is also a clear cinnamon spiciness, which is not at all unwelcome.

Adam has astutely pointed out that for a whisky that purports to draw single malts from all of the four major regions of Scotland, it sure doesn't taste like it did so.  For me and Adam, it is a big Speyside flavor profile with hardly any peat or smoke.  I would say there is no Islay presence at all in this dram.  It is better than Strathisla 12 years.  While the flavor profile is not very similar to Glenfiddich 12 yrs, I still prefer Sheep Dip.  So, that is saying quite a bit for this blended malt.  It is not every day that a blended malt trumps a few 12 year old single malts.  To put it in more perspective, this tastes like a young Glenfiddich 15yrs Solera or flatter Johnnie Walker Green.  Nevertheless, it is most enjoyable for the price if you are a big Speyside fan.  I recommmend it!  As for Adam, he is less enthusiastic.  He thinks it's just ok.