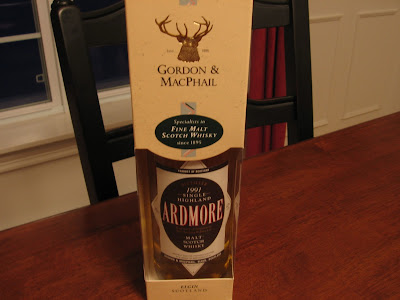 If you have read some of my other reviews, you probably have noted that I am a big fan of the economy blended scotch, Teacher's Highland Cream.  It is ridiculously cheap to buy, but packs a nice punch of flavor.  Lots of bacon, smoked oyster and anise flavors.  Maybe on the nose kinda like sniffing diesel fuel, but when it hits the palate, it redeems itself.  I am not saying Teacher's is the greatest blend, but I am saying it is one of the greatest economy blends, that is at the price you pay.  More on price later in this post . . .

One of the core single malts making up Teacher's is Ardmore, an eastern Highland malt that is heavily peated.  The peaty nature of Ardmore is quite a departure from other eastern Highland malts (ie. GlenDronach) and frankly malts from the rest of the Highlands.  Big peat fires were used to dry the barley and it is readily apparent on the nose before you even sip. 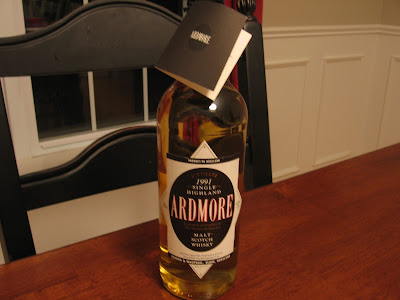 Nose
Lush peat, lemony and the scent of a heavy summer rainfall as you sit by the window.  The aromas of this malt really are very expansive, but not overpowering.

Palate
Sweet peat, lush texture, oily and of course smokey.  The smoke is recognizable for anyone familiar with Teacher's.  Mid to late palate is greeted by a lot of ginger and some oak.

Finish
You are left with lingering flavors of salt, brine, more smoke and that ginger. 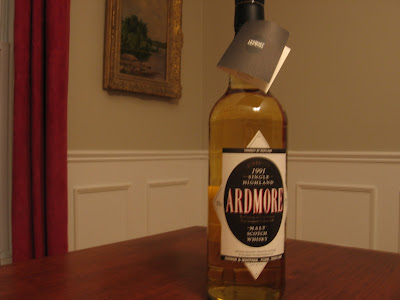 General Impressions
Tastes like ex-bourbon casks were used in the aging of this malt, though I cannot say for sure, as I have not been in contact with the distiller.  However, what I can say for sure is that there is a total absence of sherry flavors in this single malt.  In a nutshell, the flavor profile is peat, smoke and ginger.  A lot of ginger in the mid to late palate that moves onto the finish.  I find the ginger a little too much.

There are other flavors present like black licorice (think ouzo or arak).  This licorice flavor is echoed in the Teacher's bottling along with that signature Ardmore smoke. 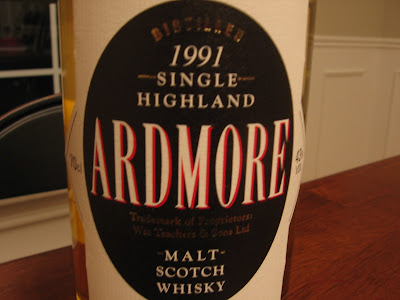 My opportunity cost with respect to Gordon & MacPhail's Ardmore is what I might have done with the $70 if I had not bought this particular bottle, and that is what stings for me.  I could have had a bottle of Talisker 10 for $8 less!  Glenfiddich 15 yrs was $13 cheaper!  And the killer!  Glenlivet 18 yrs for $2 cheaper!

The price point of the Gordon & MacPhail bottling of Ardmore will vary depending on where you live of course.  But, in general, I suspect that it is higher than you should pay.  Ardmore distillery also has it's own releases that are more reasonably priced.  Check 'em out.

Ardmore is a pleasant enough single malt, but it is not stellar and therefore Gordon & MacPhail should  price it accordingly.  If you can buy Ardmore either from this independent bottler (Gordon & MacPhail) or from the distillery (they have a few bottlings) at say $35 US, then there is no problem.  The trouble with the bottle I picked up was the price.  Tamdhu and Aberfeldy 12 years are priced a lot lower, but of similar quality.  So, I guess what I am saying is you need to get Ardmore at the right price.  If so, then everything is ok.

I know I tend to obsess about the price of scotch, but hey, like you, I am paying for it out of my own pocket and I want value!  Not getting it here at $70 a bottle.  The 1991 Ardmore is smooth, inoffensive, pleasant enough, but lacking the complexity and wow factor to justify the price that Gordon & MacPhail demand.  For that reason, I cannot recommend this particular bottling at this high price.  Ardmore is a pleasant single malt, but you have to get it at the right price.  That did not happen here.

Email ThisBlogThis!Share to TwitterShare to FacebookShare to Pinterest
Labels: Ardmore