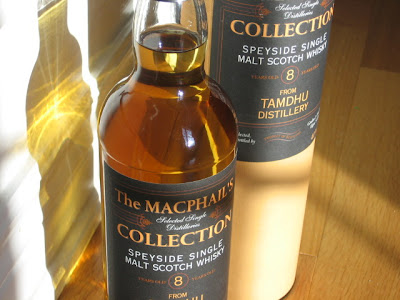 In the past, the Tamdhu Distillery, in the town of Knockando, always produced what I found to be a gentle and pleasing introduction to single malt scotch.  A great starting point and for that matter, always enjoyable to return to every once in a while.

The house style if you will is invariably smooth and easy-going.  No over powering flavors and usually a rounded, soft mouth feel.   Unfortunately, this old Speyside distillery (founded in 1897) was closed by its owner, The Edrington Group, in April 2010.  Reasons are invariably vague.  The Edrington spokespeople blamed the weak economy at the time and the need to "rebalance its distillation capacity."  For further Orwellian double talk akin to a White House press secretary, more Edrington quotes are available in a news article on the closure of Tamdhu by clicking here.  The bottom line I figure is its all about saving dollars and cents (and sacking 30 hard working people). 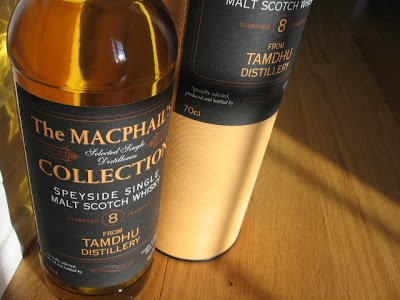 When the Tamdhu distillery was in operation, its output was an ingredient whisky for a number of unremarkable entry level scotch blends like: Famous Grouse, J & B Rare and Cutty Sark.  The distillery cranked out a vast sea of 4 million gallons a year.  The majority went for blending, but the distillery did bottle some single malt, usually with no age statement, but later there was a ten year old.  Tamdhu was never a darling of the whisky critics.  Lacked the magic they required in their drams (or maybe their pocket books . . .).  But, for the average Joe, Sue and myself, it hit all the right notes.  Smooth, pleasing and friendly. 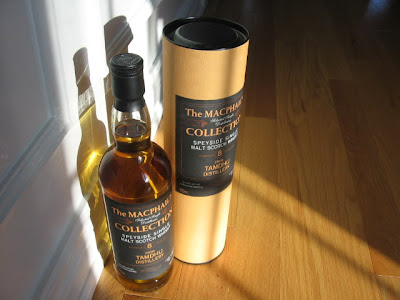 Today, you can probably find Tamdhu single malt scotch still on shelves, but it won't likely be distillery bottlings.   There are still some bottles kicking around (because so much was produced), but more than likely what is on the liquor store shelf comes from an independent bottler like Gordon & MacPhail.

Independent bottlers buy a 'new-make spirit' (unaged whisky) produced by a Scottish distillery and make decisions about how to age it.  Decisions concerning what casks (American or European Oak), first-fill sherry or ex-bourbon casks, second-fill, etc and of course aging.  "Wood management" is, in my opinion, just as important, and sometimes more important than the quality of the new-make whisky.  A good independent bottler like Gordon & MacPhail can take the unremarkable new-make whisky of a distillery like Tamdhu and make it into something special if they exercise good wood management.

Nose (undiluted)
Surprisingly soft mist of peat, rich sherry, lots of spices and vanilla.  Quite impressive for the price of this malt.

Palate (undiluted)
Sherry, some cranberry and raspberry.  Lots of other rich red fruits too. 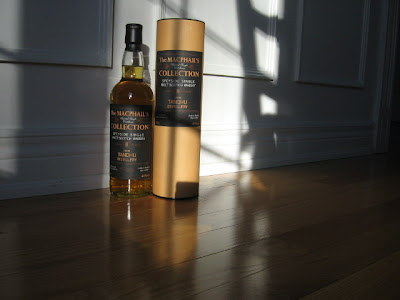 General Impressions
I am really impressed with this single malt.  I mean really impressed.  For a malt that is made up of whiskies as young as eight years, it tastes like the majority of the spirit is much older.  Then again the nature of the new make whisky may mature much earlier (ie. 8-10yrs) than others.  In any case, this bottle is proof again that age statements do not necessarily denote quality.

Gordon & MacPhail have done an excellent job of wood management with the Tamdhu new-make whisky they received at least 8 years ago.  Excellent quality refill sherry casks were used to age the spirit.  I know this because I can taste it.  The refill sherry casks may have not necessarily been 1st refill, but rather 2nd or some combination of the two.  Whatever the case is, the master blender did a terrific job given the price of a bottle of this release.

Criticisms?  At this particular price point, not really.  Gordon & MacPhail deliver an easy drinking single malt with pleasant sherry and red fruit flavors that slightly dry on the finish.  Maybe not overly complex, but this is not meant to be a show stopper or one to drink while you ponder the meaning of life, you ol' soldier of the mind.  Hell no!  This is a malt for when you need to chill out in the backyard and watch the sunset.  This scotch will also work well when you and a buddy debate NFL stats and whether or not the Patriots will make it to the Super Bowl.


I have always felt that Tamdhu never really had a place in the sun to borrow the title of the magnificent film starring the actress Elizabeth Taylor who sadly died today.


Copyright © Jason Debly, 2009-2011. All rights reserved.  The writer owns no copyright to the picture of Elizabeth Taylor as she appeared in the 1951 film, A Place in the Sun.  The film and still frames are the copyright of Paramount Pictures.  The picture from the film is posted for the purposes of nostalgia, education and entertainment.
Posted by Jason Debly at 5:27 PM

Email ThisBlogThis!Share to TwitterShare to FacebookShare to Pinterest
Labels: Tamdhu