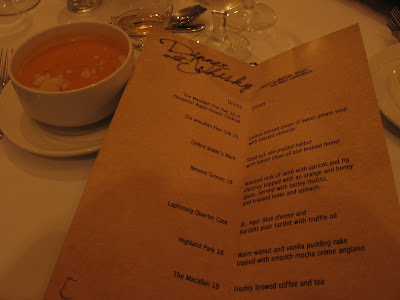 The appreciation of whisky does not have to be a solitary experience with a Glencairn glass or a tumbler at night in your book lined study.  Whisky can be paired with food and enjoyed with a crowd, resulting in a most pleasing experience.  The trick of course is to make the right food pairing.
The 2011 New Brunswick Spirits Festival started for me with a dinner on a Wednesday evening at the Fredericton Delta Hotel.  The hotel chef worked with whisky critic, Martine Nouet, to bring to life the recipes she sent him from Islay (her current home).  It was at times frustrating for the chef who strained to decipher the peculiar recipes supplied by Martine and revised via long distance phone calls in her heavily accented English.  The chef's frustration though was well worth the price of admission.   Read the menu pictured above by clicking on it.  The food and the whisky was fantastic! 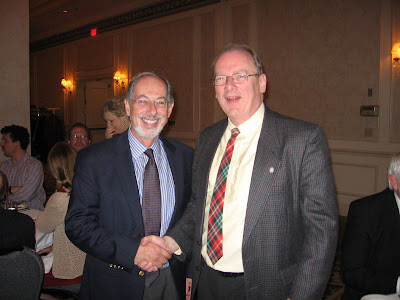 Initially, I was thinking to myself that this meal is very expensive and I cannot fully appreciate the whiskies because of the food.  I was getting too caught up in the feeling that I was missing some profound nuance of the whiskies being featured.  I was brought back to earth by an astute observation from a friend (pictured above on the right) who pointed out that a whisky dinner and the festival for that matter are more about mixing with people than the whisky itself.  Of course the whisky is a focal point, but it's not the only one.  Just as people make a workplace great or not, so do people at an event like the N.B. Spirits Festival.  So, should one engage in the cold cost benefit analysis whereby one thinks "for that amount of money I could have had a couple of great bottles added to my collection?"  No!  Banish such thoughts from your malted mind.  Whisky festivals are, first and foremost, about people. 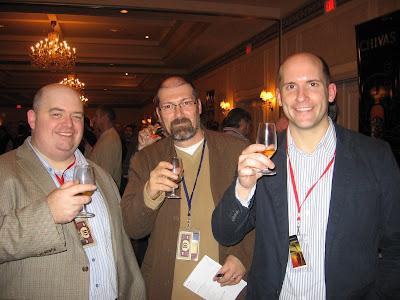 Pictured above were some fellow scotch nuts that I hung out with at the event.  We tried a number of scotch whiskies.  Some great and some not so great. 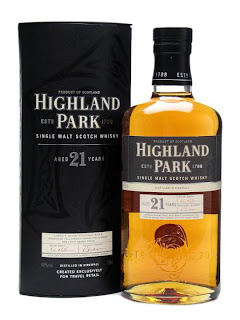 Highland Park 21 years
A very good malt that was quite powerful.  Wood spice, cardamon, leather and dark cherry.  A little sip goes a very long way.  A finish that went on for minutes.  Wow!  The only aspect of this single malt that none of us enjoyed was the price: $280 a bottle!

The Macallan 18 years Sherry Oak
Some whisky festival participants use the event as an opportunity to try new whiskies that they have never had before.  Me?  Not necessarily so.  I always make an exception for the Macallan 18 years Sherry Oak.  On this evening it was a little underwhelming.  I found it too smooth, and not terribly complex, as it should be given the price point.  Nevertheless, it disappeared from my glass mighty quick.  The Macallan 18 years has lately been less complex than I recall in years passed.  Accordingly, as much as this whisky has a special place in my heart, I am only buying it when on sale at a steep discount.

Ardmore Traditional Cask
Ardmore, as you probably know, is one of the core single malts composing the great economy blended scotch: Teacher's Highland Cream.  I like Teacher's a lot.  Unfortunately, the motley crew I was hanging with were less impressed.  They're just wrong.  In any case, I thought it would be fun to try the single malt, Ardmore, and it did not disappoint.  A malty, chocolate-like whisky that did not let us down.  Maybe a little smoother than expected and not overly complex, but at the price point of $41 I was not complaining.  I would not hesitate to buy this one.  If you like Teacher's, you will love Ardmore. 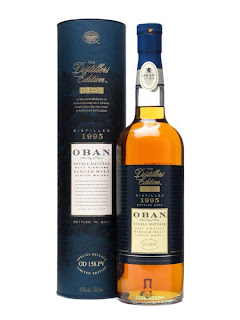 Oban Distiller's Edition
This malt was good, but the consensus amongst the posse I was riding with was that the standard bottling of Oban was better.  The experience brings to mind the consistent opinion I hold on all 'distiller's edition" regardless of the distillery:  Don't think for a second that a distiller's edition is necessarily better than a standard bottling.  It is just different.  Not better.  Just different.  Try to remember that when you have this or any DE in your hand and weighing the decision of whether or not to plunk down the extra money.  Our observations of a Talisker Distiller's edition were the same too. 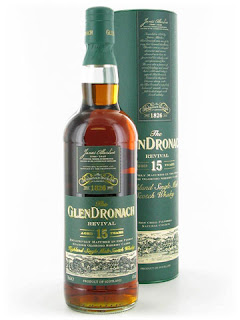 Glendronach 15 year old Revival
We tasted a few other whiskies that were not so good, but we were all very impressed and surprised by GlenDronach 15 years.  A concentrated punch of juicy red fruits and berries, sherry, toffee and wood smoke.  We all really liked this one, placing it second to Highland Park 21.  Go buy the GlenDronach 15 if you like a sherried whisky.  Tastes much older than 15 years.  Probably the best whisky of its class and even the 18 year olds this year!  Highly recommended! 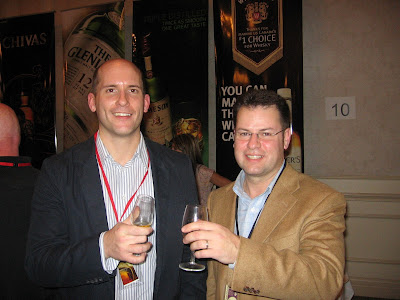 Conclusion
What I took away from the evening is this:  whiskies over 18 years are not necessarily better.  Just different.  Same goes for Distiller's Editions.  Matter of fact, human nature being what it is, we generally prefer familiarity (ie. standard bottlings of say Talisker or Oban) as opposed to exotic distiller's editions.  They tend to be a little out of balance (ie. over-oaked or too much of another taste depending on what the spirit was finished in).  As the Master Blender attempts to make something great, he also runs the risk of over-doing it.  And Finally:  Good friends sharing a dram with you make any bad dram you encounter, not so bad after all!


Copyright © Jason Debly, 2009-2011. All rights reserved. Any and all use is prohibited without permission.
Posted by Jason Debly at 11:18 PM