Let's say I have the opportunity to jam with B.B. King on some blues classics. And let's go further and say Mr. King will graciously play rhythm guitar and while I lay down some lead with my trusty axe.  The notes I hit have to be within the framework or the accepted scales (ie. 12-bar blues) or conventions of blues music.  Otherwise, the jam session will not be a blues jam, just a cacophonous disaster similar to the sounds of flying metal of a Russian satellite hurtling towards earth or Judge Judy chewing out a poor, hapless litigant.  Of course, I can take some chances and toss in some flamenco or maybe bluegrass, but I can't deviate too far.

For example, I cannot, midway through The Thrill Is Gone launch into chunks of a Randy Rhoad's guitar solo taken from his spellbinding performance of Suicide Solution with Ozzy Osbourne.

I just can't do that!  I have too much respect for Mr. King (and the memory  of the late Mr. Rhoads) and besides, the Blues jam would be ruined.

I'm all for innovation, but hey, ya gotta work within a certain framework or paradigm (I can't believe I just uttered that pretentious word).  If you completely disregard your context, you may succeed (very remote chance) or fail miserably (sadly more than likely).

Crown Royal (click here for my review) is a towering classic Canadian whisky.  Enormously popular in Canada, the US and UK for its light, delicate fruit, vanilla, slight oak and a zing of rye that is smooth and satisfying to the casual drinker and the whisky nut.  A classic right?  So, why mess with a classic?  Well, if you are multinational company like Diageo (owner of the brand), you are always looking for ways to make more money.  Hence, product line extensions.

Currently, there are six brand variations available: Crown Royal Deluxe (standard bottling); Crown Royal Black; Crown Royal Limited Edition; Crown Royal Reserve; Cask 16; and Crown Royal XR.  Obviously there is money in extending a brand line.  Just ask the suits that own the Famous Grouse brand.  Trouble is . . . you have to make every new edition a little different, innovative, but not to the point that you disconnect from the conventions of your beverage that put you on the map in the first place.  Kinda like my imaginary jam session with B.B. King. 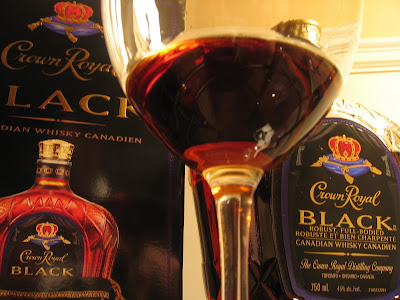 Crown Royal Black is the latest extension of the product line.  Introduced in April 2010 in the United States.

The concept behind Crown Royal Black is to deliver a robust, full-bodied Canadian whisky with heavy helpings of oak, higher strength (90 proof) and bourbon notes.  Bourbon notes?  Yeah.  But before we address that attempt at innovation in Canadian whisky, let's deal with the most alarming issue when you pour yourself a drink.

It's dark.  I mean seriously dark, amber, and opaque, like divining your significant other's reason for the blackest of moods without the use of words.

Color
What's going on here?  I think serious amounts of E150 (spirit caramel) were added to create the dark near coffee color.  I am not aware of any Canadian whisky or scotch for that matter that is dark as this whisky.  Even 25 year old single malts are not this dark.  An additive was used to get it that dark.  No doubt about it.  That being said, my first reaction is "so what?"  Adding caramel is usually in amounts that is not discernible to taste.  It is done to make the spirit more appealing to the eye and imply considerable aging.  In any case, I think they went over board on this one.


Nose (undiluted)
Cherries, vanilla, floral and perfumed.  Pleasant, masculine, but not what I would call 'refined' or 'memorable.'


Palate (undiluted)
Molasses, dark Christmas fruit cake with lots of rum in the recipe, vanilla, oak and then . . . WTF!(#*@Y*$(:  bourbon?  Yeah, serious bourbon notes.  That sure threw me for a curve.  It is down right odd to taste this amount of bourbon in a Canadian whisky.  If that is not weird enough, you get serious coca cola flavors and that unmistakable soda fizz too.

Finish (undiluted)
The finish is rum like.  I am talking Havana Club 7 years with more of that coca-cola-esque fizz/nip. 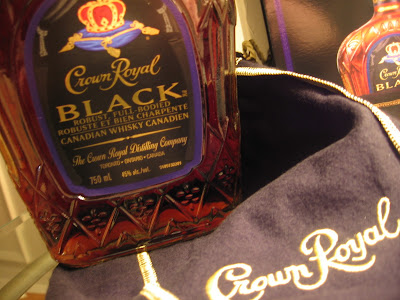 General Impressions
If this was served to me in a blind tasting, I would guess it was either an aged, dark rum or a bourbon of some kind.  I would never think of it as a Canadian whisky.  Matter of fact, if they lifted the blindfold off me, I would be shocked to see that I was drinking from a bottle labelled "Crown Royal," as Crown Royal Black has no connection with the standard Crown Royal flavor profile.  None, zero, nada.  The only similarities between these two spirits is the sharing of the same brand name, bottle shape and multinational corporate parent (Diageo).

Crown Royal Black strikes me as a genuine attempt by the master blender to break new ground, by blending a more robust Canadian whisky.  The trouble is that the bourbon notes are over the top, followed by dark rum tastes that goes too far from what makes a Canadian whisky great.  It is not wise to tamper with the immutable conventions of Canadian whisky, but unfortunately they have to their detriment.

I drink this and I am truly baffled.  Does this spirit want to be a rum or a bourbon?  A real existential crisis of sorts is going on.  An unpleasant exorcism is needed from my liquor cabinet.

In general, Canadian whisky is a medium bodied, smooth with a flourish of the spices of rye spirit.  Sure there can be variations where some whiskies are heavier than others or more spiced, but the paradigm does not permit huge bourbon flavors or rum notes.  If you want rum, buy rum.  If you want bourbon, buy American bourbon.  Drink Crown Royal Black and you will not know what to make of it.

On the positive side: (1) it is not biting, in spite of being 90 proof, (2) relatively smooth; (3) works as a party drink on the rocks or with mix.  If you visit the Crown Royal website, they even recommend drinking this on the rocks.  This is a party drink.  It is not intended as a companion to profound fire side chats to be consumed neat as the flames lick the logs and cast off interesting shadows.

For me, Crown Royal Black is an experiment that has failed.  It is baffling, like trying to figure out the meaning of REM lyrics.  The master blender needs to take note of how Randy Rhodes took the conventions of heavy metal guitar to new bounds by gently stretching with a few classical guitar landmarks (scales, minor keys, etc.), but not to the point of confusing the listener.  They still knew they were listening to a great heavy metal song.  Me, I am confused.  I am not sure I am drinking Canadian whisky, but rather some horrible bastardization that can't decide if it wants to be bourbon or dark rum. 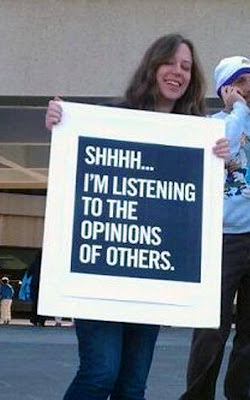 There are fans of this whisky, but clearly I am not one of them.  For an alternative opinion try the Canadian Whisky site (click here) for a review by it's critic, Davin de Kergommeaux.

Copyright © Jason Debly, 2009-2011. All rights reserved. Any and all use is prohibited without permission.  Of course, the song "Suicide Solution" belongs to Ozzy Osbourne and the Youtube link is posted merely for nostalgic and educational purposes.  Moreover, all rights concerning the photo of B.B. King are held by the photographer, Jean-Luc Ourlin.
Posted by Jason Debly at 1:28 AM