Let's do some free association.

Yes, the home of scotch.

C'mon.  There must be more?

But, sadly there isn't.  Most scotch and whisky fans and even some pompous, self-professed, Harris Tweed capped aficionados seem to have nothing to add, as they pull on their greyish whiskers.

Whisky Without Borders
Whisky has gone global.  Truly a global phenomenon.  Viral!  There are fans everywhere!  Many other non-traditional countries are producing whisky to satisfy growing domestic consumption.  One of the biggest consumers of whisky by volume in the world is India.

Indians love whisky.  So much so that they have been making their own dating back to 19th Century British rule. 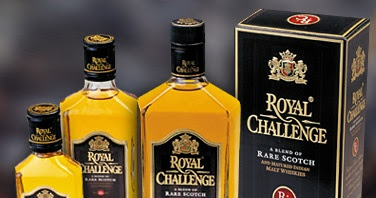 Indian whisky does not have the greatest reputation.  But, so what?  Neither did bourbon, Irish whisky, or this blog in the early days of development.  Everyone has to start somewhere and that somewhere is usually near the bottom. 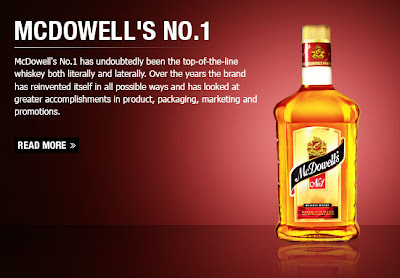 The poor regard for Indian whisky stems from the fact that much of it is distilled from fermented molasses, as opposed to malted barley.  These 'whiskies' are typically blends that may have a small amount of fermented mash that is barley in addition to the fermented molasses.  So, it's basically rum and would be labelled so outside of India.  Inside India, it's labelled "whisky."

Reading the labels can make for good entertainment too:  Bagpiper, Royal Challenge, McDowell's No. 1, Black Dog. 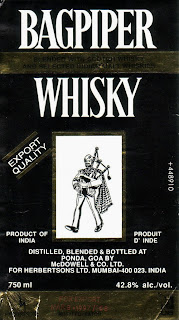 In spite of the valiant wannabe Scottish names, many of these spirits are, as I said above, hardly whisky, but rather rums that taste somewhat like whisky due to blending of roughly 10% malt whiskies from India and maybe a little from Scotland.  Anyhow, not great stuff.  Hence, the reputation.

Against this background of rum (flavored by way of some malt whisky added to the blend) and reckless product labelling is: hope.  'Hope' in the form of a single malt made in India.  Yes, single malt.  Remember, the barley can come from anywhere, so long as it is distilled at one distillery, it is single malt. 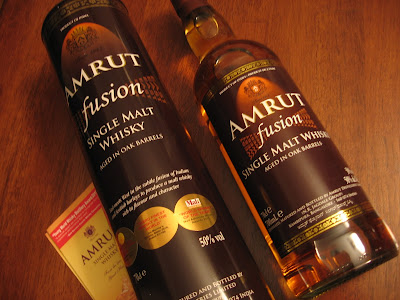 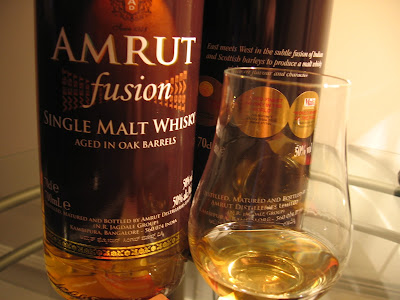 General Impressions
This is a big dog whisky!  50% abv!  But, I am happy to report that at no point is it rough, raw or volatile.  If you sip carefully, taking very little at a time, you will experience one helluva wallop of the aforementioned flavors.  Gigantic, towering skyscraper flavors demand your attention!  This is no shrinking violet or Leaning Tower of Pisa.

Amrut Fusion starts sweet for a nanosecond before going very, very dry!  Kinda reminds me of Highland Park 25 in the sense that it is very concentrated, powerful, heavy with flavors of dark fruit and pomegranate.  Unlike Highland Park 25 or many scotch whiskies, Amrut Fusion is not sherried.  As for peat, technically peated barley imported from Scotland is used in this whisky, but the peat is mostly lost by the time it is bottled.  It's there, but not in a significant amount.  Not a flaw.  Just an observation.

Add Water?
As I said before, this whisky is seriously huge in terms of flavor.

Think Don King's hair.  Still not clear?  Okay, think Donald Trump's ego. (The Freudian in me wonders if he is over compensating for some shortcoming in his life.  Donald, size really doesn't matter.  Melania still loves you for your money.) 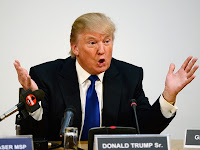 So, in light of the huge flavors, water is understandably a must for some people.  However, I find water must be used in small quantities with this gem of a whisky.  For example, adding a teaspoon to a double pour is too much.  Such a tactic tones down everything.  It may make it more palatable for the novice, but the trade-off is a loss of complexity of all those competing flavors of chocolate, black coffee, and oak, to name but a few.

India - Be Proud!!!!!
Amrut Fusion is good whisky!  A whisky India can be proud of and I am very happy to enjoy.  It was not too long ago that many scoffed at the thought of Japan producing good whisky, but now the reputation of several Japanese distilleries is held in high regard.  Brands like Suntory Yamazaki, Hibiki, Nikka and a host of others are excellent and can go head to head with some of the best scotch.  India appears to be on the same path!

P.S.  I recently corresponded with a reader (who will remain anonymous) in Bangalore about the whisky habits of Indians and it was fascinating.  Indians love whisky, but there is a tension with religious observance that frowns upon such consumption.  Here's a quote from his email:

"drinking in India .. largely [ except metros] is looked down uponbecause of our religious beliefs.. so you ll find friends only in thelarger cities.. one or 2 states even have prohibition like where i work
and alcohol sale is strictly a state monopoly.. very fewscotches are available..about India or Bangalore.. the drinking scene is very crowded bypeople who want to be/ are visible... those who wont be caught deadwith a teachers or any single malt below 15 years.. because its sounbecoming of the 'high life' they so wish to portray.and then there is the other group which includes people like me ...who are closet aficionados...  who will experiment, take notes [mental or otherwise] grow specific likes and dislikes.. this group issmall right now but it is growing.. here you ll find the teachers ,jim beam and the single malt men ... who ll argue till dawn and stillsmile and call it a day over a large  one with a splash of water..[ there is a cocktail... jim beam black + teachers+ jw black label..its called the three musketeers i think .. i got that made once at abar.. people thought i was mad or something.. but it was good ."

Copyright © Jason Debly, 2009-2012. All rights reserved. Any and all use is prohibited without permission. Note:  All images appearing in this article are for the purposes of nostalgia, education and entertainment.  Moreover, all images used are considered by the author to be significant in illustrating the subject matter, facilitating artistic/critical commentary, as it provides an immediate relevance to the reader more capably than the textual description.  Photograph of Sigmund Freud's sofa was taken by Konstantin Binder and is reproduced here pursuant to a GFDL license permitting reproduction in this post.  Photo of Donald Trump courtesy of Reuters.
Posted by Jason Debly at 7:22 PM

Email ThisBlogThis!Share to TwitterShare to FacebookShare to Pinterest
Labels: Amrut