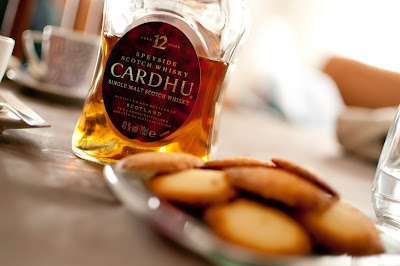 My first encounter with Cardhu was back in the mid-1980's.  College days. I had two friends, Keith and Jeff, who were huge fans of this malt.  While we played cards (hearts) on Saturday afternoons in Jeff's bright second floor apartment with buttery beams of sunlight pouring through huge windows of the old Victorian house, Soft Cell's rendition of Tainted Love, Def Leppard  and various Depeche Mode tunes (not my ideal choice) played accompaniment to my green bottles of Moosehead beer and the boys' tumblers of Cardhu.  In those days, I had absolutely no interest in scotch, and so never tried it.

Jeff was a very easygoing sort who imposed little on others, except at the card table: there was to be no discussion of  work.  He hated his job at a photo mat.  For a degree holder in history, working minimum wage developing photos all day was fairly soul sucking work.  Not that Keith and I were fulfilling our respective daseins.  I was trimming trees on a Christmas tree farm that summer while working towards a degree in philosophy that would make me uniquely qualified for academic life in the 18th century.  Keith was supposed to be doing a business degree, but he worked too many hours at his parent's Chinese restaurant and partied like it was 1999 every night.  Anyhow, so long as Keith and I adhered to Jeff's one little rule, we had a pretty good time.

Many years later, Keith still manages a Chinese restaurant, Jeff passed away in Halifax, and I (a swivel servant) found myself one bright and sunny day in a liquor store in New Hampshire staring at a bottle of Cardhu. 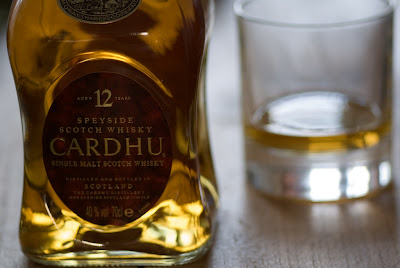 Fruity, apple blossoms, citrus and then some ashy peat with decaying leaves.

Palate (undiluted)
Initially gripping before transitioning to very sweet pears, apple, demerara sugar cubes, oak and vanilla.  Kinda like drinking the syrup of Delmonte's fruit cup with a flourish of spice and oak. 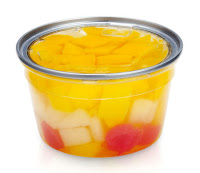 
General Impressions
This is a light bodied Speyside malt that is rounded, fairly soft and not offensive. I find it too sweet for my tastes and rather one dimensional.  I can understand why Jeff and Keith enjoyed it. They were scotch whisky novices back in the day, and Cardhu was gentle, so gentle, it made young men think they could drink the stuff of old men. 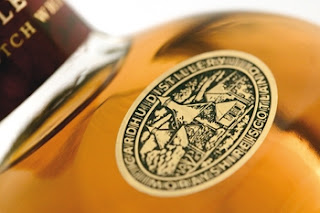 Price Point
This is cheaply priced for a 12 year old single malt. Around $40 in Arizona, New Hampshire and other places. I suppose if you are buying a gift for someone who likes Cutty Sark or Glenfiddich 12, then this will do the trick. For the price you get what you pay for: a straight forward/stereotypical/flaccid presentation of uninspiring citrus, honey flavors of Speyside with a hint of smoke.

Frankly, I much rather drink Chivas 12 year old. That's right I would reach for that blend before this single malt.  In fact, I would go further and suggest that if there was ever a single malt that could, in a blind tasting, pass for a blend, this would be it.  I guess it comes as no surprise that this gentle malt finds itself heavily used as a core malt of various blended scotch whiskies of the Johnnie Walker brand.

Conclusion
While I have great respect for Keith and the late Jeff, I can't recommend Cardhu.  Nevertheless, Jeff, I toast you now, wherever you are in the great unknown, knowing full well that you are strenuously objecting, but in the most polite speech: "Debly you don't know what you are talking about."

P.S.  I can't help but think that the master  blender of Cardhu was "phoning it in" with this weak effort in the 12 year old single malt market.

Copyright © Jason Debly, 2009-2012. All rights reserved. Any and all use is prohibited without permission except for photographs, as they are the intellectual property of the photographers, and may not be reproduced without their permission.  Photo credits:  (1) Photo of Cardhu and cookies taken by Dave Norfolk; (2) photo of Cardhu and tumbler by Mattie van Rijjen;  (3) Close up photo of bottle neck emblem by Flickr member Malt Whisky Trail.  Note: All images appearing in this article are for the purposes of nostalgia, education and entertainment. Moreover, all images used are considered by the author to be significant in illustrating the subject matter, facilitating artistic/critical commentary, as it provides an immediate relevance to the reader more capably than the textual description.
Posted by Jason Debly at 1:19 AM

Email ThisBlogThis!Share to TwitterShare to FacebookShare to Pinterest
Labels: Cardhu