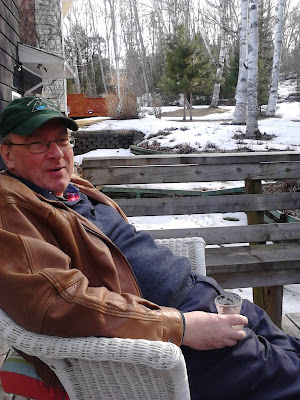 He looks like a straight shootin', astute whisky appreciatin,' sort of a guy.  He is, but suffers from a malt-based disorder that has not yet been recognized by the DSM.

George is a hoarder.  Not of the variety featured on television that have homes filled with all manner of  junk from everyday life.  He is a malt hoarder, single malt to be specific.

In his line of work (the sort that if you knew what he did for a living, and you saw him on a crosswalk, you might feel an uncontrollable urge to accelerate) he receives a lot of scotch whiskies as gifts.  Christmas presents, happy client displays of appreciation, opposing counsel grudgingly paying up on a bet, etc, all resulting in nicely boxed whiskies being left at reception.

Trouble is that he doesn't open these bottles because many are quite expensive, and he has this misplaced conviction that they must be saved for a 'special' occasion.  Of course, the special occasion never seems to materialize.  Instead they end up in his book case as bookends, and before he knows it, there is a veritable library of single malts competing in number with their hard cover brethren.

Space ran out on bookcases and so bottles ended up in drawers of dusty office desks.  I kid you not!  And they are all unopened.  This symptom of his affliction has made its presence known in his house too.  Fortunately, his very significant other, Lady J, has not allowed this condition to rise above the innocuous level in the home.  No bottles on couches, coffee tables or floor space.  They are around but tucked away in odd little places.  But, more on that later.

In any event, as you can see, this troubling malaise is a pattern of behavior that is characterized by excessive acquisition of and inability and unwillingness to open, consume and enjoy large numbers of scotch whisky bottles that can in extreme cases fill the living areas of home and even the work place.  This can cause significant distress for the sufferer.  George is not an extreme case . . . yet.  But, I do worry.

As you know, I am a compassionate person.  I have a big heart, so while I have no formal training in psychology, psychiatry or any health sciences for that matter, I am willing to come to the aid of a friend who is clearly suffering.  My therapeutic approach is subtle.  Put him in situations where he has to tap into his extensive malt collection.

"George, what's goin' on?" I ask.  I reach him at his office.  My wife left town with the kids, leaving me in an empty house with nothing to do on a bright Sunday afternoon.  I suppose I could have raked leaves, cleaned out the rain gutter or helped out with the laundry, but with a flick of my wrist, I banished such nonsense from my mind.

"I was thinkin' we could go get a pop somewhere," knowing full well in our sleepy little town (that another friend describes as dripping in Victorian drool) nary a watering hole would be open on this sunny day of rest.

"Nah, come over to the house and we can have a drink there." 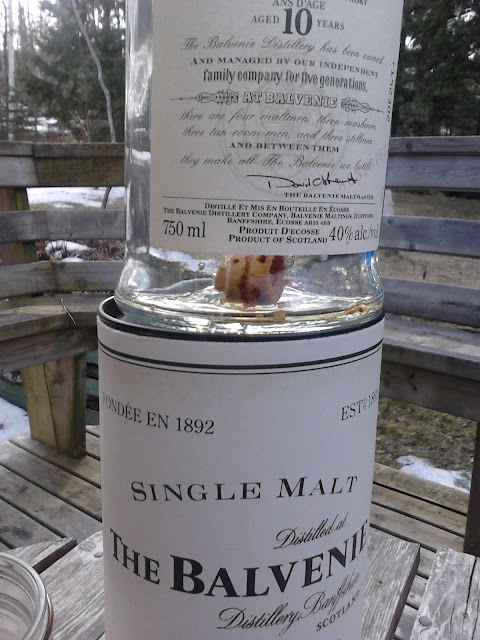 An hour or so later, I am kicking back on George's deck in the backyard.  The cool Spring air had a nip, but in his kitchen cupboard Lazy Susan there were bottles upon bottles of unopened single malts to keep us warm.  I was shocked at the condition of these vessels.  They were covered in dust, and clearly many had been sitting for a number of years.  I recognized some of those bottle labels from the 1980's. 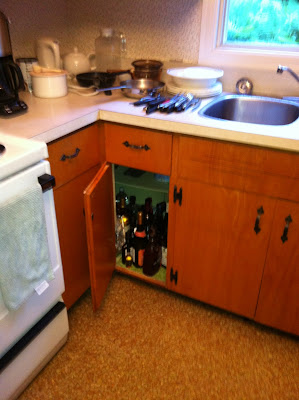 After some not so gentle nudging from me, George pulled out a bottle of Balvenie Founder's Reserve 10 years.  I believe it was discontinued in 2008 by the distillery.  Lady J remarked later at dinner that the bottle was probably 15 years old.  George disagreed, but I defer to Lady J in all matters involving memory and mental acuity. 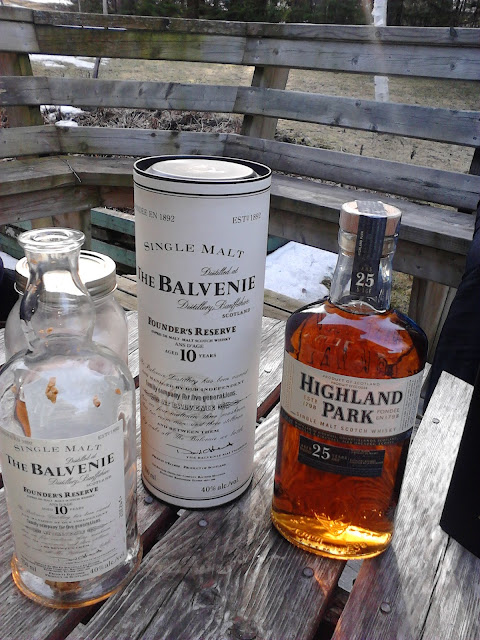 If you look at the bottle of  Balvenie Founder's Reserve pictured above, you will note it is empty and bits of cork are stuck to the glass wall.  Let me explain.  The bottle was so old that when attempting to open, the cap twisted clean off from the neck of the bottle leaving dry cork in the mouth.  Attempts to skewer the cork and pull it out cleanly with a knife were met with utter failure.  Failure meant dried bits of cork dropping into the single malt.  Emergency measures were taken.  A strainer was located, the whisky was poured through a strainer and into an empty mason jar. 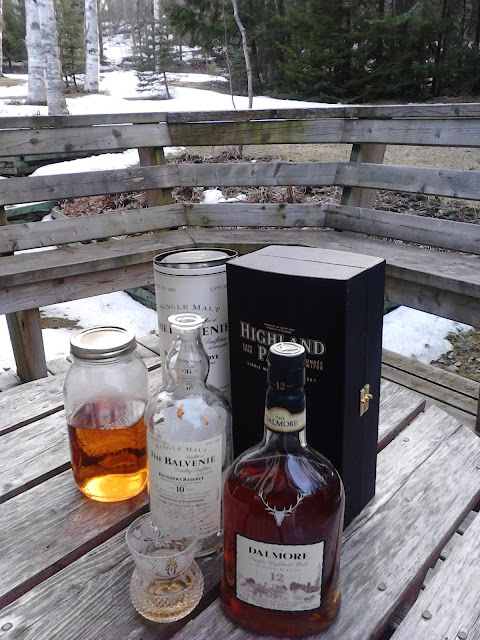 A dried out cork is one of the terrible consequences of malt hoarding.  Cork, once dried out, can allow oxygen to infiltrate the bottle and over time ruin the flavor profile of the malt.  So, with great trepidation I took a sip of the 10 year old Founder's Reserve.  Held it upon my palate for a moment, swallowed, and began to smile.  My intervention had resulted in enjoying this bottle before it became irretrievably oxidized.  I had saved it just in time!

This discontinued Balvenie was surprisingly good.  10 years may not seem like a long time for aging of good scotch, but it was enough with the ingredient Balvenie malt whiskies, some of which aged in bourbon casks, while others aged in sherry butts, before being brought together by the Malt Master David Stewart.  Stewart produced a sherried malt that was rich in currants, orange rind, plums and a teensy weensy puff of smoke.  Hit the spot perfectly on a chilly Spring afternoon. 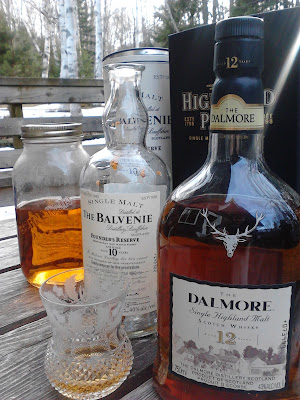 Next up was some Highland Park 25, but it was a new bottle, so nothing interesting to report.  It was good, but neither one of us was really in the mood for it.  What we were anxious to try was a bottle of Dalmore 12 years that looked like it belonged in a mid-80's GQ magazine advertisement.  Check out the label. 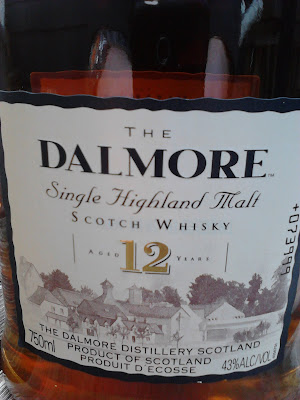 Anyhow, we pulled the cork and it didn't crumble.  I took a pull on this and it was so good!  Another delight!  Heavy sherry with complexity and great herbal notes.  Interesting and quite different from the current release.

This old bottle of Dalmore got me thinking about how these malts really do take you back in time.  Some whiskies had great character, which newer releases may not deliver.  I liked the old Dalmore so much, I just may have to pick up a new bottle and re-evaluate this classic.

After opening these three bottles with George, I felt my therapeutic intervention was successful.  There are many other bottles to explore, but those will have to be done on another house call, like doctors did back in the old days.  I have not completed my recommended treatment regime for this patient.  I foresee several further consults will be necessary to bring his condition to a manageable level.


Jason Debly
Copyright © Jason Debly, 2009-2013. All rights reserved. Any and all use is prohibited without permission.
Posted by Jason Debly at 12:32 AM