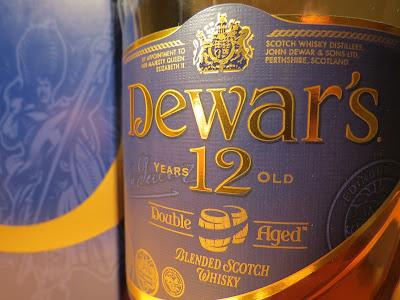 Under the Christmas tree, were two presents from the Wife.  I tore the wrapping paper off with gusto equal to my kids and discovered I had been gifted Bowmore 12 yrs and Dewar's 12.

"Yup!" and turned away so she could not read my ashen face.

My mind was already trying to scheme what of equal value I could exchange the Dewar's for.  Bowmore was a keeper, but Dewar's was one I intended to exchange.  And I mean exchange!  My last experience with that blend had not been pleasant.  A couple of years ago I bought a bottle and found it to be terrible.

Over the phone, on boxing day evening, I was lamenting to a friend the high cost of Scotch whisky.  Where I live (Canada) blends and single malt prices have gone through the roof in recent years.  Let me give you a few examples:

I mean $53 for Johnnie Walker Black?*&^%!!!!  What is the world coming to?  It seems that $75 is now the new threshold for a good 12 year old single malt.  Don't even thing about anything older.  For the really good stuff you are looking north of $100 in Canada, Australia, New Zealand and many other high tax states.

Part of the reason we have seen a trend as of late away from age statements (ie. Macallan) was that past demand was so strong (Taiwan +36%, India +29%) that drinks companies thought sales would continue to grow no matter what they did.  I can hear the suits in the C-Suite now: "Just keep that single malt tasting close to what it already tasted like.  They will never notice a few less years in the barrel or less 1st fill casks.  Hell, nearly all of them mix with ice and soda anyway."

Guess what?  I think guys like you and I have noticed, and we are doing what consumers in other areas of the economy have always done, we migrate to products offering better value for the dollar.

Canadian and American whiskies are enjoying a bit of a boom in sales as of late.  Quality is the best it has ever been and prices are very reasonable when compared to Scotch whisky.  And then there is rum!  Ever try some sipping rums?  Goslings?  Eldorado 12 years?  You can spend a lot less on those spirits and guys are catching on.

So, when I got off the phone, bearing all of the above in mind, I though "oh, what the hell, let's give the Dewar's 12yrs a go."  My New Year's Resolution will be to only review whiskies under the $100 price point and really try to find and review those bargains that deliver good quality.  Maybe Dewar's is a better blend than it was four or five years ago.  Blends can change in taste.  Sometimes it is an intentional decision by the suits in head office to task a master blender with changing the flavor profile to what they deem is 'mainstream' which is code word for stronger sales.  I really think this is what happened to Black Grouse.  When it burst on the market around 2003 it was a peat and iodine bomb with plenty of tar and smoke of Islay.  Try it today and it is not even recognizable to what it had once been.  It's sherried and grainier than it ever was. 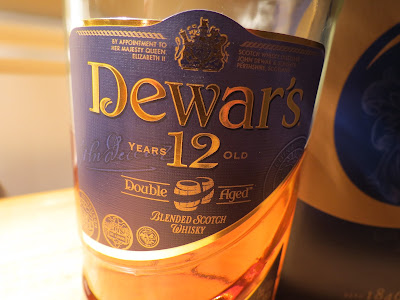 So, back to Dewar's, I decided to have a couple pulls with the most minimal of expectations.

Price
A lot cheaper than Johnnie Walker Black and Chivas 12 where I live.

General Impressions
This is really good in the blend category.  Definitely displays some sherry notes on the palate and then there is a very pleasant finish of malt, black licorice and dark toast.  Well balanced.  Not grainy either.  I was so shocked by my initial impressions that I revisited this bottle several times over the holidays and the flavors remained consistent.

The abv is 40% and I just have a gut feeling that this bottle might not taste so great if it was half empty and placed on a shelf for six months.  Dewar's 12 upon opening is a delight and remains for a while, but I have a sneaky suspicion that it does not respond well to oxidation.  I would finish this bottle within two months once the bottle falls below 50% full.

I would add Dewar's 12 to my list of 'comfort blends' that deliver good value for money.  I put this on par with Chivas 12 (another blend that seems to go flat in the bottle too soon after opening), but Johnnie Walker Black is still more interesting.  Black doesn't go flat.  It just remains really good.

So, I guess I should thank the Wife and also refrain from referring to her as the Wife (fortunately she never reads the blog - living with me is enough of a treat).

P.S.  Now that you have read this post, below is my video review.