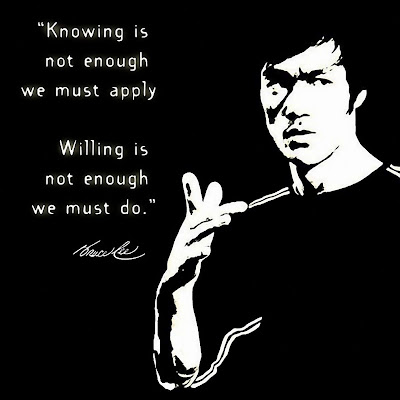 Keith paused to take a sip of the blended malt he brought back from Hong Kong ostensibly as a 'gift' for me, which I eventually paid for after listening to his Shogun-esque airport saga.  "It was a heavy bottle dude," he whined. "And, I was helping this Lucy Liu look-a-like through the airport, who was on crutches.  Jet ski accident.  We clicked like a Glock.  Know what I mean?"

I was sitting in his enormous basement bedroom, replete with aqua-green shag carpet, that had not changed much since high school.  The faux bamboo walls were adorned with creepy dark wooden masks of Polynesian Gods that stared back at me, as did my reflection in a rectangular mirror with a mortar and cluster of seashells frame that unkindly revealed I had more chins than a Hong Kong telephone book.  There was a lava lamp and a painting of a grass skirted hula hoop girl seductively gazing well past me.  I felt like I was in a Tiki bar in the South Pacific, but for the Bruce Lee posters and near life-size Millenium Falcon suspended from the ceiling.

"Knowing is not enough.  We must apply," he quoted his long-dead martial arts mentor with the intensity of Yoda.

He pointed at the Bruce Lee poster on his wall, that has been there since grade 9.  Seriously, grade 9!

"Debs you can take your blog to the next level if you apply the knowledge you have.  You have to embrace Twitter and Facebook.  They will drive traffic to your blog.  And you have to write more reviews and stop those stupid, off-beat tales of woe of your life.  Nobody wants to hear from Debbie Downer."

The plan was simple.  I was supposed to drop by this evening, pick up the bottle, have maybe one drink and leave.  But nothing is that simple with my Chinese-Canadian friend since primary school.  No, he was determined to lecture me on entrepreneurship and the potential of my blog.  I tried to be patient, but if he called me 'Debs' one more time I might have to bash his head in with the stormtrooper helmut sitting on top of the Sony Trinitron picture tube TV until his Mandarin shrieking mother comes downstairs and pulls me off him.

"That's a bit rich coming from you.  Whatever happened to some of your brilliant ideas?  Camo condoms?"  I proffered.

"Huh?"  Keith shifted in his wicker chair next to the king size waterbed, upon which were strewn black and white manga paperbacks.  I shuddered to think what a crime scene investigator would see with a black light in here.

"C'mon, you remember the camouflage condoms.  Last I heard, you were working on a logo.  What was the logo?"

"Or what about the mistletoe belt buckle?  The great holiday gift!  I even remember the branding you wanted to use: 'kiss me under the mistletoe."  I was still searching for one more product idea that he thought would make him millions.

"Yeah, yeah, but I almost had it with the chainmail bikini.  Damn prototype pinched when they sat down."

"Pinched?  Oh come on!  The poor college girl looked like she had welts after walking in it for ten minutes on the beach.  Not to mention that the metal heated up in the sun and burned her skin."

"It didn't burn her skin!"  He scrunched up his nose as his glasses were slipping.  I could hear his mother upstairs pound her foot on the kitchen floor, which was her subtle signal for us to lower our voices. 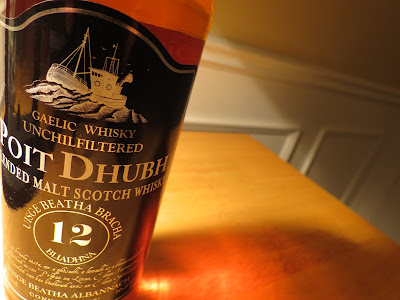 "So, what do you think of this?" I asked, trying to defuse the conversation.  I set my glass down next to an enormous conch shell.

Keith sniffed the shot glass, took a sip and nodded.  "I am tasting a lot of smoke and mackerel.  Online I read that the blend is made up of Talisker, Caol Ila and Tobermory."

Keith had an amazing memory and I had no doubt he read that.  I could find very little online written about Poit Dhubh, a 12 year old blended malt.  All I knew was that it was owned by a relatively small company (Praban na Linne Ltd.) located on the Isle of Skye.  Distribution is limited.

"On the nose, I am picking up dandelion, honey, oats, brine, sea air and some sherry."  I sniffed for more but wasn't getting anything else.

"Well, there is precious little sherry to taste.  I dunno how you nose sherry." He averted his gaze from the TV.  Anderson had gone to commercial.

"I smell it and I taste it."  I held up the bottle to the light of the lava lamp.  A pale malt with no caramel E150 coloring added either.  "No doubt about it, sherry is present on the palate, which I grant is a bit baffling given the reported core malts.  I think there may be some aging in ex-sherry casks of these peaty and smoky malts."

Keith was pensive.  A silence.  Maybe 30 seconds.  A record he quickly shattered:  "What I am getting on the palate is brine, wood smoke, lemons, and then some sherry, just slight.  A real melding of peat, smoke and slight sherry.  Interesting.  43% ABV and unchilfiltered.  This is good shit."

"On the finish I really taste Talisker.  There is a lemon seeds and pith note from the palate that remains on the finish along with a salty note that is Talisker.  Rosewood and oranges too.  You da man!  Thanks for picking this up!" I enthused. 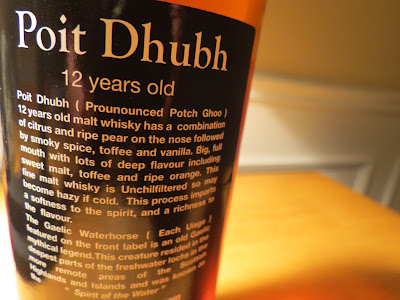 "How do you pronounce this?"

"Gaelic is a really strange language" Keith muttered.  Staring up at the poster of Bruce once more he said:

"Willing is not enough we must do."

P.S.  If you want a slightly more succinct review of this good blended malt Scotch, click on my video.