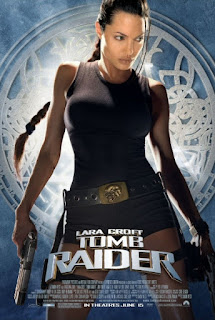 "Yesterday, my boss swung by my office and told me to come see her."

Keith paused, let out a triumphant belch, crushed his can of Schlitz upon his blue jean thigh and then continued.


Earlier this year, he had pinned to the gray fabric partition of his cubicle, a movie poster of the fictional video game character, the voluptuous British archaeologist/explorer, who passes her time ducking poisonous blow darts while trekking through ancient, dangerous tombs and ruins.  His white pressboard cubicle bookshelf was also adorned with Lara Croft figurines striking feisty action poses with big guns drawn, firearms that is.

Have I also mentioned he is 46 years old, a genius software coder, who lives in his mother's basement, and is my one of my best friends?  And, what does this say about me?  Leave that for another post.

Anyhow, to Keith's utter bewilderment, someone in the office took offence to his cinematic poster and action figure selections.  HR invited Keith to a windowless meeting room where they laid out the complaint.  In response, he invoked nonsensical freedom of expression arguments. He also protested, in vain, that no one complained about his Star Wars figures: bikini clad Princess Leia entwined with Jabba the Hutt.

In any event, his employer proffered what they termed a 'compromise.'  Either he make the poster and offending figurines disappear or he would be disappearing from the software company's payroll quicker than an arrow flies from Ms. Croft's crossbow.

"I still had Lara as my screensaver, and thought that maybe the boss was gonna whine about that."

His defiance reduced to a computer screen in sleep mode was not wise, and any attempt to warn him was dismissed with a wave of his pudgy mitt that clasped a fresh replacement to the recently compacted Schlitz can.  He had moved on to Old Milwaukee.

"Turns out, it was not about that at all.  She has a new idea for an app she wants me to work on.  It had nothing to do with the Tomb Raider."

Keith seemed to be trying to conjure up another belch, but his gastrointestinal tract would not cooperate.  Instead, my Chinese friend momentarily grimaced in effort while his lower lip quivered kinda like Jabba the Hutt.

We were in his sunny country kitchen and he was at his island gas grille expertly stirring sauce in one pan, and searing chunks of beef in another. Amidst the steaming pots and hissing frying pans, he would nonchalantly toss a dirty pot into the double sink from where he stood, a distance of about ten feet.  He had worked in Brussels, Lyon and his native Lancashire, not to mention a few places in the New World.

"She wants me to develop a whisky tasting note app."

The  braised Provençal beef was rib sticking fare of chunks of seared beef in a dark sauce that had duck fat, pre-glazed carrots, oven dried tomato, artichoke and turnip. Between this French dish, the tannic-of the soil red Bordeaux, and the crackling fireplace next to the kitchen table, I was listening without really understanding as Roger explained the recipe that Saturday afternoon in cold December.

Eventually, I could no longer follow the conversation of spices, repeated braising at certain intervals, the changes in pans, and oven cooking temperatures, to the point that my mind set sail on a river of Bordeaux and eventually came to the shore of whisky apps, no doubt inspired by Keith's tale of self-inflicted workplace woe.  And then a thought came to mind.  Maybe I should rate them all and let you know the best whisky app available.

The Best Whisky App of 2016
Here at Jason's Scotch Whisky Reviews, I and my team of testers (Keith and Roger) have spent the past month downloading every available whisky app onto our respective smartphones and computers in hopes of discovering the best whisky app for you.  I am happy to report that after surveying the marketplace, paying close attention to cost, availability, absence of software glitches, and a multitude of other performance metrics, we can report with authority that the best whisky tasting notes app is the: 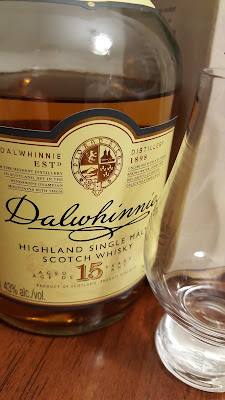 Whisky Bottle
Every whisky app has its strengths and weaknesses.  What we were particularly impressed with was how well the Whisky Bottle performed in areas where wifi was not available.  The display performed consistently.  Software updates were never a concern.  The label on each single malt Scotch bottle we tested provided us clear, easy to understand text, the name of the distillery, age statement, ABV and capacity (e.g. 750 ml).  Now, we must admit the font chosen by some brands took a little bit of getting used to, like take for example the bottle pictured above.  The "Dalwhinnie" script was a little different and not as simple as say the 16 point Times New Roman font that you might see on other bottles like say Johnnie Walker Black, but with a little time and possibly a libation or two, we were able to adapt.

Because we did not need wifi or a data plan to operate the Whisky Bottle, that meant it was very mobile.  Park benches, even in the rain, were no problem.  The interface display, namely the label did degrade somewhat during testing in a heavy downpour at a local park.  The ink on the label did seem to run a bit, but we just moved to the trees and under those mighty branches, the display significantly improved.  Plus it became more user friendly as the bottle was less slippery!

Software updates were naturally not a concern.  No patches needed here.  One's personal identity was not exposed to hacking, unless he downloaded too much of the Whisky Bottle content at the office Christmas party, and then started hitting on the waitress who happens to be his neighbor's daughter.  Then a user's identity or reputation could be put at risk. 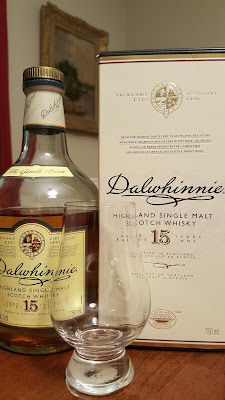 During our extensive testing we were comforted by not having to have access to an adequately charged smartphone to operate the Whisky Bottle.  While USB power cords, adapters and electrical outlets were not needed, there was one accessory that was a must: the Glencairn glass.  Without this user interface device, operation of the Whisky Bottle attracted stares from onlookers in restaurants, bars and the park we were in.  This in turn drew the unwanted attention of the police, who unceremoniously pulled out handcuffs when we explained we were doing field testing.

The Whisky Bottle, with Glencairn add-on, allows the user to draw their own conclusions and general impressions.  We found this much more readily accepted by the user than to rely on someone else's opinion, or sorting through endless Facebook and Twitter feeds.  With respect to Dalwhinnie 15 years, our testers had the following impressions:

Very sweet whisky that is devoid of sherry and peat.  Fortunately, it does transition mid-palate to become dryer, but overall a pretty sweet dram.  Newbies to whisky will certainly like this Highland Malt and prices tend to be good, so it is worth seeking out!

P.S.  If you don't like the Whisky Bottle app, as it is costly on a per bottle basis, try downloading a You Tube app and watch our review for free!