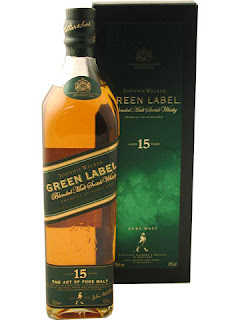 The vast majority of single malt scotch is produced for scotch blends. 80% of production is actually sold to companies that produce blends. However, whenever I speak to someone about scotch, they invariably turn their nose up at blends and insist that single malt scotch is superior. I think there is a lot of snobbery going on and little relation to the quality of flavour profile produced by blends. In fact, I have conducted some blind taste tests of blends served to such aquaintances, telling them we are sampling single malts and their praise is over flowing, until the truth is revealed and they are informed by me that they actually have been sampling high quality blends like Johnnie Walker Green Label or Ballantines 17 year old. They will grudgingly acknowledge it is good, but then start to ramble that they suspected "something was off" for a purported single malt. Nonsense, I say. For me, it is all about the taste and drinking experience. These scotch snobs think that the best scotch must be a single malt meaning that the scotch comes from one distillery only. Mind you, even such a single malt scotch is a blend of sorts. Specifically, it will be a blend of single malt scotches of different ages, but all from the same distillery. "Blended Malts" just take the blending process a little further by blending single malts from other distillerys.


In general blended scotch whisky is the combination of various single malt (varying in age) scotches with various grain whiskies (varying in age). The proportion of blends is usually 35% single malt and 65% grain whisky. Grain whiskies are cheaper to produce and are responsible for softening and even the sweet taste in scotch at times. In short, they take the harshness out of a single malt, and that is a good thing! But, too much grain whisky makes a blended scotch boring.  So, the task of the master blender is to find the right balance between the proportion of single malts and grain whiskys for that balanced, smooth yet interesting flavour profile.


Johnnie Walker Green Label is an interesting blend because it is a "vatted malt" meaning it is a blend of several different single malt whiskys with a minimum age of fifteen years, but no grain whisky is present. The principal single malts that go into this blend are: Talisker, Linkwood, Cragganmore and Caol Ila. Talisker is responsible for the smoke flavour, Cragganmore provides the sweetness and honey profile and Caol Ila provides the peat.The result is stunning.  It is approachable, smooth, interesting, attractive.

Suggested Serving
If you are a novice scotch drinker and find the taste of scotch overhwhelming on its own, try an ice cube or two. The ice will slightly dilute the scotch, which will result in taking the burn one typically experiences when nothing is added.  Scotch connosieurs will scoff at the idea of adding ice, but if you want to enjoy a fine drink and new to scotch, add an ice cube or two.

On the other hand, if you are not a newbie to scotch, then you must try Johnnie Walker Green label with half a teaspoon of water to a standard shot.  The water opens up this scotch beautifully making it more honeyed, floral and complex.  I cannot over emphasize the importance of adding a little water to this magnificent dram.  Without water it is very good, but add the water and it becomes stellar.


Palate
Initially a honeyed dram, surely due to the core malt of Cragganmore.  Honey gently expands across the palate followed by vanilla, moving to a drying sea spray (I realize this is an oxymoron) and pepper corns across the palate.  I recognize this taste to be unmistakably Talisker.


Final Comment
A very smooth, refined dram with some peat and smoke, but not overwhelming with a zing of pepper and sea salt on the finish. If you are looking for a dram that is not offensive but interesting, then look no further. Johnnie Walker is the best selling scotch in the world. In particular, its Red Label is a top world seller. This is probably due to the fact that the price is very reasonable.  Because Johnnie Walker is such a dominant player in the scotch market, I believe that it is the brand that some snobbish scotch drinkers love to hate. This is similar to the treatment of Microsoft by IT professionals. MS is the company they love to hate partly because it has been so successful.

Johnnie Walker Green Label is one of those premium blends that is just as good if not superior to many single malts (ie.  Glenfiddich 12 yrs, Glenlivet 12 yrs, etc.).


In any case enjoy!


Jason Debly
Psst!  I have a more recent review of this scotch here!