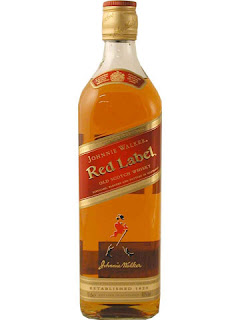 Let me start by . . .
saying: "I like Johnnie Walker Red Label!"
The critics and snooty self-appointed scotch connosieurs are no doubt aghast at such a declaration, but I say a "pox on them and all their kind!" to borrow the dialogue of the great novel by James Clavell, "Tai-Pan."


Johnnie Walker Red Label is probably the single most famous Scotch whisky in the world. I know in a previous review of Black Label, I made a similar statement, well, now I am clarifying it. Mention Scotch and people will think Red Label or at least the name of the producer, Johnnie Walker.  Moreover, it is the best selling blended Scotch in the world.


Unfortunately, you may not be doing yourself any favors by saying you like scotch if this is the dram people identify with you. On the other hand, this may work for you if you are trying to ward off the opposite sex the morning after that wild and regretable night before. Just have a half full bottle of Johnnie Walker Red Label in the end table next to your bed, reach for it in the morning, and say "I like Scotch, want some?" and you will probably be able to shake that mistake of a date from the night before. He or she will shake their head nervously, make an excuse that they gotta go to work, church, whatever (he or she is probably thinking "now where is the public health clinic?"), and with that look of disappointment on your face (that could win an academy award) you tell them to feel free to let themselves out, and you can roll over, breathe a sigh of relief, and say that prayer to God . . . you know the one: "I will never drink again."


Now why would ol' Johnnie Walker Red have such a bad reputation? I think it can be traced back to the critics, the spirits reviewers, who diss anything that is incredibly popular with the hard liquor consuming public. While your local town drunk may clutch this stuff like a teddy on the park bench at night, that doesn't mean it is bad. There's a reason it is one of the top selling blended scotches in the world.


Suggested Serving
Johnnie Walker Red Label is typically enjoyed as a key ingredient in mixed drinks and it works well in such a setting. I enjoy it neat too. Without the addition of ice or water, the scotch presents a sweet, peat and smoke tasting experience with plenty of heat on the finish, but most pleasant.


If you don't like the heat or the slight burn, then you need to add a bit of water (a 1/4 teaspoon) or ice to transform that burn or heat to a most pleasing warmth.


Nose
Heavy alcohol wafts up to the nose, mixed with some pine needles. Distillers of scotch whisky spend a tremendous amount of money trying to develop a beautiful nose. Red Label doesn't seem to have had a large research budget for the scents it offers up.


Palate
Sweet, candied like those gum balls you buy your child or niece at the local mall from those coin operated machines with the glass jar standing on stainless steel legs. Following the sweetness, it is chased by some peat and ginger that is very pleasant, but then comes some heat and burn (but with ice it is softened considerably).


Finish
Some peat and more sugar. If only the peat was stronger. The last sensation is a drying of the palate as the scotch is swallowed.


General Impressions
Toffee sweet, some peat, and a drying finish.


I was surprised that it was not as bad as I expected. I must admit, prior to sampling it, I had been swayed by all the negative comments I read on other websites about this spirit, as well as reviews by the so-called experts.


Johnnie Walker Red Label is an excellent entry level scoth for the novice who is experimenting in this wonderful world. It's a nice change from another worthy competitor: Teachers Highland Cream.


If you are totally new to buying scotch, it is worth a try as I suspect a novice will enjoy it more because of the sweet taste. You may enjoy it initially but will soon grow to appreciate others. On that basis it is worth buying. It is without a doubt a blended scotch targeting the market that uses scotch as mix in drinks and also for those scotch drinkers who are new to the spirit. It's sweetness will appeal to newcomers and the peat flavors will endear it to them also.


This blend is very popular in hot climates and I could see why. The sweet peat flavor profile with ice would be refreshing.

PS:  Here is an updated review of Johnnie Walker Red I did in 2015: