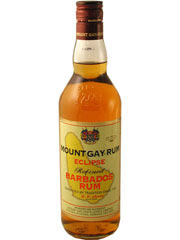 Hey! A Rum review on a Scotch Blog?
I know that the title of my blog is "Jason's Scotch Reviews." Nevertheless, I do add in the occasional review of another spirit when it is truly remarkable and I suspect my readers might be interested. Mount Gay Rum is such a spirit worthy of note.

Remember that All-Inclusive Caribbean Resort . . .
You know how you go down to Barbados, Jamaica, St. Lucia or another Caribbean island resort and find the rum and coke or rum based mixed drinks taste so much better than back home, and you can't figure it out because when you get back home, you buy the Bacardis or the Captain Morgan or whatever, make up your drink and it doesnt taste the same and you are dumbfounded and disappointed. Well, the reason for it is not the sunshine, the sandy beach, bath water temperature ocean at your feet and that hot tourist looking at you longingly. The reason is the rum. The rum you are drinking "down de island mon" is Mount Gay, mon, made from sugar cane, processed into molasses, aged in bourbon casks and served up in your drink. And guess what? They sell it in the United States. You just have to look for it, and if you are a little insecure, have a heart to heart with yourself and acknowledge that the name of this splendid spirit has no bearing on your sexual orientation.

Not Well Known in North America
This is not a well known rum in North America mainly due, I suspect, to a lack of advertising. In fact, I cannot recall any advertisements in the media. While it is not a bestseller, it is, without a doubt, a superior rum to all of its peers, without exception, and I am not exaggerating. People who know rum quickly acknowledge that it is very, very good. More people would drink it if it was more widely available. Needless to say, I am a huge fan of this rum, and the aim of this review is to convince you to try it.

A Message to the Rum Drinkers
I have a number of friends who identify themselves as principally, rum drinkers. A badge of honor of sorts, much like scotch and wine nuts, a category that I fall into. These rum drinking friends of mine are "Bacardi" or "Captain Morgan" drinkers or some other popular brand that have advertising campaigns that centre on pirate themes (a theme that struck fear into the hearts or should I say bowels of men during the last century, now seem to impress us). When I tell these guys they should try "Mount Gay" there is usually a snicker followed by some locker room reply like "sure, tinkerbell, I'll get right on that." So, I usually bring a bottle along to these neighborhood barbecues where the testosterone is coursing through the air much like fists flying at an Irish wake (ok, a little politically incorrect, but I am Irish, so I can make the dig). Matter of fact, I mixed one of these guys a rum and coke, handed it to him and said "drink! you fool" (complete with the Mr. T enunciation). He accepted it because it was free. A couple of swigs and he was nodding his approval. "Smooth, man, smooth. . ." He would be reaching for other words but not finding them. So, let me try. . .

Please Allow Me to Introduce Myself . . .
Mount Gay Eclipse Rum is produced in Barbados and this distiller claims quite legitimately to be one of the oldest rum producers in the world. This is indeed true. Rum has been produced for over 300 hundred years in the northern part of the island. Matter of fact, a Lieutenant William Gay and Ensign Abel Gay, back in 1663, bought a parcel of land in northern Barbados that came to be known as the "St. Lucy Estate." Since 1703, rum has been produced continuously from sugar cane, spring water and molasses. It is the sugar cane that gives it a very distinctive and inviting flavor that simply cannot be replicated by the big multinational conglomerates.So, now let's turn to the task at hand. A tasting note if you will:

Suggested Serving
In a nice crystal tumbler with some heft to it, mix yourself a double rum and coke. You might not be accustomed to mixing doubles (so do let me introduce you) as this rum is so smooth that you can luxuriate in the flavors without any and I mean any "bite" that you would normally associate with a double rum. So, indulge me on this point. You will thank me later.

Nose
Normally, rum is not known for being particularly friendly to the nose. Usually one has a fear of acetone inhallation. This rum does smell of alcohol, but beyond that there is some pleasing fragrance to be had. Some vanilla on the nose is what I detect.

Palate
Take in a generous mouthful, hold it for a sec, and you will experience very smooth and sweet vanilla flavors complimenting the classic rum notes of this wonderful drink. You will detect some oak, molasses and sugar cane.

Finish
And now for the grand finale, you swallow. Your brain tells you that you made a double and now you must brace yourself for the "bite" of the alcohol. Though you may brace yourself, the "bite" never comes. In its' place will be silky waves of more sweet vanilla/oak tinged rum that is swallowed. You will be emotionally transported back to that all-inclusive resort where you last tasted a rum and coke this wonderful.Having downed the drink, there is no accompanying burn or heat, just the faintest embers of warmth (like the camp fire on the sandy beach), and the flavor is gone, leaving you with the enviable task of considering when to take another drink.

General Impressions
When I drink this rum, I am impressed by how smooth and totally inoffensive this rum is. Words like "silk", "refined" and "polished" seem most appropriate. You can pour your drinks very strong yet, they are smooth and still no bite. That is how smooth it is.It was only two weekends ago that I introduced my friend to this rum at the barbecue and a week later he sheepishly told me he picked up a bottle until his wife piped up and said "I had to go in and buy it. He made me. Next time he can buy it and I will take a marker and change the "G" in Gay to a "B" so that his buddies will think he is drinking 'Mount Bay". In that way his manhood remains intact."

Bottom Line
Buy this rum. You will not be disappointed. I normally do not like rum, but I make an exception for this one. Buy it!