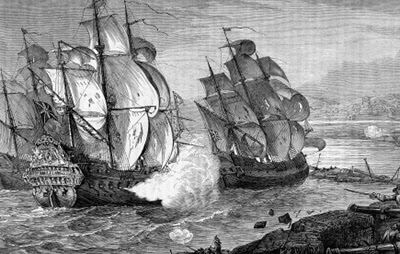 "Number three gun crew an extra tot of rum!" roared Dirk Struan, Scottish merchant captain of his British Clipper, China Cloud, in the emerald green, wind-swept waters off Hong Kong, as the sailors and their captain prepared for battle with circling pirate ships.  (An historically accurate bit of dialogue taken from the well-researched novel  Tai-Pan by James Clavell.  Captains of ships in the 18th and 19th centuries sometimes chose to give their men an extra 'tot' of rum just prior to battle).

When I first read the novel, Tai-Pan, many years ago, I couldn't imagine drinking rum straight and hardly thought of it as a reward for the gruelling work of sailors.  But, evidently rum was very much a reward and actually a daily ration or 'tot' as it was called.

The British Navy, as far back as 1655 gave a daily ration of one pint of rum.  Around 1740 it would be reduced to half a pint and sometimes mixed with boiling water and limes and called 'grog' in an effort to manage the drunkenness of sailors.  And guess what?  The British Navy did not stop the practice of the daily rum ration until 1970!

It should be noted that the rum drank in the 17th and 18th century by British Navy sailors was brutal stuff.    Wikipedia cites a document dated 1651 from Barbados which describes rum of that time as "the chief fuddling they make in the island is Rumbullion, alias Kill-Divil, and this is made of sugar canes distilled, a hot, hellish, and terrible liquor."  You know it's gonna be harsh when a spirit has a nickname that references the supernatural source of all evil like "Kill-Divil" or "Kill-Devil."

Anyway, where was I?  Oh yeah, drinking rum straight was not something I imagined I would ever enjoy.  But, last summer a neighbour of mine, back from Cuba, had a bottle of Havana Club 7 year old rum that he encouraged I and a few others to sip.  I reluctantly did, and it was good! 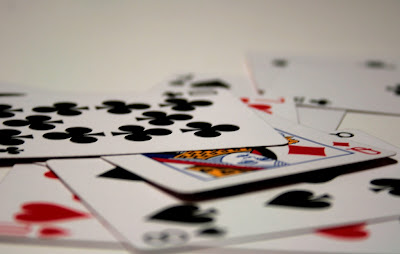 About a year later, I found myself at a friend's place playing cards.  Everyone had a drink in hand except for me, not that I was susceptible to peer pressure.  In any event, Victor had beer, Jameson Irish Whiskey (no-age-statement) and Sailor Jerry.  I was not in the mood for beer, certainly not Jameson, so that left the Sailor Jerry.  What the hell I thought.  Let's give it a go.

"You want coke or ginger ale with that?" Victor asked. 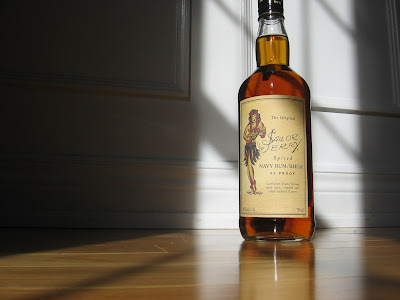 And guess what?  It's good too!

Palate (undiluted)
The big vanilla of the nose, comes through mightily on the palate, chased by oak, brown sugar, chewy cedar, and maple sugar.

Finish (undiluted)
Nice long lasting flavors of spiced caramel drying on the palate leaving balsa wood.  The spiciness on the finish is reminiscent of a good measure of nutmeg you taste in egg nog.  The finish is rewarding and amazingly not hot or biting in spite of this rum being 92 proof! 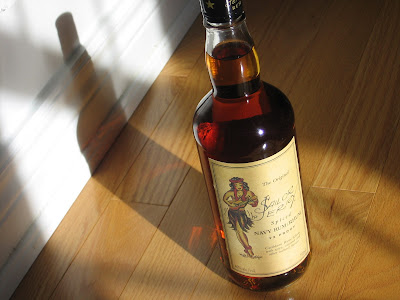 Affordable!
Great price point on this rum.  It is not expensive.  Maybe a couple more dollars than the usual Captain Morgan and the like, but unlike the latter, you will enjoy a smooth rum that is enjoyable neat.  You cannot say that for a lot of rum.  One of my favorites is Mount Gay Eclipse rum, but neat, is another story.  It tastes far too sweet.

Complexity?
What makes scotch whisky special is its complexity of flavors.  There is so much going on in the taste experience that I often liken it to a finely woven tapestry or Persian carpet.

Sailor Jerry is not that.

Sailor Jerry is a very pleasant, chill-out, hang with your friends or stare at the beach and the bikinis littered on it and think of nothing else kind of a beverage.  Very hedonistic with little or no cerebral activity going on.  Activity that I am uniquely qualified to windily pontificate about.

So, complex, it is not.  Given the price point, you are presented with a nice, self-indulgent rum experience, that hints at the greatness awaiting for those daring among you, who will spend more to enjoy truly great rum which should never be mixed with anything, much like good scotch. 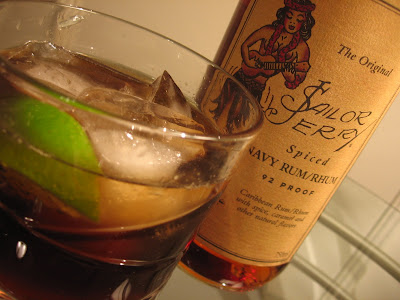 Rum and Coke Anyone?
Sailor Jerry, coke, ice and a slice of lime makes for a very nice mixed drink too.  This rum is distinct from others because of the towering taste of spiced vanilla seasoning and the absence of any bite, in spite of the higher than normal ABV.  If you like clipper ship size vanilla flavor in your rum, then you will truly enjoy Sailor Jerry.  The lime is a must too!

Next time you buy rum, try this both as mix or neat/on the rocks as a pleasant diversion from scotch whisky.

And that's it for now.  A whisky blog that sternly refuses to take a bow!

P.S.  Next week I will be back to more scotch whisky reviews.

Copyright © Jason Debly, 2009-2012. All rights reserved. Any and all use is prohibited without permission.  Note:  Photograph of cards is by Flickr member: Robadob.  His photograph is used here with his permission, but he still retains all copyright.  Accordingly, you may not reproduce it without his permission.
Posted by Jason Debly at 11:25 PM