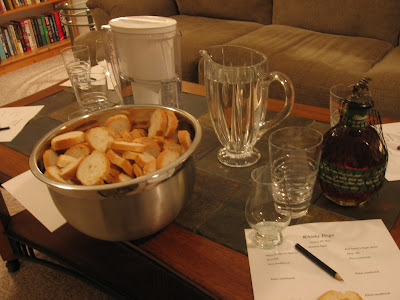 Hoping all is well with you as we enter into the darker time of our year. As I'm sure you don't remember, I began a scotch journey in earnest this time last year. Never one to do much subtly, I'm pleased to tell you that I experienced 35 scotches in the past 12 months (39 if you count the little 1/3 ounce sips that they give you at Binny's on the way to buy what you really came for). In this time I discovered that there are some stark realities we each have to come to terms with.

First of all, it's a freaking expensive hobby, especially when you've just opened a bottle and two weeks later you're Jonesing to buy something else.


Two, it's immensely fun to get together and share bottles for the sake of expanding horizons.

Three, it matters but really doesn't matter what reviewers and bloggers say, as it's my bottle damn it and I'll do with it what I want and have my own opinion of it world be damned!

Four, its really hard to like an Islay without a cigar, and not being a cigar smoker that would just be another expensive hobby to add to the current expensive hobby (the Ardbeg Uigeadail was completely un-understandable to this palate but smoking a Montecristo next to a small bonfire in the yard in October it transformed into one of the sweetest, syrupy delightful malts ever to touch this mouth!! - AND oh if I could just get that Laphroaig Quarter Cask back to give it the same test).

Five, I love spicy scotch top to bottom of the bottle but sherried scotch one glass at a time with one special dinner plate and guest.

Six, my house should always have a member of the Glenmorangie and Highland Park families and shame on me if I can't provide that.

Seven, good luck finding the Honda Accord of scotches, the best to date that I can recommend being Monkey Shoulder ($27 in Chicago) which I had the great fortune of two bottles separated by six months, the second a gift when I was in the middle of the Glenfiddich Solera 15 -- this being a very important distinction of serendipity and synchronicity as they are both vatted malts from basically of the same family and side by side there's no doubt the Monkey Shoulder is its younger brother but hardly less so in stature.

Eight, good fortune shines on scotch enthusiasts, one example my chance meeting with Steve Lipp the CEO of Alexander Murray who private labels for Costco, Trader Joe's, etc.. I liked him so I bought from him, loved the prices and discovered only one dud (the TJ Highland 10) out of 5 tries, and one exceptional gem, the just released Kirkland Highland 16 for $49, which is so smooth, elegant, perfectly sweet, subtly complex with a light spicy finish (kind of like the Dalwhinnie 15) and unfathomably drinkable - a friend and I took down 3/4 of a bottle 10/30/15 (yes there was another fire and some medium caliber Davidoff's in the mix that gave the evening a Sodium Pentathol quality).

Nine, you'll always encounter something you don't like but can pawn it off on some other scotch drinker to their pleasure as they're so happy to meet someone with good scotch in the cabinet.

Ten, somehow, someway, bottles somehow make a difference as I was so disappointed in my Balvenie Doublewood 12 last December but thrilled with it last month with good company, brats and german potato salad (I promised Warren I wouldn't drink it again until we get together again - a big deal since it had been 3 years!).

Thanks for helping on the journey.

PS Eleven, JWBlue while terrific is grossly overpriced!!! I'm saving up for Highland Park 18...
Posted by Jason Debly at 4:57 PM