In his book, the Whisky Bible 2016, Jim Murray declares Crown Royal Northern Harvest Rye to be the "World Whisky of the Year."  Another quote of Mr. Murray's praise for this Canadian whisky:

"To say this is a masterpiece is barely doing it justice."

Being Canadian, I was proud and at the same time dismayed because I was happy Canadian whisky was getting international recognition, but worried about the source of the attention.

Jim Murray has a history of making baffling selections for best whisky.  In 2013, he awarded Sullivans Cove French Oak Cask the best single malt of the Southern Hemisphere.   A whisky that several members of my whisky club purchased and decided was the worst whisky they ever tasted period.  I found it to be terrible.  A bizarre selection we thought.

In 2011, he assessed Ballantine's Finest 17 year old blended Scotch to be the best whisky in the world, even better than all world single malts.  I do not have a problem with a blend being declared better than a single malt, indeed Hibiki 17 or 21 yrs is a prime example of a blended whisky that beats out the vast majority of single malts in its price range, but for Ballantine's to beat all whiskies, I found that hard to accept.  I bought a bottle and wrote about my disappointment: here. 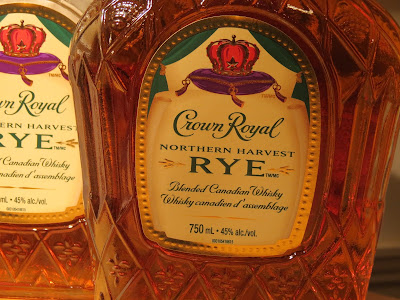 So, here we are again, he has selected a Crown Royal release, Northern Harvest Rye, to be the best world whisky for 2016.

It is that good?

Jason, have you tried it?

Jason, are you going to review it?

In the past week, I have probably received about fifty such emails.  This blog gets about 75,000 hits a month and has had 3.7 million hits to date, and guess what they are all looking for?  As of late, a review of Crown Royal Northern Harvest Rye.  It does not matter that the whole concept of best whisky in the world is absurd, people want to know if this selection is any good?  You want to know, and you know what?  I want to know!  So, I bought two bottles.

Age
No information is available with respect to the constituent whiskies.  If I had to guess I would say a lot of younger (ie. 3-6yrs) whiskies are present. 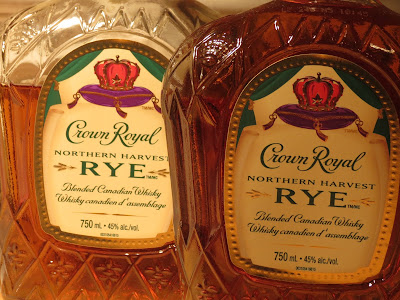 General Impressions
Upon opening this bottle two nights ago, I found this whisky tasting young, untame and a little raw.  The following night, it was the same.  Tonight, it has smoothed out a fair bit and is drinking gentler.  Oxidation can be a good thing.

Adding water doesn't improve the flavor profile.  Just smooths it out.  While it is 45% ABV, it is not strong or over the top with rye flavors.

I think for $35 you are getting fair value for money.  I think it is not a great whisky because it lacks great complexity.  The flavors are not simple, but not sufficiently refined to make me sit back in awe, as some other whiskies have done.  Really, for a whisky to be great in my eyes, it has to exhibit amazing complexity that leaves you blissed out.  It's not happening here.  There are the beginnings of complexity but only the beginnings.  And again, I do not find this whisky to be what I would call refined.

In my video review of last night, I observed the whisky tasted young and raw.  Tonight, it is more tame with time in the bottle and some extra air in there.  Still not knocking my socks off.

(3)  Gibson's Finest 18 is classic Canadian whisky, smooth, totally inoffensive, but with some substance.  Price is sharking up though.  I still think it is a great example of Canadian whisky. 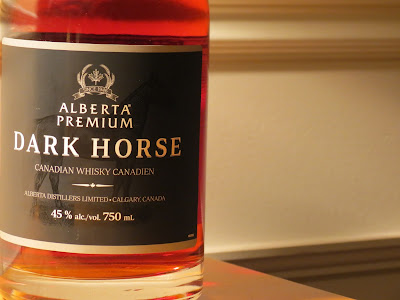 The availability of Crown Royal Northern Harvest Rye is going to be a problem for most of you reading this review. I was fortunate to get a couple of bottles due to sheer perseverance with a certain retailer.  But, what do you do if you can't get a bottle and still seek a nice Canadian rye of similar quality and price point?  Please consider Alberta Premium Dark Horse.

Age
No age statement on bottle label, but we do know that Dark Horse is comprised of 12 year old rye whisky and 6 year old small pot rye.  Added to this is an 8% dollop of aged corn whisky and actual sherry wine has been added to the blend.  Very high rye content overall.  Aged in heavily charred American white oak barrels.

General Impressions
The flavors are deeper, with notes of brown sugar, port, sherry, and of course plenty of rye, but the rye is swaddled in the aforementioned flavors that makes it truly interesting and very comforting at the same time.  The price and great quality make this what Teacher's Highland Cream once was to blended Scotch, great value/bargain blend.

In a match-up with Crown Royal Northern Harvest Rye, I am going to grab Dark Horse every time, save $5 and enjoy better flavors. 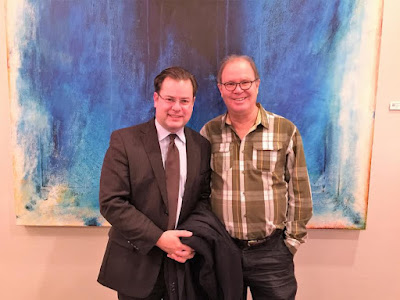 I ran into Davin de Kergommeaux at a recent whisky festival. He is the leading authority on Canadian whisky and if you want to learn more, please visit his website: http://www.canadianwhisky.org/  You will get plenty of ideas in your exploration of Canadian whisky and learn that this spirit is no longer simply the smooth cocktail mix of your parent's 1970s toga parties.

P.S.  Crown Royal Northern Harvest Rye is no masterpiece of whisky.  For a masterpiece, see my next review.
Posted by Jason Debly at 12:31 AM